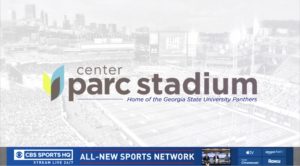 “We are thrilled to be a partner with a socially conscious organization like Center Parc,” Mark Becker, GSU’s president said in a statement. “We believe it will have a great impact on our community as well as our university and our athletic program.”

Center Parc also is to provide programs on financial education and literacy programs in the stadium neighborhood, Center Parc President/CEO Chuck Head said in a conversation streamed on a GSU website. The planned programs grew from conversations with Becker, Head said.

“In early conversations with President Becker, that was one of the things that we really drove home,” Head said. “He has a genuine passion for that – to help the community around the university. I told him that is exactly in our wheelhouse. That’s exactly what we want to do. We are prepared for that. We’ve been doing it for 95 years.”

Center Parc is in the process of opening two branches in the stadium area, Head said. One is to be located in a postal facility on Marietta Street, and a second is to be established in the vicinity of the stadium.

Center Parc is a division of the Atlanta Postal Credit Union, which is registered as non-profit organization in Georgia. The company has branches in 11 counties in Georgia and North Carolina; it serves more than 99,000 members and has total assets above $2 billion, according to the GSU statement. 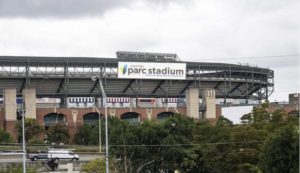 Amy Fuller, chief strategy officer for Center Parc and APCU, said in the statement that the naming rights agreement is a good fit with the company’s growth plans.

“Center Parc Credit Union is both an emerging force and historically significant, much like Georgia State University,” Fuller said. “Center Parc is ready to serve the students, faculty, staff, alumni and fans of Georgia State and members of the surrounding community.”

The legacy of the stadium appears to be a significant factor in the credit union’s decision to sign the agreement. Head spoke of the role of both this stadium, and the prior ballfield. The GSU streaming page includes a video of highlights of past sporting events held there.

“In 1966, the Braves moved to Atlanta and the Atlanta Fulton County Stadium,” Head said. “In 1974, Hank Aaron hits the 715th home run. All that is right across the street from the stadium.

“Then Atlanta hosts the world Olympics, with the centerpiece being this stadium, in 1996,” Head said. “Then it evolved to being the Braves home stadium. They moved up to the north part of Atlanta and Georgia State University takes the opportunity to purchase this and really work with it.

“We are so impressed with what they’ve done with the stadium,” Head said. “And to be part of this Atlanta legacy, just the stadium itself, and the area, and to know they are developing it they way they are. We are excited to be part of it.”