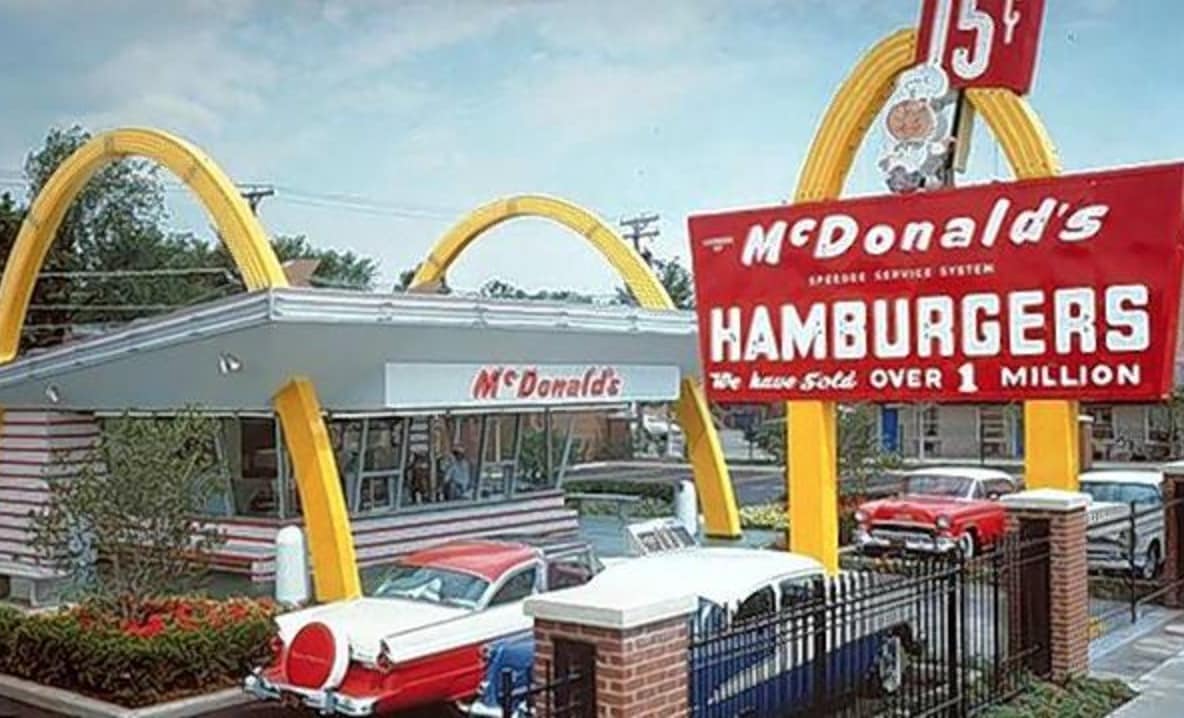 A central question of 'The Founder' is: Who knows what the world's nutritional profile may have been today if a vulture named Ray Kroc took McDonald's away from its founders, and it hadn't become global behemoth? Credit: dailyherald.com
Share6
Tweet
Share
Pin
Pocket
WhatsApp
Buffer
Email
Reddit
6 Shares

To paraphrase Shakespeare, “What’s in a name? A rose by any other name would smell as sweet.”

Not according to Ray Kroc, the man who super-sized McDonald’s before Morgan Spurlock was a twinkle in anyone’s eye. 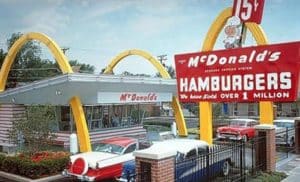 A central question of ‘The Founder’ is: Who knows what the world’s nutritional profile may have been today if a vulture named Ray Kroc took McDonald’s away from its founders, and it hadn’t become global behemoth? Credit: dailyherald.com

Kroc, as you may know, is the man who, in the 1950s, took a mom-and-pop – well, bro-and-bro – fast-food operation in San Bernardino, California, and turned it into the global behemoth we know today.

Directed by John Lee Hancock (“The Blind Side,” “Saving Mr. Banks”), “The Founder” is the story of how Kroc, played with chilling rapscallion charm by Michael Keaton, took it all away from the McDonald brothers, Dick (Nick Offerman) and Mac (John Carroll Lynch).

And in the end, if we are to believe Kroc/Keaton, it wasn’t just the superbly efficient food-delivery model – burgers, fries and a shake in 30 seconds – that he had to have.  It was the name: McDonald’s.

“It sounded wholesome and genuine,” he tells the brothers as he downsizes them into nothingness. “It sounds like America.”

Kroc knew branding before branding knew itself. As the film begins, he’s a traveling salesman, trying to unload multi-mix milkshake dispensers. He’s no con man a la “The Music Man’s” Harold Hill (at least, not yet).  He tries hard, but it’s a hard sell. Nobody is buying.

And then comes a call from the McDonalds.  They need eight machines. Maybe more. Kroc needs to know why manna is falling from heaven in a tiny California town. 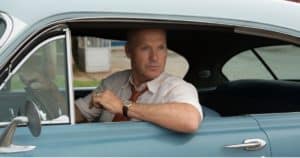 Michael Keaton portrays Ray Kroc as a charming salesman who steals a business out from under the feet of its founders. Credit: vuture.com

What he learns is, God is not in the machine. He’s in the details. In the way – as the brothers so proudly show him – the whole operation is set up. Not just blazingly efficient, but also family-friendly. Almost immediately, visions of dollar signs dance in Kroc’s head.

But the brothers have tried franchising and they didn’t like the lack of quality control.  Kroc needs a better sell. He gets it when, as he continues his door-to-door rounds, he notices two constants in Everytown America: A church steeple and a flag.

Do it for your country, he implores Mac and Dick. McDonalds can be “a new American church, open seven days a week.”

It’s God, country and apple pie (though the actual fried pies would come much later).

And so it begins.

It is also, for the brothers, the beginning of the end. Kroc takes over incrementally. It could be adding Coke to the menu (in exchange, Coke gets great product placement). Or milkshakes made without any actual milk (not just cheaper, but eliminates the need for a refrigeration unit). Eventually, he creates The McDonalds Corp., which is, in essence, a real estate company (owning the land on which the franchises sit makes you more money, explains a smartie played by B.J. Novak). The McDonalds themselves have no part in it. 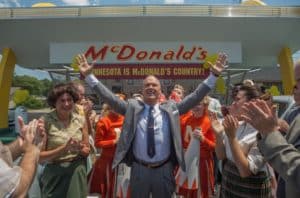 Ray Kroc built the McDonald’s brand even as he whittled away quality controls to which the founders adhered – such as using actual milk in milkshakes. Credit: teaser-trailer.com

Keaton is simply dazzling. He’s an all-American monster directly descended from the shrewd Yankee trader.  Yet the movie doesn’t want us to only see him as such, which can be slightly confusing. Is “The Founder” – the title comes from what Kroc starts calling himself on his business cards when he has clearly “founded” nothing – a satire or a tragedy?

Actually, it’s a bit of both, which is what ultimately gives the picture its power. Yes, we’re as charmed by Keaton as the McDonalds were. And yes, we see his sleazy side long before they ever do. We are somehow complicit – and not.

Initially, this can be confusing; we want to understand more clearly the journey we’re taking. But then you realize the film has a … well … teasing disinclination to commit to one easily-categorized point of view, which serves as a huge asset. It’s like the movies Hollywood used to make, back in the ‘70s and early ‘80s, when we had to do a little thinking for ourselves. Movies about which we may not all come to the same conclusion.

Kroc is clearly a villain … of a sort. But he’s also The Future. If the McDonald brothers had had it their way (oops, Burger King reference), most of us would’ve never heard of a Big Mac or Chicken McNuggets. Whether the culture – to say nothing of our nation’s nutritional profile – would’ve been better off, well, that’s not what “The Founder” is about.

Rather, it’s a sly and sometimes melancholy look at what makes America, um, America.  “The Founder” is a tough-minded cautionary tale, but it’s also a stupendous character study. Did Kroc start out as a monster or did opportunity turn him into one? And what’s so wrong with wanting to make America great again? I mean, wanting to make America eat again. And again. And again…