The annual France-Atlanta event series is back for its 13th year, a six-week program focused on innovation, creating transatlantic connections and exchanging knowledge in the fields of culture, humanitarian affairs, science and business. The 2022 event series runs from Sept. 15 to Nov. 3. Most of the events are free, and anyone is welcome to join.

Since its inception, the series has attracted a cumulative 30,000 participants — ranging from experts, students and residents — engaging in a wide range of discussions and workshops about culture, science and business.

The event series was co-founded and organized by the Consulate General of France in Atlanta and the Georgia Institute of Technology. France-Atlanta was established in 2010 to “breathe new life” into French-American relationships, particularly in the Southeast, attracting over 3,500 participants its first year.

Rami Abi-Akl, French Consulate science and technology attaché, describes the collaboration between Atlanta and France as “important on many levels.” Between the city’s highly-regarded universities, the “great talent in Atlanta” and mutual values, the Consulate team wants to continue to foster a relationship that benefits the transatlantic communities. 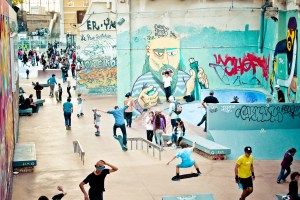 “The value of improving the life of humankind is shared everywhere. But beyond this, Atlanta and France have shared values to be more inclusive and diverse,” Abi-Akl said. “These values might not be shared with everyone but it’s very important here in Atlanta and it’s important in France.”

In many ways, Abi-Akl describes this partnership as an investment in our collective future.

Each year, the programming is catered to the interests in Atlanta and France, and this year, most events focus on current hot-topic issues like global health, supply chains, sustainability and urban culture. 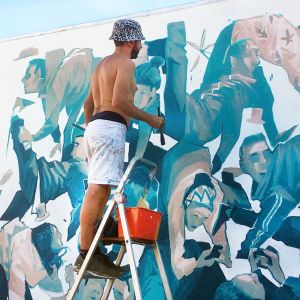 In partnership with CITY CITÉ, France-Atlanta and the ELEVATE art festival, Marseille-based muralist Difuz is working on a piece in downtown Atlanta. (Photo courtesy of France-Atlanta.)

One of the many questions posed: What’s the role of culture in our city’s development? This year’s line-up examines that question through CITY CITÉ, a program focused on urban issues and city planning created by Villa Albertine.

Established in 2015, CITY CITÉ is coming to Atlanta for the first time, hosting discussions and artistic programming highlighting connections in culture, urban development and society between Atlanta and Marseille, France. Both cities are Southeastern capitals with rich, complex histories and incubators for well known rappers. The mini-event series will host Marseille’s Friche la Belle de Mai and a group of French urban planners, architects and artists who will examine the role of cultural infrastructure with their counterparts in Atlanta.

The nonprofit will also host students from Georgia Tech, Emory University, one Canadian university and six European universities for AI and Health Disparities on a Global Stage. After six weeks of preparation, the students are challenged to debate about artificial intelligence and how we can ensure that it’s designed to help address health inequities, not increase the disparities.

There are also more hands-off events offered, like “Making Pandemics,” an event where culture and science meet. The 100-minute documentary follows a woman who seeks to understand the links between human health and the health of ecosystems during this “epidemic of pandemics.”

As the first time the entire series is offered in-person since the start of the pandemic, the team is particularly excited for this year’s France-Atlanta event series. Abi-Akl welcomes anyone to join and hopes that attendees walk away with new connections, ideas and a feeling that they’re part of a new community.

“We want the community to know each other because when scientists talk to each other, new ideas emerge and collaborations emerge. Same thing for technology or business,” he said. “We also want them to feel welcome, like ‘I belong to this community and I can thrive [here].’ [Lastly, we want] them to walk away with ideas because we don’t want passive participants, we want active participants.”