The nation’s most significant program to fund affordable housing has new criteria in Georgia that aim at making units more sustainable and requiring residents to have access to free high-speed internet. 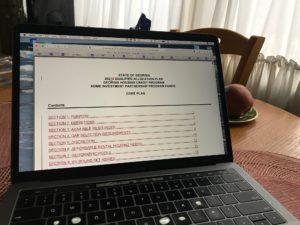 Gov. Brian Kemp approved the new rulebook for Georgia’s program without fanfare and by executive order, on Dec. 28, 2020. The board that oversees the Georgia Housing and Finance Authority had approved the amendments a few weeks earlier, Nov. 18.

The new broadband requirement is both specific and direct. It states, in full:

And the bandwidth may be required have the capacity to serve more than just the residents. If the facility has a community service facility, such as an all-purpose meeting room, the facility is required by another new rule to open its doors to residents of the surrounding neighborhood. This rule applies to facilities built in Census tracts with a level of extreme poverty. The pros and cons of a developer providing this amenity will vary by site.

These are some of the changes to a program that doesn’t tend to get the attention of other types of tax incentives dispensed by entities including Invest Atlanta and the Development Authority of Fulton County.

But since Congress established it in 1986, the low income housing tax credit has become the major driver in the national effort to promote development of housing for individuals earning the salaries of schoolteachers and police officers.

Through the LIHTC, an average of 106,400 units were put into service annually, nationwide, between 1995 and 2018, according to a report by the federal Department of Housing and Urban Development. A total of 3.23 million units were built from 1987 to 2018 with this tax incentive.

Georgia also enacted some changes in sustainability regulations that may seem barely perceptible, but can make a big difference in the quality of life inside a unit.

A new rule adds ceilings to the surfaces that must be painted with a low VOC finish. Previously, only walls and floors had to be treated with low VOC finishes. The rule sets the new limit on ceiling finishes to 50 grams per litre.

VOCs are associated with that “just painted” smell that can linger in a room. Symptoms of health effects from breathing gases emitted by volatile organic compounds include eye and respiratory tract irritation, headaches, dizziness, visual disorders and memory impairment. Some VOCs are known to cause cancer in humans, according to a report by the federal Environmental Protection Agency.

New rules set out terms for building airtightness, a measure that is directly linked to energy consumption and comfort in the building, and for water heaters and plumbing fixtures, with high efficiency plumbing fixtures and fittings required throughout the development.

The entire focus on sustainability has been tightened through requirements to meet standards for sustainable building certifications. A new requirements calls for a “qualified professional to submit evidence” that the project meets all the requirements. The new rule adds teeth by spelling out the requirement that each unit comply with the states minimum standard energy code before the state will release the form the owner needs to get the financial payback from the investment.