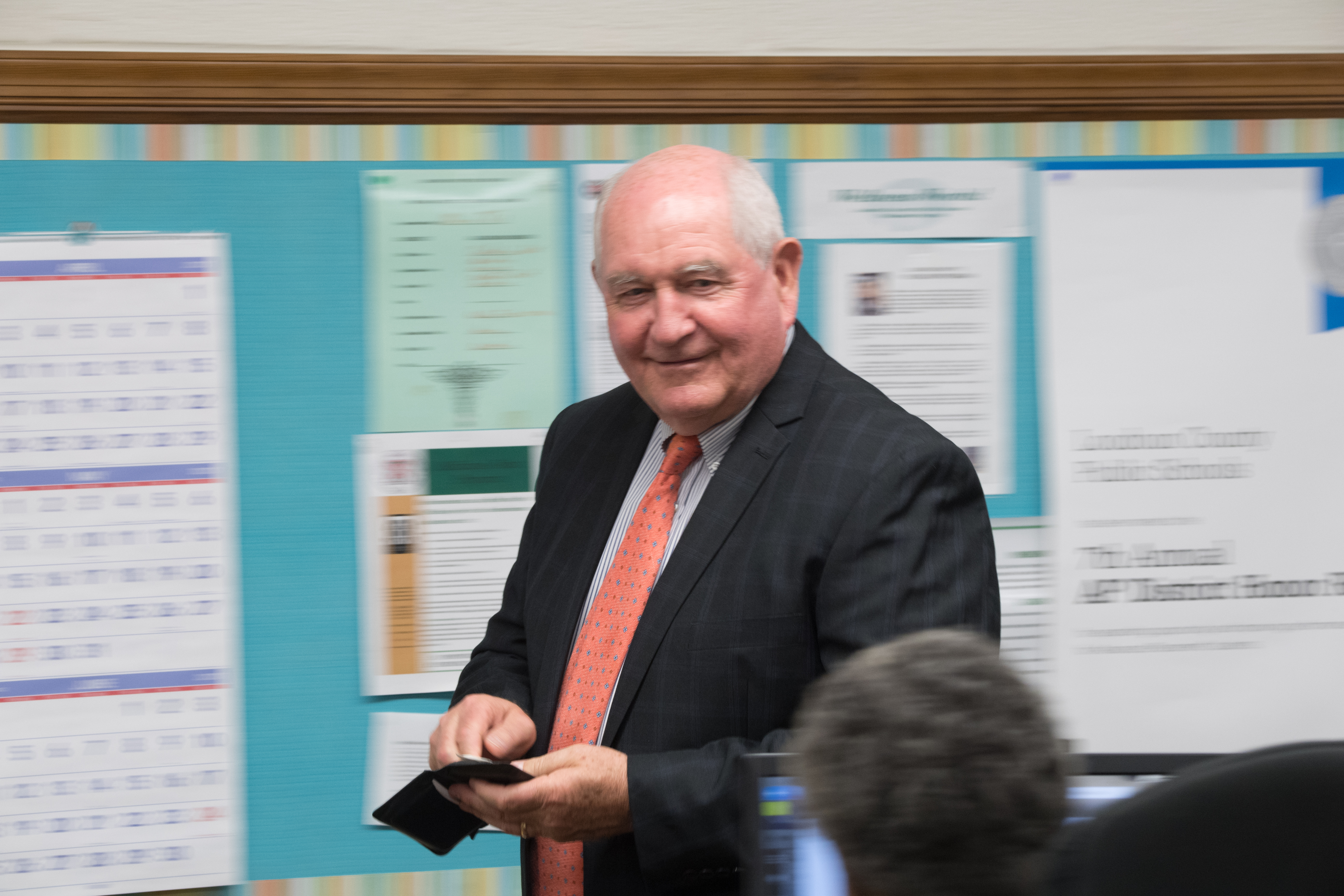 U.S. Secretary of Agriculture Sonny Perdue will speak with six FFA chapters from across the country from C.S. Monroe Technical High School via YouTube Live, in Leesburg, VA, on May 1, 2017.  Please see: https://www.usda.gov/media/live and www.usda.gov FFA is an intracurricular student organization for those interested in agriculture and leadership. For more information, please see www.ffa.org. The Rural Youth Development (RYD) program, funded by the USDA/NIFA, helps students develop leadership skills. The USDA National Institute of Food and Agriculture (NIFA) provides leadership and funding for programs that advance agriculture-related sciences. USDA invests in and supports initiatives that ensure the long-term viability of agriculture. NIFA applies an integrated approach to ensure that groundbreaking discoveries in agriculture-related sciences and technologies reach the people who can put them into practice. USDA Photo by Lance Cheung.

Chances are Sonny Perdue is never going to make the cover of the New Yorker, no matter what he does for Donald Trump.

Agriculture secretaries just don’t get the attention they deserve. A recent cover of the magazine caricatured Mitch McConnell, Lindsey Graham and William Barr shining the president’s shoes. No member of the Trump team has shined those shoes more enthusiastically than the former Georgia governor, nor under tougher circumstances.

From the early days of this administration, Perdue has had his hands full explaining Trump to rural America, and rural America to Trump. As the drumbeat on tariffs has increased, this has become a difficult and multifaceted job.

Last week, perhaps in a signal to his boss, he admitted he was “concerned and anxious” about the threatened tariff on Mexican goods and its potential to upend the new Canada-U.S.-Mexico trade agreement, while arguing in another interview that tariffs aren’t to blame for farmers’ problems. This week, he’s sure to be asked about Trump’s claim, flatly denied by the Mexicans, that Mexico has agreed to immediately begin buying “large quantities” of U.S. farm products.

As the trade dispute with China has deepened, Perdue has also become titular paymaster to American agribusiness, overseeing the billions in farm bailout money which Trump has released. This short-term relief has not made most farmers optimistic.

The Ag Economy Barometer, produced by Perdue University and CME Group, is a monthly nationwide survey of 400 farmers’ views on their business. It’s currently at its lowest point since October 2016, largely due to growing uncertainty that the trade dispute with China is nearing settlement.  Farm country is still hanging with Trump, but Perdue’s job in coming months will be increasingly challenging.

While he’s carried the president’s water on trade, Perdue has also been one of the administration’s leaders in advancing the Trump project of dismantling the federal government as we know it and shutting down sources of inconvenient information. Under Perdue, the Department of Agriculture has shed more than 4,000 employees, more than any other federal department, and eliminated several offices.

A major target has been the Economic Research Service, which issues regular reports and forecasts on a broad range of subjects, from food safety to environmental cleanup costs to food stamps. Sometimes its findings have gotten in the way of political rhetoric, such as when it found that the cost of the food stamp program has actually been declining in recent years.

Congress blocked Perdue when he attempted to defund the ERS last year, but the proposed 2020 budget cuts it in half. Perdue has also announced he’s putting the agency under political leadership and moving the ERS and another agency somewhere out into the heartland, which so far has been narrowed down to Kansas City, the state of Indiana, and — you guessed it — the Research Triangle in North Carolina. Staffers have been leaving in droves for other jobs in Washington, which is probably what the announcement was intended to prompt.

The average consumer may not be aware how much the nation’s producers have come to depend on science fed by a steady stream of research, on every subject from pest control to marketability. The attack on the ERS has drawn a sharp response from agricultural trade groups and past USDA officials, including Gale Buchanan, the retired dean of the University of Georgia school of agriculture.

“I have devoted my career to helping ensure the nation will be fed, nourished, and prosperous. I also worked hard to ensure agricultural research was well administered,” Buchanan, who was the USDA’s chief scientist in the George W. Bush administration, wrote recently.  “I see little in current plans by the Agriculture Department to help our nation in any of these areas. In fact, I see the opposite.”

The zeal to toe the Trump line has even led the USDA to bury its own good news. In April the department released the first comprehensive national study of the school meals program since the changes implemented in the Obama administration. It found that by several measures, the program has been a big success, raising nutritional standards for the nation’s children.

You might say that report has been USS John S. McCained. It was put out without a press release, and disappeared from USDA websites for several days.