A Fulton state lawmaker wants the county’s schools and cities to have some kind of input before economic development authorities abate millions of dollars from the property tax base.

State Rep. Chuck Martin said he’s interested in good developments that want to be part of the community, but he also wants to make sure that the county’s two school systems, and 15 cities  have the money to run education, police, fire and other services.

“That falls on somebody, and if it doesn’t fall on the new folks … then it falls on the current taxpayers,” Martin said at a state House subcommittee hearing Tuesday on his House Bill 837.

He said he’s heard concern from constituents about the Development Authority of Fulton County. That authority’s job is to stimulate economic development — get new jobs, new buildings, and new economic activity that eventually grows the tax base. 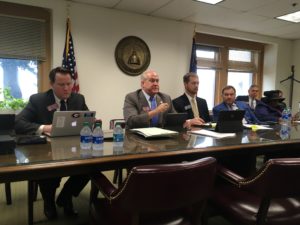 But one of the controversial tools used by DAFC and many counties is property tax discounts.

DAFC has granted property tax discounts to the likes of Phipps Plaza, a BeltLine hotel and a West Paces Ferry luxury apartment building in the last few years. Developers promise various things in exchange, like employing some number of people or adding to the tax base.

In 2019 alone, the Fulton authority gave preliminary or final approval to property tax breaks worth $151 million over 10 years in the city of Atlanta alone, mainly in hot neighborhoods like Downtown, Midtown and the Eastside BeltLine.

Neither Atlanta nor its schools had to approve those abatements, even though both the city and its schools will have to provide more public services as the city grows. That $151 million figure does not include DAFC abatements in other cities like Alpharetta, nor does it include abatements granted in Atlanta by Invest Atlanta.

Martin’s bill has the signature of the House’s second-highest-ranked legislator, Speaker Pro-Tempore Jan Jones, R-Milton. The draft bill would give schools and cities a veto over any property tax abatement. But Martin also said his draft bill will change and he’s inviting all sides to a dialog that will end in some other legislative language.

Al Nash, the chief executive officer of the Fulton development authority, was in the audience at the state Capitol hearing, as was DAFC board Vice Chair Steve Broadbent.

Nash said he looks forward to the dialog on the bill and explaining more about what DAFC does.

“This is a very important tool in the Fulton County toolbox,” Nash said.