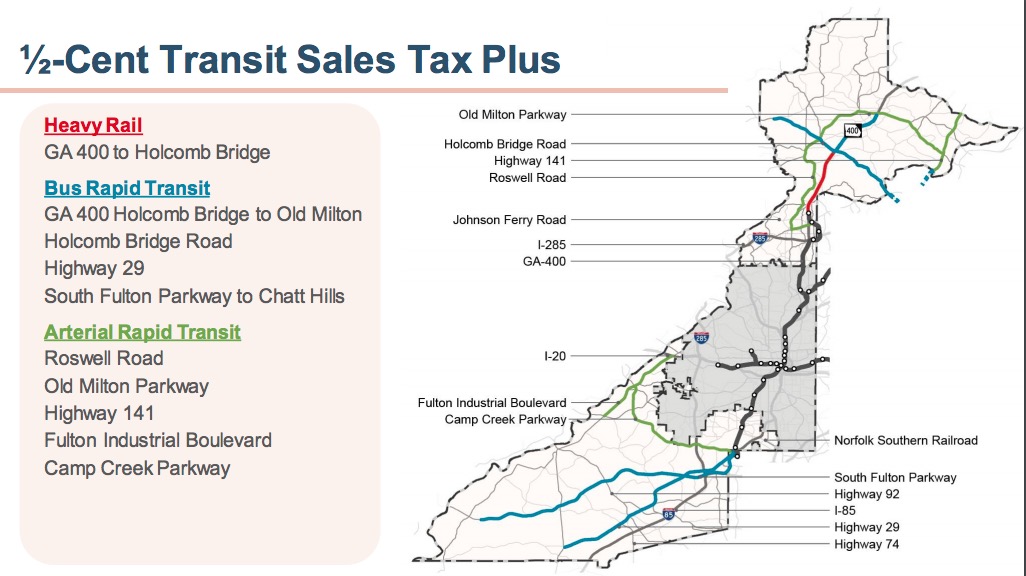 The folks who lead north and south Fulton met Thursday to hear about some scenarios for major transit builds — the first step in a plan that could mean billions in spending over decades meant to relieve traffic and connect people to jobs. 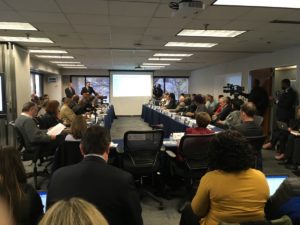 Mayors and county commissioners from Fulton County met at the courthouse Thursday to hear about some possible scenarios for transit builds — if money is forthcoming from the state, a sales tax, or both. Credit: Maggie Lee

Now it’s up to those elected leaders to decide which of several rapid bus infrastructure or rail builds they might want to pitch to the their sales tax-paying constituents and to a state that’s thinking about maybe funding transit.

Some of the ideas: MARTA rail north to Holcomb Bridge, fast buses on South Fulton Parkway and U.S. Highway 29.

The menu of routes and projects comes from the Fulton County Transit Master Plan, a study put together by consultants including Kimley Horn and HNTB. It was presented to a meeting of Fulton County commissioners and to Fulton mayors from north and south of Atlanta on Thursday.

The plans cover only the parts of Fulton that aren’t in Atlanta. So, that’s all the cities from Milton in the north to Chattahoochee Hills in the south. (Atlanta has done a separate sales tax for transit already.) It’s also only about mass transportation — not major new roads or highways.

The county leaders will need to strike a balance between what the public is seeking in mass transportation and the reality that money doesn’t grow on trees.

For example, rail lines are much more expensive than bus routes. But the public may prefer rail.

What’s on paper now is a preliminary master plan recommendation that shows a market-driven vision for what can be built and a number of scenarios based on funding constraints, Eric Bosman with Kimley Horn told county leaders on Thursday morning.

If it were an “aspirational” plan — without constraints — there would be a whole lot more rail, he said.

So what the Fulton leaders saw are a few scenarios of what could be done with a 40-year sales tax of up to a half-cent starting in 2022. If any such taxes get approved by the state Legislature and by voters, local planners would apply for federal matching funds.

Besides that there could be money from the state of Georgia — lawmakers are talking about applying state funding to transit, which it doesn’t regularly do now.

So, here are some highlight slides from the whole presentation:

This “market based scenario” is based on what citizens want and what makes sense in terms of providing transit, said Bosman.

But it’s a drawing that comes before taking budget constraints into account. “It’s what can we feasibly support, that, if money were not constrained, this would be our recommendation for what would be an ideal transit plan moving forward,” Bosman said. 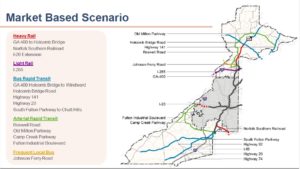 This one shows what might be done if Fulton outside of Atlanta approved a 1/4-penny sales tax for transit. 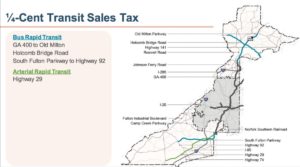 However, the rail is very expensive and would take years to roll out. Outgoing Roswell Mayor Jere Wood said a rail route that starts at Holcomb Bridge Road without buses to feed it might actually mean more local traffic as people try to get to the train.

He said he thinks BRT makes a lot of sense. Besides, he said rail can take so long to build “it might as well be another lifetime.” 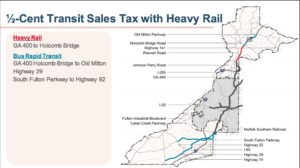 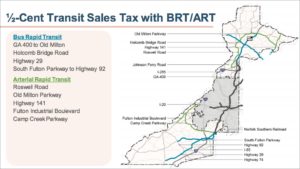 And yet another alternative combo scenario would take more money. That’s the half-cent sales tax “plus” scenario. The “plus” wouldn’t come from a sales tax. It would mean seeking  $2.5 or $3 billion in state or regional money for rail infrastructure. 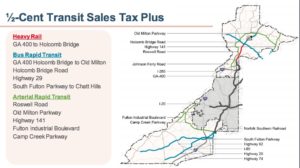 Union City Mayor Vince Williams said that a lot of businesses are looking at south Fulton, and they ask what kind of public transit, light rail is in the area.

“There’s none existent on our side. We’ve got to make sure there’s this equity component,” Williams said.

He said he likes BRT and ART, but also that light rail on the south side needs to be truly embraced. He also told his fellow leaders that if they’re going to be game-changers, it’s worth looking at a transit sales tax in perpetuity, not the 40-year duration that’s on the table now.

“We’re the No. 1 state to do business in. How long will that last if we don’t continue to make sure that we  do a real focused look on public transit and rail systems in all of our areas?” he said.

The county is planning four public meetings to get feedback about the scenarios in January. Two will be in North Fulton, and two in South Fulton, dates and locations will be announced next week.The mayors did not vote formal support of any scenario or tax request. They voted to return to the topic at their next meeting in January, once the public has had a chance to opine.

The timeline is tight for a legislative hearing this year: the annual session begins in January.