Prosecutors don’t spend much time arguing that defendants are not guilty. Nor are there many high-profile defense attorneys who work for the DA’s office.

But both things are happening in Fulton County, where District Attorney Paul Howard has set up a unit to review some convictions for possible exoneration or sentence reduction. Running the unit is Aimee Maxwell, a founder of the Georgia Innocence Project and a onetime president of the Georgia Association of Criminal Defense Lawyers.

In front of some 200 guests at the inauguration of his office’s Conviction Integrity Unit, Howard spoke about the 1960 Atlanta arrest of Dr. Martin Luther King Jr. Police put King in Fulton County’s jail for trying to integrate the Magnolia Room, a restaurant at Rich’s.

No prosecutor ever moved to try and exonerate King, Howard said.

“Those days of prosecutorial neglect, at least here in Fulton County, those days are over,” Howard said.

Most cases won’t involve household names. They’ll involve people who have what the office deems  “credible” claims of innocence, wrongful conviction or constitutional violations. Where feasible, it will also review cases of people who were rightfully convicted, but are serving far longer sentences than they would if they were convicted on the same charges today. 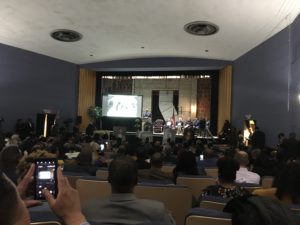 About 200 people filled a theater at Tyler Perry Studios on Wednesday night for a dinner and panel discussion to mark the start of the CIU’s work. Credit: Maggie Lee

Take for example Darrell Hall, who spent 13 years in prison for cocaine with intent to distribute.  Two grams of cocaine, according to Howard, whose office went to court to get Hall’s sentence thrown out. Hall was a guest at the reception, which was hosted in a small theater at Tyler Perry Studios, where Howard also announced Perry is offering Hall a job.

“Sometimes there’s a breakdown and it is possible that an innocent person can be accused of and convicted of a crime that they did not commit,” Maxwell said. “And it’s not what the founders intended all those years ago. And it is not when we as a society should accept today.”

She said studies show that something between 3 and ten percent of people in prison are wrongfully incarcerated. And that even as DNA has made it easier to connect people to a crime, it has also exposed flaws in the system and has exonerated 367 people in the United States.

“If there’s even one innocent person in prison, that’s too many,” Maxwell said.

Howard first announced the CIU in April, 2019 and said that it would review the case of Wayne Williams. Williams was convicted in 1982 of murdering two young men, and police suspected him of being the perpetrator of some 30 homicides from 1979 to 1981 known as the Atlanta Child Murders.

It’ll also review the case of Leo Frank, convicted in 1913 for murder on one man’s testimony and lynched two years later — both actions fueled by anti-Semitism directed at the Atlanta pencil factory manager.

Former U.N. Ambassador and former Atlanta Mayor Andrew Young spoke both about victims of crime he has known — and about one person whom he’s not so sure should have been in prison.

“We must never forget justice, but we must not forget mercy,” Young said.

Howard said the office will also review that case of King’s arrest in 1960.

“I realized somebody might say that that’s only symbolic,” Howard said. “But sometimes symbolism is important.”

Howard also named a five-person review board to assist Maxwell her the staff with reviewing cases. CIU recommendations will then be passed to Howard for any action.

CIU applications must be submitted in writing. For instructions, check out the CIU’s website.