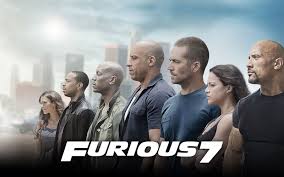 The last thing I expected from “Furious 7” was to be all choked up at the end. Remember, this is the series that sells itself on the dubious acting of Vin Diesel, the factory-stamped hunkiness of the late Paul Walker and, yes, fast cars. Lots of fast cars, preferably crashing at some point without harming anyone inside.

But even someone who’s “Furious” phobic will be moved by the picture’s final scenes which pay tribute to the late Walker who died — terrible irony — in a car crash two years ago.

Pause for full disclosure: I’m not certain I’ve ever sat through an entire “Fast and Furious” film. However, that has more to do with my distaste for Diesel than anything that actually occurred on screen.

Still, this installment makes it easy to feel like you’ve been part of the gang forever, introducing the characters with just the right balance of affection and respect.  At some point, someone says only two things keep a group together over the years — fear or loyalty. And in this case, it’s clearly the latter.

Well, that and some pretty spectacular box office.

Echoing Beowulf, the plot centers on an even nastier villain brought to the fore by the death of a relative. In this case, a brother rather than a mother. (Sorry, couldn’t resist putting Beowulf and Vin Diesel in the same review…)

Apparently, in #6, Diesel, Walker and company (Ludacris, Michelle Rodriguez, and Tyrese Gibson) saved London from a terrorist. That has brought out his incredibly p.o’d brother, played by Jason Statham (snarlingly perfect as a supercilious Brit Baddie).

So, on the one hand, there’s the vengeful brother. On the other, there’s some sort of gadget that can rule the world. Or the Internet. Or Tumblr. Or  Match.com or something.

Anyway, it’s very important this McGuffin not fall into the wrong hands (that would be Djimon Hounsou, channeling Samuel L. Jackson). And the key to keeping it in right hands (in this case, Kurt Russell, bringing a hint of Snake Plissken-grit to an elder statesman role) is the programmer who invented said gizmo.

The picture globe-hops from the Caucasus to Abu Dhabi to, finally, a jerry-built-for-destruction L.A. (in case some of the parking lots seem familiar, part of the movie was shot in Atlanta.)

The movie moves so fast (if not always furiously) that you don’t have time to be bored. And the stunts truly are jaw-dropping. I kept thinking how proud the late Hal Needham — one of the first directors to shoot auto-mayhem in Georgia when he filmed “Smokey and the Bandit” — would be.

Of course, that was a long time ago, in a movie galaxy far, far away. I’m guessing most of this stuff was CGI-style, though there may still have been some stuntman magic involved.

Diesel remains a major negative. The film kicks off with Duane Johnson who’s then sidelined until the finale. But he’s such a better bald-headed tough-guy-with–a-tender-heart that Diesel only looks worse by comparison. The supposed Eternal Romance between him and Rodriguez has so little heat, it may as well have been CGI’d, too.

And then there’s the script. Not just the dialogue, which mostly hands different characters sub-“Die Hard” quips (Diesel gets the lion’s share and does the least with them), but the set-ups for the stunts.

An example: cornered at the edge of a cliff — a huge, huge cliff — Diesel seems doomed. But instead of bothering to figure a way out of this sticky wicket, the script simply sends him hurtling off said cliff (in his car, of course). Great stunt. Lazy writing.

Ultimately, the film seems a lot like a Roger Moore 007 movie, minus — thank you — the junior-high smuttiness. This is definitely not the quote the filmmakers are looking for, but in its own peculiar way, “Furious 7” may be the best family-friendly bet of the year thus far.

If, that is, you don’t mind introducing your children to some of the most amazing vehicular massacres imaginable.  The don’t-try-this-at-home-kids disclaimer comes only at the end of the very long credits.  Should you bring them, be sure to tell the little ones it takes a lot more than just buckling up for safety to survive the sort of fantasy car-nage “Furious 7” hands out. A lot more.