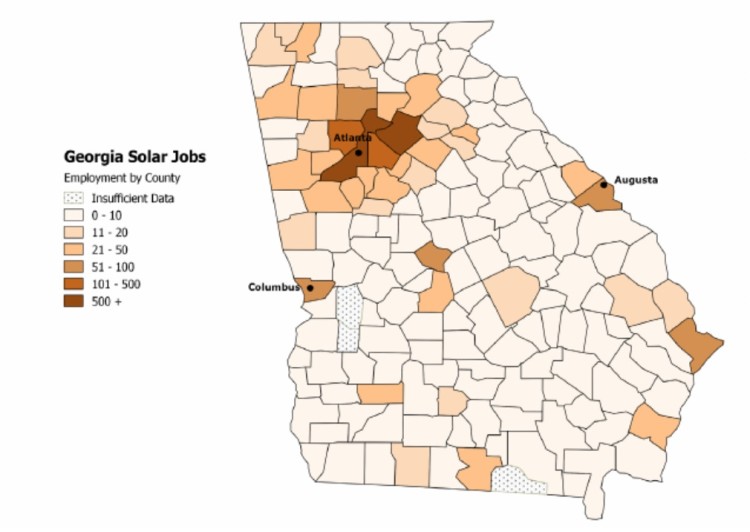 Georgia added 285 solar jobs in 2015 and four of the top 10 counties for those jobs are in metro Atlanta, a new report shows. Credit: 'Solar Job Census 2015'

Editor’s note: This story has been updated with information about the amount of renewable energy Georgia Power proposes in its 20-year plan submitted to the Georgia Public Service Commission.

Georgia added about 285 solar jobs in 2015, moving the state to 15th place in the nation in terms of the number of solar jobs, according to the 2015 jobs census by The Solar Foundation. 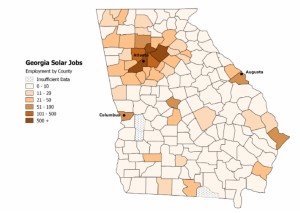 Georgia added 285 solar jobs in 2015 and four of the top 10 counties for those jobs are in metro Atlanta, a new report shows. Credit: ‘Solar Job Census 2015’

Georgia has a total of 3,185 solar jobs, according to the report. That’s an increase of nearly 600 jobs since 2013. The number of jobs is expected to continue to increase, according to Jennette Gaye, executive director of Environment Georgia, which released the report by Solar Foundation.

“Georgia has recently launched the planning process that will determine the type and amount of solar that Georgia Power will support in the next few years so this report comes at an important time and tells an important story– solar is growing, it’s employing real people and it’s here to stay,” Gayer said in the statement.

In addition, Georgia Power filed a docket with the Georgia Public Service Commission on Jan. 29. It regards the status of the solar capacity that’s been procured in the company’s advanced solar initiative.

Kyle Leach, director of Georgia Power’s regulatory affairs, wrote in a letter to the PSC that the company now has 555 megawatts of utility scale solar capacity under power purchase agreements. Georgia Power seeks to procure an additional 100 megawatts and the associated agreements are to be awarded in the first quarter of this year, Leach wrote.

Georgia Power also has submitted its 20-year plan to provide energy. The 2016 Integrated Resource Plan, filed Jan. 29, proposes to provide 525 MW of additional renewable generation to the company’s portfolio. The proposal is pending before the PSC. Georgia Power outlines its solar program on a page on its website.

As a whole, the United States has 208,859 solar jobs, according to the report. Solar jobs exist in every state. 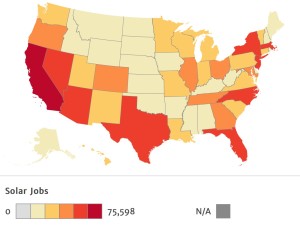 As a state, Georgia has fewer solar jobs than the Denver metropolitan area, which by itself has 3,974 solar jobs. Denver ranks 10th among the top 10 metro areas for solar jobs. 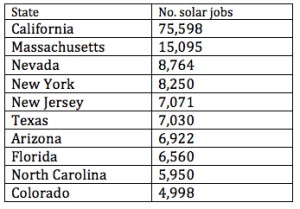 “As today’s census shows, when we place solar on the rooftops of homes, businesses, schools and places of worship, we not only reduce pollution, but also create jobs in communities across Georgia,” Gayer said in a statement. “This census shows that progress toward a 100 percent clean, renewable energy future can go hand in hand with economic progress.”

In November, Atlanta became the first city in the state to establish a solar plan to install solar panels on public buildings, a major move in the city’s efforts to become more sustainable.