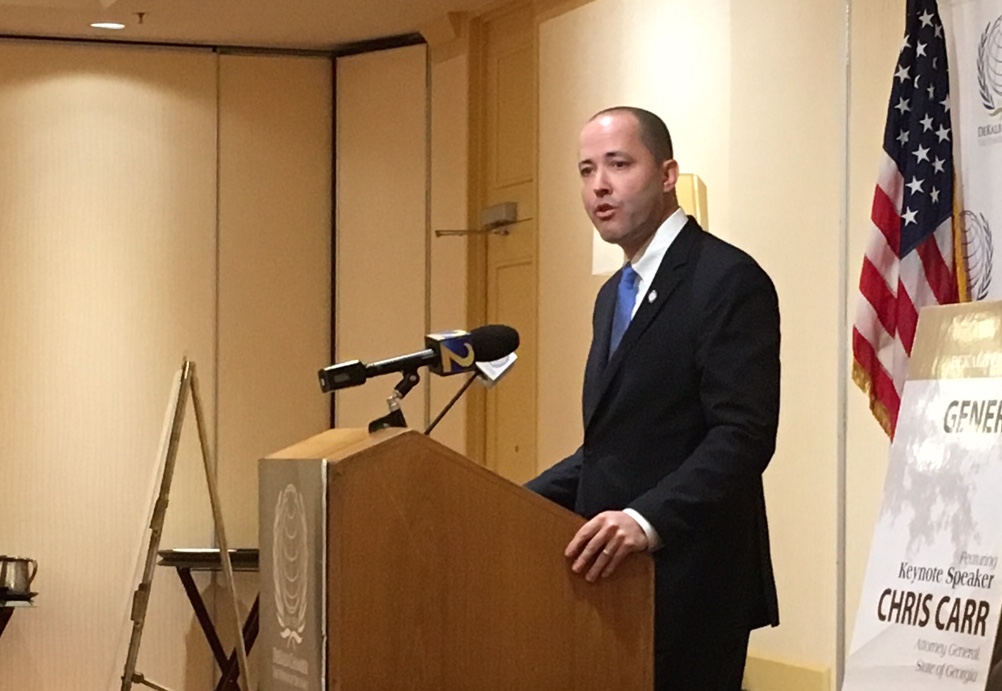 Immigration is a matter for Congress to handle, according to Georgia Attorney General Chris Carr, who spoke at a DeKalb Chamber of Commerce luncheon on Thursday. Credit: Maggie Lee

As some states threaten the federal government with legal action over the immigration status of people brought to the U.S. as children, Georgia’s top official lawyer says that immigration is an issue for the U.S. Congress to settle.

“The issue of immigration is properly handled by Congress, that truly is a federal issue as it relates to the Constitution,” said Georgia Attorney General Chris Carr, during the question-and-answer portion of his keynote address at a DeKalb County Chamber of Commerce luncheon on Thursday. 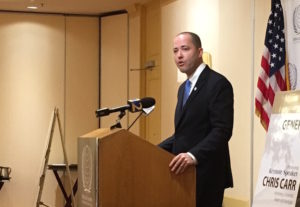 Immigration is a matter for Congress to handle, according to Georgia Attorney General Chris Carr, who spoke at a DeKalb Chamber of Commerce luncheon on Thursday. Credit: Maggie Lee

“Now I would hope that Congress would find a way, particularly when the issue of DACA students come up … I hope that Congress would come up with a reasonable way to deal with folks who, through no choice of their own, have come to the United States and have not run afoul of the law and have gone to college or gone to technical college or gone to the military and have been productive and good members of society,” said Carr.

Several states — not including Georgia — have joined to say they would go to court with their complaints if President Donald Trump doesn’t end the Obama-era Deferred Action for Childhood Arrival program. Under that program, people who were brought to the states as children and have kept a clean record since, can get a work permit and won’t be prioritized for deportation.

And a separate group of states are taking the feds to court to protect DACA.  Georgia is in neither group.

The Trump administration has announced that it would wind down the program, though the president tweeted on Sept. 6 that: “Congress now has 6 months to legalize DACA (something the Obama Administration was unable to do). If they can’t, I will revisit this issue!”

People who have DACA status and their supporters are urging Congress to take some action in the meantime to give so-called “dreamers” a reliable path to legal permanent residency.

Carr’s comment came after a speech in which he detailed his office’s work to the hundred or so guests at the lunch — things like investigating opioid medication marketers and fighting sex trafficking.

But the state does fight some federal policies, which he also mentioned. Georgia has joined other states to dispute proposed federal limits on capping carbon emissions from power plants and on clean water regulations, both of which date from the Obama administration.

Carr, who is a former chief of staff to Republican Sen. Johnny Isakson and a former head of the state’s economic development agency, said that state attorneys general are getting more and more involved in federal issues.

“As Congress gets less and less done, nature abhors a vacuum, and you are seeing the federal executive branch getting more involved with executive orders and regulations,” he said.

He said everybody believes in the principle of federalism — different levels of government have different roles.

“While the federal executive branch has gotten more involved, we have sometimes said, ‘Now wait a minute, you’re outside the lane,'” said Carr.