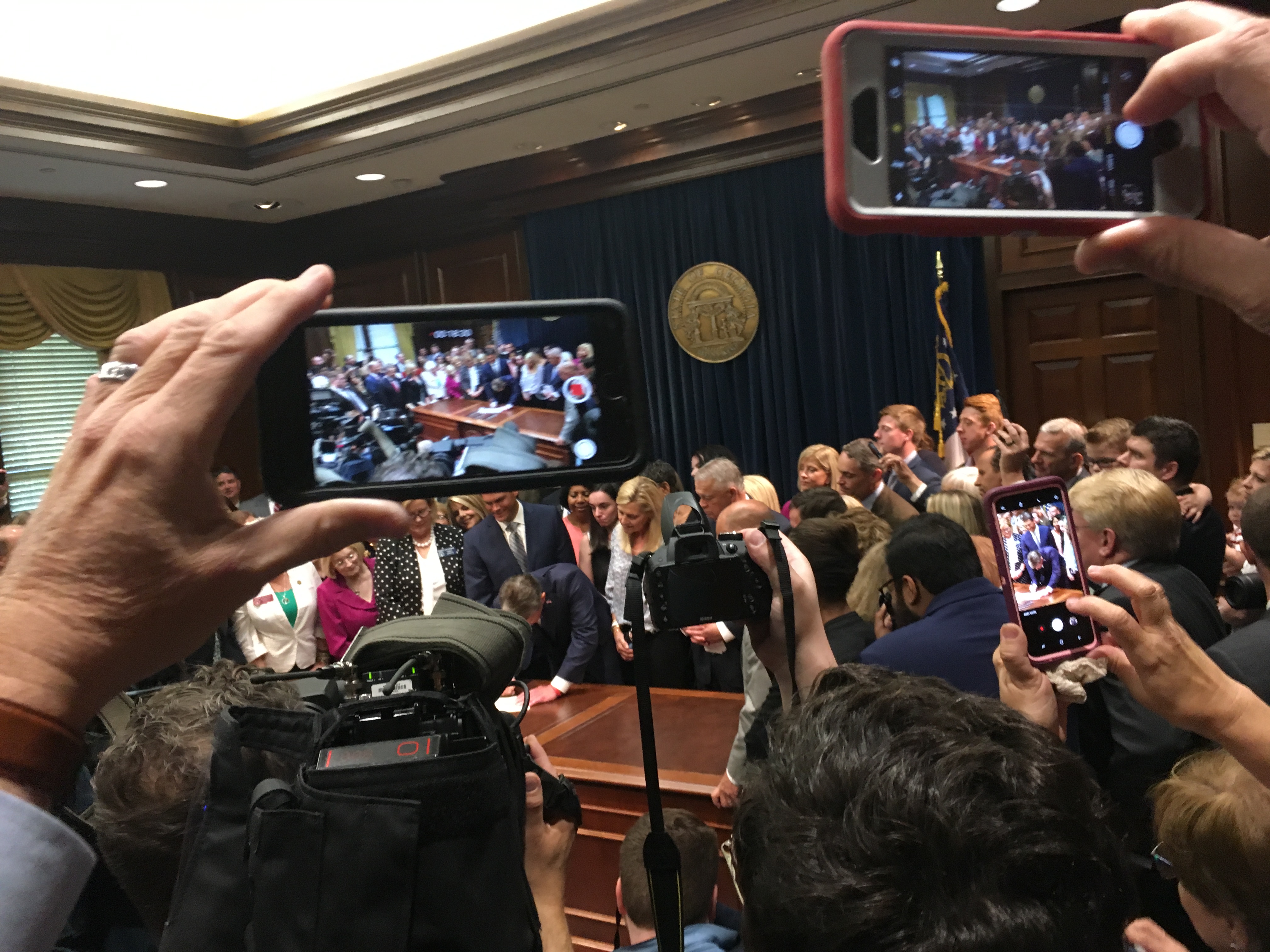 With the signature of Gov. Brian Kemp on Tuesday morning, Georgia joined the list of Republican-led states that have passed new abortion bans in recent years. And it’s about to join a related list, places where there are court challenges to those laws.

And one more: Georgia joins the list of states where abortion will be a political talking point for the next election cycle or two. 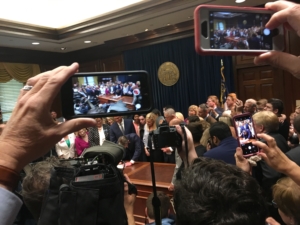 In front of supporters and media, Georgia Gov. Brian Kemp signed a bill he promised to support during his campaign: a near-total ban on abortion after six weeks of pregnancy. Credit: Maggie Lee

“Georgia is a state that values life, it protects the innocent, we champion the vulnerable, we stand up and speak for those who are unable to speak for themselves,” said Kemp, just before signing House Bill 481. With a few exceptions like cases of rape and incest, it bans abortion once fetal “cardiac activity” is detectable. That’s at about six or seven weeks of pregnancy.  It’s called in shorthand the “heartbeat” bill, though the heart is not fully formed at six weeks.

The bill also extends to the embryo at that time what supporters call “personhood.” That entitles the mother to seek child support and the parents to claim a dependent on their Georgia income taxes.

As Kemp signed the bill in his ornate ceremonial Capitol office, in front of press, legislator-supporters and invited guests, opponents gathered just outside on the Capitol steps.

“Setting the prohibition on safe and legal abortion at around six to seven weeks, this is in conflict with the Supreme Court in Roe v. Wade,” Young said. “Just on its face, that provision is in violation of 50 years of Supreme Court precedent.”

She called it a “Frankenstein bill” that includes other problematic provisions.

“This bill narrows the health exception,” Young said — the part of Roe v. Wade that allows abortion if the life of the mother is in jeopardy.

“Mental health and suicide are specifically excluded from the health exception” in 481, she said. 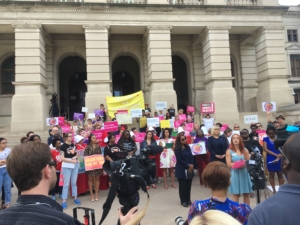 Opponents of House Bill 481 gathered on the Capitol steps on Tuesday as inside, Gov. Brian Kemp signed the near-total ban on abortion. Credit: Maggie Lee

If no court blocks the bill, it would to go into effect in January, 2020. (Right now, current law is unchanged and women can still seek abortions.)

Young said they aim to file the legal challenge by this summer. She expressed every confidence that the ACLU’s challenge would be successful, as have similar challenges to so-called heartbeat bills in other states.

She spoke on Tuesday morning, as did representatives of something like a dozen groups who all want to see the law thrown out.

The objections largely mirrored what came up during the legislative session debate on the bill: That it amounts to a male-dominated political party trying to control women’s bodies and women’s choices, with disregard for the woman’s health thrown in too. In a state that’s acknowledged its problem with a shortage of OB-GYNs, and its high maternal mortality, especially among black women, some argued that the law doesn’t do anything to help fix those problems. On the contrary,  say opponents, the bill amounts to a death sentence for some of the women who wouldn’t be able to afford a trip to a more liberal jurisdiction and would seek illegal and possibly unsafe abortions if the law comes into effect.

Also, it will cost the state some unknown sum to defend the law in court.

Bill supporters say 481 strikes a new — and proper — balance between the life of a mother and the life of the baby developing in her womb. Supporters say the bill amounts to the protection of an innocent and vulnerable life.

State Rep. Ed Setzler, R-Acworth, sponsor of HB 481, said that the bill is scientifically sound, legally sound and “passes the common sense test.” He said it’s different from heartbeat bills that have been struck down in other states.

“In Georgia, we not only recognized that children with a heartbeat are worthy of protection from abortion, but we laid the foundation of personhood,” said Setzler. “We established the full, legal personhood of the child in the womb.”

He said that establishing the legal personhood of the unborn child causes the logic in the Roe case to collapse.

But that will be up to a court. And the litigation could take years.

The bill will also be on the political stage for elections next year and the 2022 gubernatorial election. 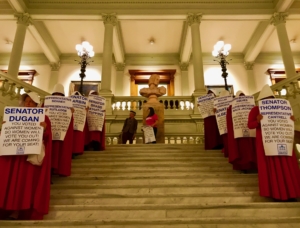 A file photo from March shows what was a common site at Georgia’s Capitol this year: people protesting 481, dressed as women from The Handmaid’s Tale, a book set in a theocratic America that subjugates women completely. Credit: Kelly Jordan

NARAL Pro-Choice Georgia’s Laura Simmons pledged a “six-figure” campaign along with Planned Parenthood Southeast Advocates to “hold legislators accountable” in Georgia and elect a pro-choice majority. (Elections for the whole state House and Senate are next year.) And the AJC reports that the Georgia Life Alliance has launched its own campaign to raise $1 million in support of pro-life candidates.

Teresa Tomlinson, Democratic candidate for U.S. Senate in a 2020 election, sent out a written statement slamming the bill and saying that Republicans don’t trust women.

But on the other hand, for all the campaigners saying they’ll get Republicans booted for supporting 481, there are plenty of Republicans who see it as helpful to their election prospects. Kemp campaigned on promising to sign a bill like 481 and Lt. Gov Geoff Duncan also invoked the rights of the unborn in his campaign.  Meanwhile, Kemp’s campaign has since sent out emails invoking the bill, the latest, just a few hours after he signed it.