Georgia has resumed its offer to Tennessee to take a piece of the Tennessee River in order to resolve a border dispute, but this year’s proposal is far more modest than a plan offered in 2008. 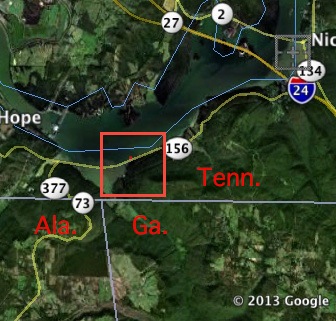 The current proposal appears to seek just a small bite of Tennessee, a smidgeon just big enough to give Georgia a shoreline along the Tennessee River. Just enough shoreline to do provide a footing for, say, a new pipe to be sunk into the river to draw water into Georgia.

The 2008 bid went nowhere. But what’s the harm in pursuing the plan again? The bid to create a city of Sandy Springs was a pipe dream for about three decades – until the community became a city in 2005 and longtime advocate Eva Galambos became mayor.

HR 4 was signed by five lawmakers, whose names appear on the resolution. Each is a House leaders or veteran lawmaker:

The proposal this team endorses would take just a small portion of Tennessee, a piece the state would hardly miss. Georgia’s 2008 proposal was for a significant amount of land – basically extending the northern boundary of Georgia deep into Tennessee – that no one in the Volunteer State could countenance.

Georgia’s present resolution to take the land off Tennessee’s hands is a light read, and of note for its wink of recognition toward a serious issue – water management – that’s received scant attention since Gov. Nathan Deal unveiled a bond proposal that includes money to build resevoirs.

Proposing a settlement of the boundary dispute between the State of Georgia and the State of Tennessee; and for other purposes.

WHEREAS, it is to the public interest and welfare that the boundary between these states be established and proclaimed; and

WHEREAS, if such resolution of the boundary dispute is acceptable to the State of Tennessee, the legislatures of both states shall adopt resolutions agreeing to such proposal and shall submit such resolutions to the United States Congress for approval in accordance with law for establishing state boundaries.

BE IT FURTHER RESOLVED that the Clerk of the House of Representatives is authorized and directed to transmit an appropriate copy of this resolution to Governor Nathan Deal and the Governor and legislature of the State of Tennessee.