Stock image of a medical team. (Photo by Luis Melendez via Unsplash.)

Georgia leaders have united in a quest to land the headquarters of a new federal health-related agency — an effort that would solidify the state’s role as the epicenter for global health.

The administration of President Joe Biden already has allocated $1 billion for the new Advanced Research Projects Agency for Health (ARPA-H) to improve the nation’s ability to speed biomedical and health research on ways to cure cancer, Alzheimer’s disease, diabetes and other afflictions through national and international research partnerships.

The big question is where the agency will be based.

Leaders in metro Atlanta and Georgia understand ARPA-H can be a life-changing opportunity for the state, similar to how Georgia was able to become the headquarters of the Centers for Disease Control and Prevention. 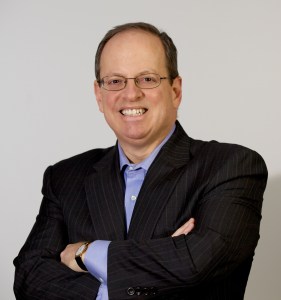 That’s why people have galvanized throughout the state to convince federal officials that Georgia is the ideal location for the new agency.

Dr. Medford, who also chairs the Atlanta-based Center for Global Health Innovation and is CEO of Covanos Inc., said the new agency is being modeled after the Defense Advanced Research Projects Agency (DARPA) as part of the U.S. response to the Soviet Union’s launching of the Sputnik satellite in 1957. DARPA’s accomplishments include precision weapons and stealth technology, automated voice recognition and the Global Positioning System.

As envisioned, the new agency would transform our nation’s health as DARPA has transformed our defense capabilities. 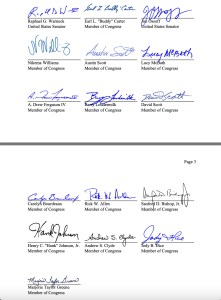 Signatures from Georgia’s 16-member Congressional delegation in support of ARPA-H should be framed, according to Dr. Deborah Brunner.

The quest for ARPA-H has unified Georgia leaders in an unprecedented way. All 16 members of Georgia’s Congressional delegation — led by U.S. Sen. Raphael Warnock (D-Ga.) and U.S. Rep. Buddy Carter (R-Ga.). The letter, dated June 21, to Xavier Becerra, U.S. Secretary of Health and Human Services, made the case for why Georgia should be selected for the new agency.

The fact that every Georgia congressman and U.S. senator signed the letter is remarkable.

“Those signatures need to be framed,” said Dr. Deborah Bruner, Emory University’s senior vice president for research and a member of the Georgia coalition. “That’s such an amazing picture. We truly have unanimous bipartisan support for this project, and all this came together in a matter of weeks.”

Georgia, however, is facing tough competition for the federal agency. From what he’s heard, Medford said other states going after the project include Texas, Massachusetts, California, Ohio and Pennsylvania.

“We believe Georgia is the best candidate,” said Dr. Medford, listing the three major criteria for the agency — medical technology, health equity and global collaboration. “Those are three areas where Georgia excels.” 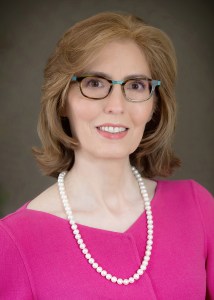 Dr. Bruner pointed to all the Georgia research universities and major health institutions — Emory, Georgia Tech, Augusta University, University of Georgia, Georgia State University, Mercer University, Morehouse School of Medicine and Grady Hospital among others. Georgia also is home to leading bio-medical companies that are part of the state’s ecosystem.

Efforts for greater health equity also are front-and-center in Georgia.

“What truly makes us unique is that we are the center for health equity, not only with race but with urban and rural health,” said Linda Klein, senior managing shareholder at Baker Donelson and a past president of the American Bar Association.

“While other states talk about diversity, we do it,” she said. “There is a network across Georgia working on equity every day.”

The third criterion — global partnerships — is another area where Georgia stands out.

Thanks to the presence of the CDC, Georgia has become a leading center for global health. The local concentration of organizations involved with global health includes the Carter Center, the Task Force for Global Health, CARE, MedShare, MAP International, the CDC Foundation and dozens of other organizations. And thanks to the Georgia Global Health Alliance and the Center for Global Health Innovation, there is growing collaboration on international initiatives. 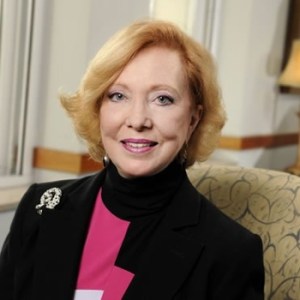 “Having the CDC here works in our favor,” Dr. Medford said. “ARPA-H would complement the CDC, and that proximity makes complete sense.”

David Hartnett, chief economic development officer at the Metro Atlanta Chamber, listed several of the state’s other advantages — the airport, the corporate community such as Atlanta-based UPS and other Fortune 500 companies, and Georgia’s designation as the top state for doing business.

“If ARPA-H is located in Georgia, researchers, companies and others engaged with ARPA-H would have easy travel access via the world’s busiest airport in Hartsfield-Jackson Atlanta International Airport as well as a robust supply chain,” Hartnett wrote in an email.

The Georgia Coalition first convened in early May to talk about going after the project. 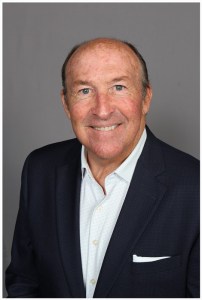 “The coalition came together so rapidly,” Medford said. “The Center for Global Health Innovation was one of the founding organizations for AGC. It was easy for us to pull everyone together under one banner… The response we got on a statewide basis was so enthusiastic.”

State leadership decided to make it a statewide effort without proposing one community over another. “The entire state will benefit no matter where it’s located in Georgia,” Klein explained.

Dr. Bruner said Georgia entities have been working together rather than competing with each other.

“Georgia is a collaborative environment,” she said. “We understand this is a sensitive and political decision, and we understand we have good competition from the standpoint of technology. But when you look at our diversity, our global footprint, our mobility with the airport and the collaborative infrastructure that already exists, we are unique among our competitors.” 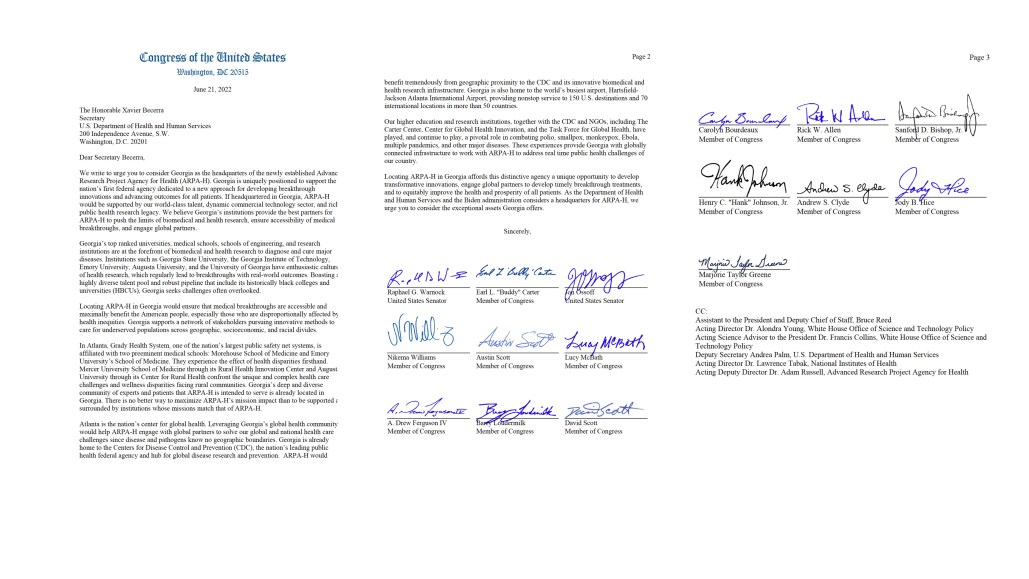 In a rare case of bipartisan unity, the letter has signatures from all 16 imembers of Georgia Congressional delegation supportingf the state’s ARPA-H bid (Special: ARPA-H Georgia Coalition)

Previous Article
Retrospective: Peachtree Road Race July 3rd and 4th, 2021
Next Article
The Supreme Court confounds government’s efforts to deal with the ‘crisis of the day’