Georgia Republican Governor Brian Kemp stood with state legislators from both sides of the aisle Tuesday as he announced legislation to clarify when regular folks can detain each other.

Right now, any Georgian who thinks they see someone committing a state felony can detain that person.

But that “citizen’s arrest” law has dangerous loopholes that could be used to justify vigilantism, Kemp said Tuesday, introducing his legislation.

Kemp’s bill would technically repeal the citizen’s arrest law, except some circumstances where civilians could still detain each other.

Those would include a “shopkeeper’s privilege” to detain suspected shoplifters or folks trying to dine and dash. The bill also carves out a person’s right to self-defense.

“This bill repeals the current Civil War-era statue to prevent the terrible consequences of a vague and outdated law,” Kemp said.

Last year, protesters in the street blasted the citizen’s arrest law because a southeast Georgia prosecutor cited it when he said there was insufficient probable cause to arrest Travis and Gregory McMichael in the February 2020 killing of black jogger Ahmad Arbery near Brunswick. 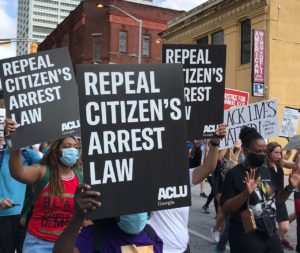 Arbrey “was a victim of vigilante style of violence that has no place in Georgia,” Kemp said.

Arbery’s death is also why why state legislative Democrats, with some Republican support, called for a citizen’s arrest repeal last year and early again in this year’s session via House Bill 45 and Senate Bill 136.

Many Republicans, too, started seeing problems with the law months ago.

“There was general bipartisan agreement that a repeal was appropriate and that we needed to put some fine points int he law to deal with very specific circumstance,” Efstration said on GPB radio Tuesday afternoon.

The “specific circumstances” he has in mind include things like self-defense, defense in the home and detaining shoplifters; that’s what’s in Kemp’s bill.

The state House’s top Republican, Speaker David Ralston of Blue Ridge, and Kemp himself, each said earlier this year that citizen’s arrest “reform” would be a priority.

Technically, the bill will be carried by state Rep. Bert Reeves, R-Marietta, one of Kemp’s official liaisons to the Legislature.  House Bill 479 should be put online and get a committee hearing soon.