Georgia Pacific to sell about $2 billion in unsecured notes, as planned in late 2019

Credit rating analysts expect the hoarding of paper products to slow in the last half of 2020, an with it demand for tissue supplies to reverse. Supplies may be affected by industrial shut-downs, according to a credit rating issued on Georgia Pacific, a major provider of tissue products. Credit: David Pendered 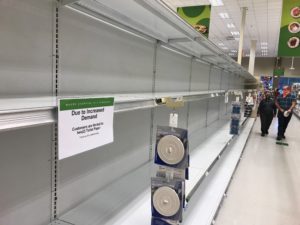 Credit rating analysts expect the hoarding of paper products to slow in the last half of 2020, and with it demand for tissue supplies is expected to reverse. Supplies may be affected by industrial shut-downs, according to a credit rating issued on Georgia Pacific, a major provider of tissue products. Credit: David Pendered

Atlanta-based Georgia Pacific plans to offer about $2 billion in senior unsecured notes and has obtained an investment grade credit rating from Moody’s Investors Service, according to a credit rating action.

The company began taking steps to secure access to cash in late 2019, according to the rating action. The timing of the move coincides with that taken by other corporations that bolstered their cash holdings in preparation for a potential economic downturn in 2020, even before the pandemic emerged.

Moody’s analysts reported GP has about $5.4 billion of liquid resources that can be used to cover $1.25 billion of debt that’s to mature over the next 12 months. This is the scenario for the resources:

GP parent company Koch Industries recently sold $53.9 million in equity, according to a form filed March 11 with the federal Securities and Exchange Commission.

The company does not intend to use the proceeds to fund a merger, acquisition or exchange offer. Nor does Koch intend to the use the money to pay any corporate executives, according to the SEC form. 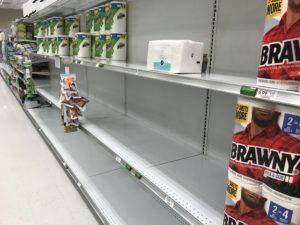 The supply of paper towels appears to be catching up with demand on Saturday at this Publix grocery store. Credit: David Pendered

Koch is not required to release details of the equity sale other than to state the number of investors, which was 20, and to state the minimum investment, which was $1.3 million. This particular SEC form is used to report that a company has raised an unlimited amount of cash from investors who deem themselves as knowledgeable of the risks, or with a net worth in excess of $1 million.

GP’s credit situation is expected to weaken from the issuance of this debt, and from lower returns on building and pulp prices. A return to historic norms is expected in 2021, according to the rating action.

The credit rating action by Moody’s was generally favorable. Analysts rated the notes A3, which is the seventh of 10 investment grade rankings. An A3 rating denotes upper-medium grade and subject to low credit risk, according to Moody’s scale.

The outlook on the notes is stable, as analysts observed: