Georgia signs Toyota to use Brunswick port to ship SUVs built in Kentucky to buyers in Russia, Ukraine

Toyota announced Tuesday a deal that underscores the growing role of Georgia’s ports in the global supply chain. 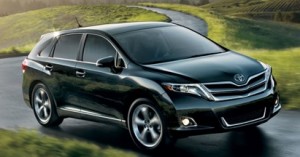 Toyota has signed with the Georgia Ports Authority to use Brunswick in delivering its Venza from a plant in Kentucky to buyers in Russia and Ukraine. Credit: Toyota

Toyota will use the state port in Brunswick to ship its midsize crossover SUV to Russia and Ukraine. The vehicles are assembled in Georgetown, Ky.

Toyota is a new client for the ports authority and it joins Caterpillar in shipping machines through the port. Last year, Caterpillar cited the Brunswick port in its decision to build near Athens a manufacturing plant that is to serve markets in Europe and Latin America.

Toyota expects to ship about 5,000 Venza vehicles through the Brunswick port. Production is slated to begin in April, and the manufacturer’s suggested price in the U.S. starts at $27,850.

The deal with Toyota is especially significant because the company is growing the number of vehicles exported from the U.S. Toyota shipped more than 124,000 vehicles assembled in the U.S. to 21 global markets in 2012, which the GPA reported is an increase of 45 percent over the prior year.

Business at the Brunswick port appears to be rebounding after the recession. The number of machinery units shipped increased more than 20 percent, from 2001 to 2012, according to a statement by the ports authority. The terminal at Colonel’s Island handled 612,489 units in 2012, up from 497,404 in 2011, according to GPA. 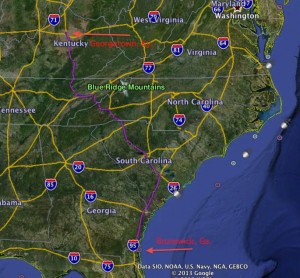 Toyota will ship vehicles from Kentucky to Brunswick, and on to Russia and Ukraine. Credit: Google Earth, David Pendered

Georgia has long emphasized the competitive advantages of its ports – access to I-95, I-16, and railroads – and this deal with Toyota continues that pattern.

“Our facilities provide a transportation hub that is second-to-none in the United States,” GPA board Chairman Robert Jepson said in a statement. “At Georgia’s deepwater ports in Brunswick and Savannah, ocean, road and rail come together to ensure that commerce is handled efficiently, environmentally responsibly and at the lowest cost possible.”

GPA Executive Director Curtis Foltz added: “This new partnership with Toyota highlights the Georgia Ports Authority’s commitment to unparalleled service for automakers. Because of our direct interstate access and two Class I rail services, we can move exports from inland factories more efficiently, as well as move import cargo to destinations across the Southeast.”

The shipments will serve a Toyota plant that employs about 6,600 and represents an investment of $6 billion, according to the GPA statement. The facility is Toyota’s largest manufacturing facility outside of Japan.

“We are proud that Toyota’s U.S. manufacturing operations are continuing to grow as a key supplier of vehicles for global markets, which is only possible thanks to the dedication and high-quality work of our team members here,” said Shigeki Terashi, president and COO of Toyota Motor North America, Inc. “We expect the export of Venza vehicles to Russia and Ukraine will help further solidify our U.S. manufacturing base.”

Georgia continues to invest in its ports, which are generally viewed as a major economic development tool. To further the harbor deepening project in Savannah, Gov. Nathan Deal has included $46 million in bonds in the 2013 budget he presented to lawmakers. The General Assembly is working on the budget.

Previous Article
Trending: I hear people say they don’t read eNewsletters any more, but this past week has proved just the opposite
Next Article
Column: CDC Foundation aids Haiti’s recovery efforts