Georgia voting process looks a little like some states out west — but it might not for long.

Prodded by a pandemic, Georgia’s election board is going to set up a web portal for requesting absentee ballots by mail. And the whole vote-by-mail thing offers a user-friendly alternative to people who don’t want to venture out.

But Georgia’s still far from five states out west, where voters automatically get a ballot and mail is the only way to vote.

A new website for applying for Georgia ballots doesn’t sound like much. But it’s a big change if it doesn’t require a printer, an envelope or a search for a local election office’s contact information.

Right now, the state’s site for requesting an absentee ballot is clunky; it’s basically just an interface that points users toward 159 county election offices. The Georgia Secretary of State’s office publishes a document that you can print and fill out and sign to request an absentee ballot. And it has a separate web page telling where to mail, fax or physically return that request to your county’s election office. You can also email it, if you’re OK dealing with PDF attachments. Some counties put a lot of help online. Others, almost none at all.

If that was a lot to read, that’s just how it is. The answer to a lot of voting questions is “it depends,” or “check with your county.” 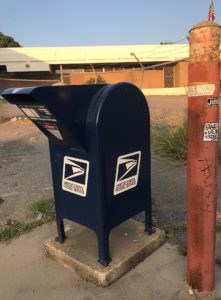 It could be a polling place — though some fear President Donald Trump is trying to undermine the post office and postal voting. (Photo by Kelly Jordan)

The portal “interacts with the state voter registration database, and it requires matching a name, date of birth and driver’s license number, similar to the way our online voter registration works,” Germany said. “And if all that’s done, you can submit your absentee ballot request online … there’s no there’s no signature required.”

But even a ballot request portal is a step back from the ballot access that Georgia’s top election official, Republican Secretary of State Brad Raffensperger, offered in March.

Prompted by COVID-19, his office sent an absentee ballot application to every registered and recent voter in Georgia — about 6.9 million of them.

When Raffensperger made that announcement in March, Democrats applauded the move and asked him to keep it up for all elections.

But right now, there are no such plans for another state mass mailing for November ballot applications.

Also due to the pandemic, Raffensperger has promoted the state’s absentee ballot process, the one done by mail, as none of his predecessors ever has.

No-excuse absentee voting by mail has been legal in Georgia for about 15 years. And yes, it was passed by Republicans. Though the vote-by-mail provision was a small, mainly overlooked part of the 2005 bill that set up voter ID requirements and stirred the fury of Democrats.

But voting by mail has also been overlooked by most Georgia voters too. In recent elections, only about 5% of people have chosen mail-in absentee ballots.

That is, until the June primary, when Georgia and its counties essentially ran two election processes.

About 1.25 million people voted in person, either early or on Election Day, the normal process.

But Georgians also cast about 1.15 million votes by mail — more than anyone had ever seen. (And, as it happens, that’s more mail ballots than Utah voters cast, even though they’re an all vote-by-mail state.)

The November election will be much, much bigger. Raffensperger’s office is looking for about three times the turnout in person and via mail ballots. Though it and county offices have already made much better preparations.

But it’s not clear whether any of these changes — easier ballot applications and mass voting by mail — will stick.

The statewide ballot application portal was only authorized for six months by the state’s election board.

It remains to be seen whether people will still want to vote by mail if an application doesn’t automatically arrive. Maybe COVID-19 has pushed a change in culture. Maybe it hasn’t.

And even if Georgia voting is marginally less complicated this year, elections nationwide are still generally still beset with what The Economist recently called “incompetent administration, weird laws, lack of funding and too few volunteers at polling places.”

In Georgia there were well-documented problems with both mail-in and in-person voting, which you might chalk up to “incompetent administration … lack of funding and too few volunteers.” Like long lines on Election Day, hiccups or bugs with new machines, polling places and poll workers dropping out, ballots lost in the mail.

Oregon, which bills itself as having “the most convenient voting system in the country,” conducts all elections by mail. As do Colorado, Hawaii, Washington and Utah.

Though Oregon doesn’t have a statewide portal where every voter can go request a ballot.

Once an Oregonian is registered to vote, the state automatically mails the ballots.

Clarification: A previous version of this story stated that Raffensperger has promoted vote-by-mail. Since the pandemic, he has indeed promoted use of Georgia’s absentee voting system, which involves using the mail, even “encouraging as many voters as possible to vote by mail.“