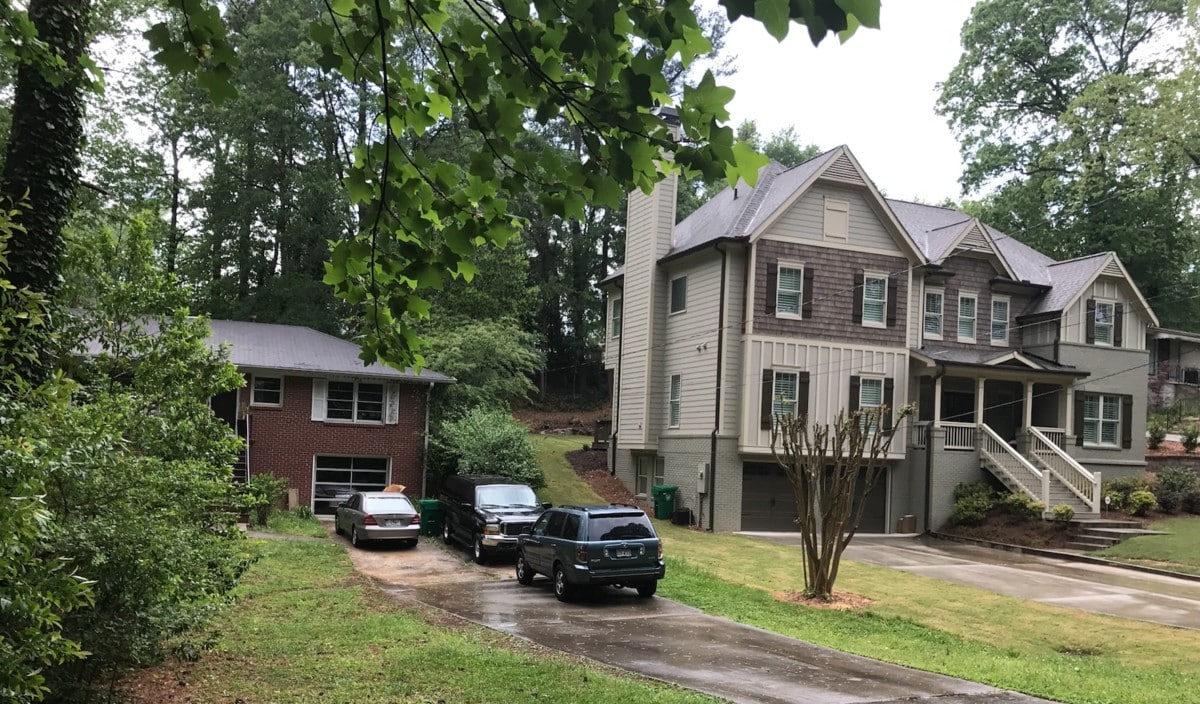 The bottom line of a nuanced report on Georgia’s shrinking middle class is that the divide between the wealthy and low income is becoming ever more stark and could create wide-reaching impacts, according to the authors at Georgia State University. 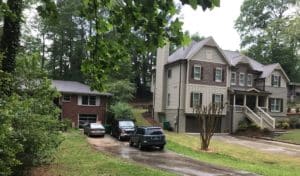 Georgia recorded the nation’s 11th largest decrease in middle- income share between 2000 and 2013, according to GSU’s The Loss of the Middle Class. Georgia dropped from 33rd in 2000 for its share of middle class households to 44th in 2013.

“It’s that decrease in the middle, and the increases in the extremes, that result in less compromise, less agreements, more geographic segregation by income, segregation of political views,” said David Sjoquist, of GSU’s Center for State and Local Finance.

Another concern is the disappearing middle class didn’t leave footprints indicating where they went. Researchers looked at eight potential reasons, such as a loss of well-paid manufacturing jobs, and didn’t find any of the reasons to be significant: 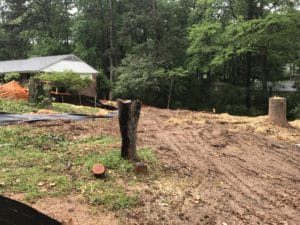 The wooded yard of a razed home in Brookhave has been clear cut of tall pine trees and all other vegetation. Credit: David Pendered

GSU’s report on the hollowing out of Georgia’s middle class confirms 2015 findings by the Pew Charitable Trust. The International Monetary Fund reported in December 2016 that the share of middle class in the U.S. dropped from 58 to 47 percent of the total U.S. household population between 1970 and 2014.

Here’s how the IMF characterized the ramifications of a shrinking middle class:

GSU’s report defines “middle class” in solely economic terms – a household income between 67 percent and 200 percent of the state’s median household incomes. Other factors, such as education levels, are not included. 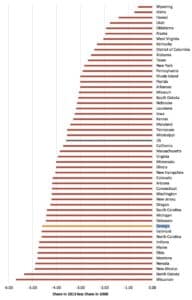 Georgia recorded the nation’s 11th largest decrease in middle- income share between 2000 and 2013. Credit: GSU’s “The Loss of the Middle Class”

The report was produced by Sjoquist; Chandrayee Chatterjee, of GSU’s Experimental Economics Center; and Lakshmi Pandey, of GSU’s Center for State and Local Finace.

The report is nuanced in the sense that its findings can be interpreted in a number of ways.

It would appear to be good news that Georgia moved from 12th in 2000 to 6th in 2013 in its share of high-income households.

Likewise, it would appear to be good news that only a small proportion, 27.3 percent, of the middle class in 2000 had fallen to the low-income category by 2013, according to the report.

These findings would seem to indicate that most middle class households benefited from the economy in the days since the Great Recession.

But then, other factors contradict this conclusion.

Furthermore, Georgia is heading the wrong direction in its rankings for low income and middle class households, according to data in the report.

Georgia ranked 21st in 2000 for its share of low-income households. Georgia climbed to 15th in this category in 2013, according to GSU’s report.

Sjoquist said he and fellow authors could not determine the cause, or causes, of Georgia’s shrinking middle class. The researchers looked for causes including changes in manufacturing jobs, managerial jobs, marriage, age, and so forth. The lack of a conclusion was so troubling the report devotes an entire section to address all the potential factors that were considered.

“We looked at factors to explain the loss and none are significant; we can’t say that they’re that significant,” Sjoquist said. “We tried these and none seem to explain the change in the middle class. Again, this is for a very unique 13-year period. We have the great recession in there. So that is an important factor. And a really, really slow recovery.” 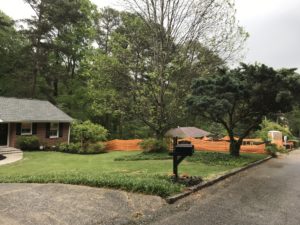 A 1950s-era ranch house was razed and is to be replaced by a new home in a tidy neighborhood in Brookhaven. Credit: David Pendered

Previous Article
Fast-Moving Change and the Scholar-Executive: The Executive Doctorate in Business
Next Article
Atlanta United Football Club and its supporters are serious about Atlanta’s history