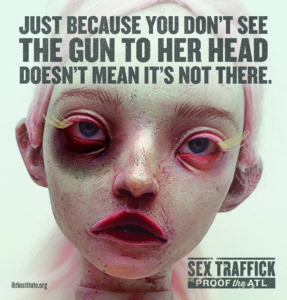 Efforts to halt sex trafficking in metro Atlanta have included a campaign of graphic messages installed on billboards along busy highways by the International Human Trafficking Institute. File/Credit: IHTI

Deborah Richardson heads the IHTI, an initiative of Center for Civil and Human Rights. In an email, Richardson wrote that the toll-free line is a significant step in the battle against human exploitation:

The new toll-free line – 1-866-ENDHTGA – is to serve as a one-stop shop for calls from victims, to provide them information and aid; and from the public, to take reports of sexual or labor exploitation that will be delivered to the appropriate law enforcement agencies.

The toll-free line is part of the state’s escalating battle against human trafficking. Filmmaker Tyler Perry has stepped in, producing in partnership with First Lady Marty Kemp and the GRACE Commission a public service announcement to raise awareness that was released Aug. 27. On Aug. 19, the Georgia Bureau of Investigation announced the formation of a unit to investigate human trafficking. In 2019, the Georgia attorney general established the Human Trafficking Unit, headed by Hannah Palmquist, previously Cobb County’s senior assistant district attorney.

Richardson described ways in which the hotline can aid in the on-the-ground fight against human trafficking: 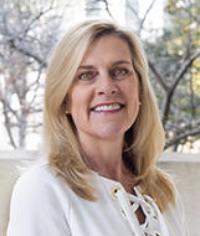 Marty Kemp and Vic Reynolds, director of the Georgia Bureau of Investigation, emphasized in the importance of civic engagement in fighting human trafficking when they announced the establishment of the hotline. Gov. Brian Kemp’s office released a statement Thursday in which Marty Kemp observed:

IHTI presented billboards at 23 locations in 2019 that intended to raise awareness of human trafficking. Credit: Emily Steele via prnewswire.com