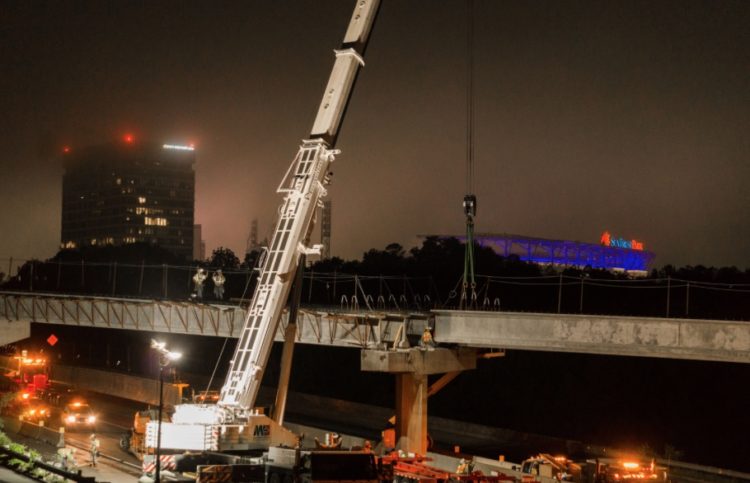 Beams are placed for the Northwest Corridor, at the intersection of I-285 and I-75. Funding for the $834 million project include $266 in GDOT's federal and state program funds. Credit: Chandler Ford, Atkins via dot.ga.gov

This hardly seems a good time for Georgia to update its transportation spending plan, given the drama in Washington. For starters, President Trump is attacking Senate Majority Leader Mitch McConnell, the husband of Transportation Secretary Elaine Chao – who is rumored to be considering resigning her post.

Turmoil at the top always ripples through the ranks. Add in a Congress that’s divided over President Trump’s proposal to cut the federal DOT’s budget by 13 percent in the fiscal year that begins Oct. 1. The result is a herculean task for state planners to divine anticipated federal transportation funding for Georgia.

The lack of progress on federal transportation policy and funding is relevant in Georgia. Federal funds account for about 54 percent of the budget for Georgia’s Department of Transportation, according to a 2014 report by a joint committee of the state House and Senate. The ratio may have changed as a result of the state’s revision in its transportation funding programs.

The board that oversees GDOT is slated in September to approve the 2018-2021 State Transportation Improvement Program, a GDOT spokesperson said Monday. The board is scheduled to receive a draft version at its meeting Thursday in Atlanta. Gov. Nathan Deal and the federal DOT also will be asked to approve the program in September. 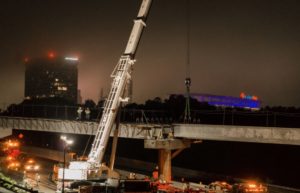 Beams are placed for the Northwest Corridor, at the intersection of I-285 and I-75. Funding for the $834 million project include $266 in GDOT’s federal and state program funds. Credit: Chandler Ford, Atkins via dot.ga.gov

Once these steps are complete, transportation planners are to begin work later this year to develop the 2019-2022 Statewide Transportation Improvement Program.

GDOT planners have already advised the GDOT board that the planning task won’t be easy. A presentation to the board in June observed that the No. 1 challenge in the process is: “Lack of future federal funding certainty.” Challenge No. 2 is: “Matching projects with available federal funding categories.”

Competing views abound on the role of federal funding in state transportation projects. Consider just one: Privatizing air traffic control, which is under the purview of the DOT.

Trump endorsed the concept in a letter sent to Congress in June that outlined his legislative priorities, according to a report by cnbc.com. The president described it, in part, as a cost-saving measure. Chao later told cnbc.com that the privatization move would be a “cornerstone initiative” of Trump’s plan to overhaul the nation’s infrastructure.

The issue erupted into another high-profile imbroglio last week. Retired airline Capt. Chesley Sullenberger ramped up his opposition to the plan. He’s the “Captain Sully” who made the famous emergency landing in the Hudson River in 2009, with no loss of life. A report in thehill.com noted that his opinion has been cited before in congressional discussions of aviation safety issues.

All of which still begs the question of the Trump/Chao relationship.

Evidently, the heated exchanges between Trump and McConnell have raised speculation that Chao may step down from her post.

Chao’s supporters stepped up over the weekend to say Chao’s not likely to resign as a result of the heated exchanges between her husband and President Trump, according to a story posted Sunday on thehill.com.

Meanwhile, Trump’s campaign promises to spur $1 trillion in public and private infrastructure spending have languished. A report from Moody’s Investors Service said Trump’s executive order, issued July 19, has done little to answer questions about how the president proposes to fulfill his vision for a $1 trillion infrastructure package included in the budget request Trump released May 23.

Trump’s proposed budget for the fiscal year that starts Oct. 1 actually heads in the other direction. A 13 percent decrease in funding, a cut of $2.4 billion to $16.2 billion was outlined in a budget blueprint released in March.