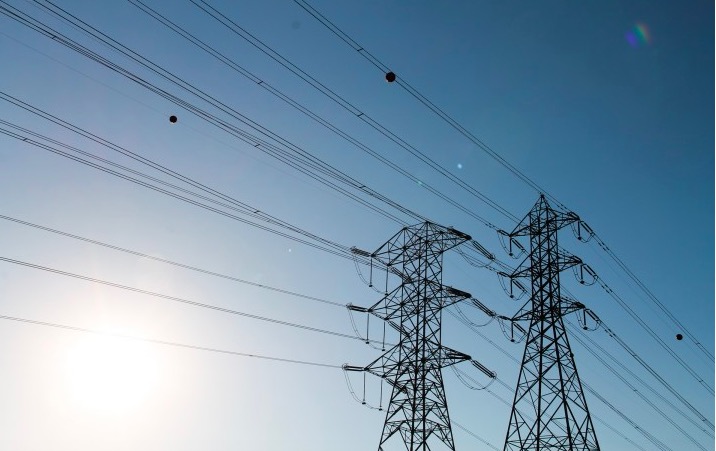 What members of the Public Service Commission do affects your power bill every month and the mix of coal, nuclear and other electricity sources Georgia uses. That’s why environmentalists watch it closely. Now the candidates for the PSC are showing up on primary ballots all over the state — and on Thursday, they faced off in debates.

Republicans and Democrats will both see PSC choices on their primary ballots. The election method is weird: the five PSC commissioners must come from different parts of the state, but they’re all elected statewide. There are two contested races this year.

At debates in Atlanta organized by the Atlanta Press Club, candidates in contested primaries made their pitches to the voters.

They spent probably the most time discussing the construction of two new nuclear reactors at Plant Vogtle, below Augusta on the Savannah River. 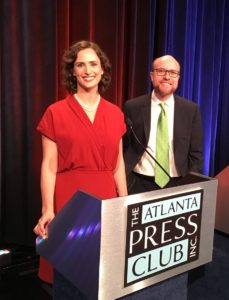 Owned by Georgia Power and smaller utilities, the two new reactors were supposed to have been done by 2016 and 2017, but they’re still not finished and the cost will be about double the original $6.1 billion estimate. The schedule was hit by the bankruptcy of a major contractor; and Georgia Power customers are already paying to finance the builds. Yet a lot of time and money has already been sunk into the project and Georgia Power is shifting away from coal-fired plants. Late last year, the PSC voted to let work on Vogtle continue, despite problems.

Miller and Noel disagreed a bit on how to approach what they both see as a disaster at Vogtle that’s costing regular customers money while power company shareholders make money.

“We need to abandon it now and take our lickins,” said Noel.

He said solar energy has gotten cheaper and that clean and green is more economical. He’s founder of an energy efficiency contracting company — a lot of the work is retrofitting older buildings.

But Miller said it’s very clear that the plant is going forward.

“It’s incredibly important for us, I believe, to now say what can we actually do to protect ratepayers, how are we going to protect consumers, that’s where I want to focus,” said Miller. She’s spent much of her career at Deloitte but is also founder of a company that develops, finances, and maintains solar panels.

Noel’s been an elected official before, he served a term in the state Legislature about 14 years ago. He closed the debate by saying the race will boil down to electability — picking a Democrat who can win versus Eaton. He said he’s the one spent the last year traveling the whole state, Valdosta to Vidalia, campaigning.

Miller said the seat is about a lot of things, like growth, bills, jobs and the environment and access. “Mostly this is a seat about social justice. Are the decisions that we are making bringing everyone up or are we leaving people behind? Are they in special interests or your interests?”

Now on to a race with primaries on both sides of the aisle, for the seat held by Republican Tricia Pridemore.

She’s an incumbent with a short record. In February, Gov. Nathan Deal appointed her to fill a vacancy left by a retiring PSC member. She’s a well-connected co-founder of a software company and former boss of the Governor’s Office of Workforce Development. Also in the GOP primary is John Hitchins, who works in conservation advocacy.

Asked about Vogtle’s cost, she pointed out that in 2017, the PSC voted that the project’s costs were reasonable. 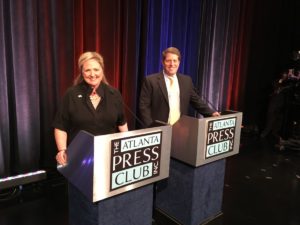 Pridemore said it’s her job as a commissioner to try and have a diversified energy portfolio for the state.

That mix is another big topic the PSC looks at: how much of Georgia’s electricty reasonably should come from coal, natural gas, nuclear energy, solar, wind and biomass.

Pridemore said her job “is pretty simple: Keep rates low, make them as low as possible, make for a reliable system and continue to look at commonsense infrastructure reform.”

Nuclear energy supporters point out that nuclear runs 24-7, and while it’s expensive to build it’s relatively cheap to run.

But Hitchins sounded a tough line on Vogtle. “If I were elected I would make sure they are held very accountable,” he said, to make sure there’s no more going over budget or running late.

Georgia Power did announce a cut this year from April in Vogtle costs on customer bills — about $2.70 less per month per customer.

Hitchins called that “flashing a shiny nickel in our face while they continue to take money out of our back pocket.”

And then there are the Democrats running for a chance to try and unseat Pridemore.

One is Doug Stoner, a former state legislator and the other is Dawn Randolph, a healthcare advocate and nonprofit consultant. Both have also had a variety of clients as Gold Dome lobbyists. 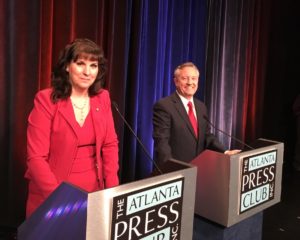 Stoner said his experience as a legislator is an asset. While the PSC is the state’s utility regular, it’s just across the street from Georgia’s state Capitol. Those folks can change your power bill or energy mix too.

For example, state lawmakers allowed Georgia Power to start charging customers before Vogtle came online, on the argument that it would then save money on construction loans. Critics said  early charges on a difficult project was a bad idea. Stoner, back in the legislature in 2009 voted against it, as did many Democrats.

“You’re not going to have a rubber stamp, you’re going to have someone who’s prepared to ask the tough questions” if he wins, said Stoner.

Randolph though, flipped the script on elected office.

“I really want to look at things with fresh eyes … I’ve not been in elected office forever, I bring fresh ideas,” she said.

She lived in Germany, as a self-proclaimed “Army brat,” where they use a lot of solar: “They have less sun than Georgia does; we have incredible capacity for solar … I think that when you have the capacity that we do for solar, that could be incredibly enhanced.”

She’s also looking toward renewables like biomass and even emerging technologies like using reusing cooking oil and algae-to-fuel research.

And on Vogtle? “We’ve got to re-look at this whole thing, we’ve got to look at how Vogtle construction management is really going and question every single thing they do,” Randolph said.

So, if you use electricity and vote, here are the full videos of PSC candidate debates. The primary is May 22 but early voting has already started.