‘Ghostbusters’ an oasis in a Saraha of summer movies 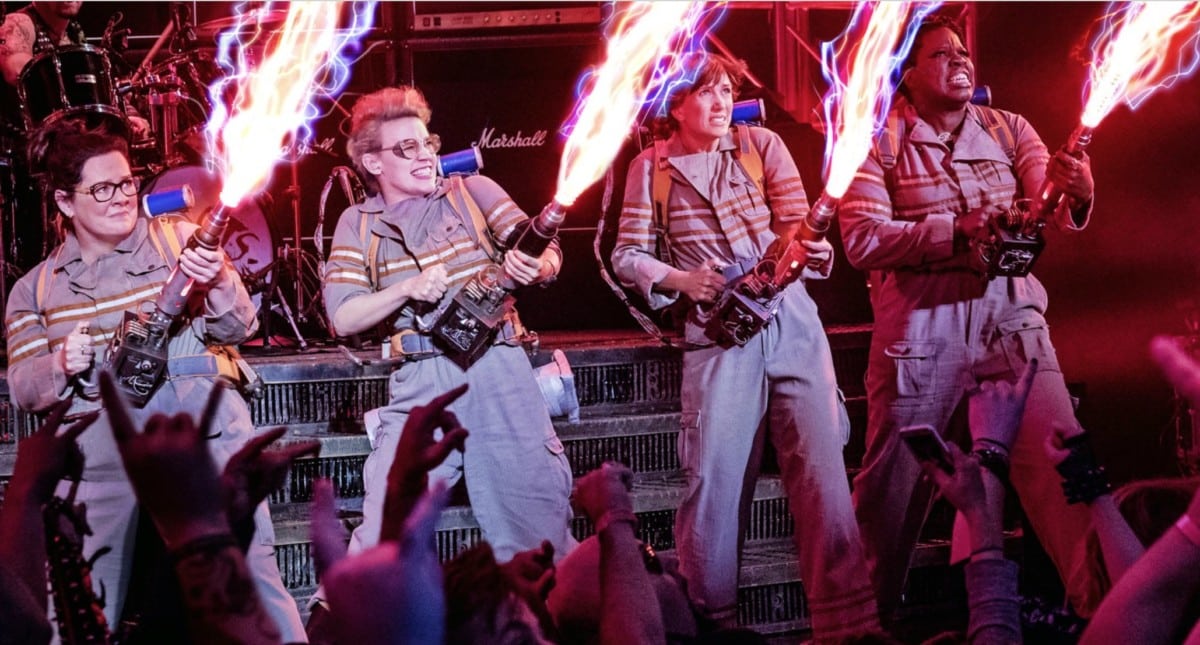 The fearless ghostbusters in the reboot of 'Ghostbusters' are women who unite to save Manhattan from creepy and slimy spooks who are terrifying residents. Credit: gratistodo.com
Share2
Tweet
Share
Pin
Pocket
WhatsApp
Buffer
Email
Reddit
2 Shares

“Why are you pretending to catch ghosts?” asks world-renowned “ghost debunker” Martin Heiss in the new “Ghostbusters.”

Why indeed?  After all, these ghostbusters are – gasp – female, a notion so catastrophic that a zillion trillion Blog Boys have had something akin to a collective meltdown. That Heiss is played by Bill Murray, one of the original ghostbusters back in 1984 (and, again in the so-so sequel), only adds to the “take that, misogynist idiots” joke. 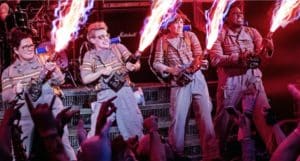 The fearless ghostbusters in the reboot of ‘Ghostbusters’ are women who unite to save Manhattan from creepy and slimy spooks who are terrifying residents. Credit: gratistodo.com

Simply by appearing in the new “Ghostbusters,” Murray is giving his tacit blessing to the new version, as do his former co-stars, Dan Aykroyd and Ernie Hudson (Harold Ramis, alas, is deceased, but the new movie is dedicated to him, a nice touch).

Paul Feig’s reboot doesn’t re-invent the wheel. But it is plenty funny and it goes down easy. And compared to the rest of this summer’s so-called silly stuff (“Neighbors 2” anyone?), it’s an oasis of amusement.

Erin Gilbert (Kristen Wiig) and Abby Yates (Melissa McCarthy) play former best friends who once wrote a book together about the paranormal. However, Erin has since gone “straight” and is currently trying for tenure at Columbia University.

They are brought back together when spooky things start happening all over Manhattan. First, there’s a vengeful apparition in an old mansion. Then something ickily ectoplasmic confronts city employee Patty Tolan (Leslie Jones) in a subway tunnel.  “He’s gonna be the third scariest thing on that train” she observes when the thing hops on a car bound for Queens. 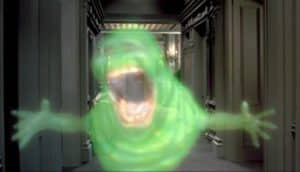 The ghosts in the remake of ‘Ghostbusters’ are as delightful as those in the 1984 original. Credit: screenrant.com

Rounding out the quartet is Abby’s partner, Jillian Holtzmann (Kate McKinnon), a crackpot inventor who’s always coming up with new ways to zap the supernatural to smithereens. That her thingamabobs don’t always work as planned goes without saying, but her enthusiasm and commitment are hilarious.

What ensues doesn’t exactly follow the original, but it’s more or less along the same lines, slime and all.

Andy Garcia is fine as the falsely jovial mayor who just wishes these women would go away and take their spooks with them. Cecily Strong is also good as his ever-loyal assistant who condescendingly dismisses the ghostbusters as “these incredibly sad and lonely women … it’s like they read ‘Eat, Pray, Love’ and ran with it.”

The most surprising performance comes from Chris Hemsworth. The erstwhile Thor is gut-bustingly funny as the himbo the women hire as their secretary. It’s as if he studied Christopher Reeve as Clark Kent and, well, ran with it. It may be the best work he’s ever done. 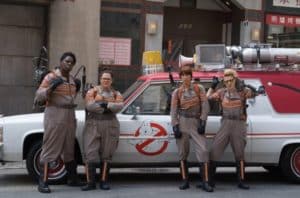 Ecto-1 makes its presence felt in the remake of ‘Ghostbusters,’ as it transports the team with their array of ghost-busting weapons. Credit: lyricis.fr

Still, the movie rests in the hands of its four stars and they work like crazy to bring it all together. Wiig reaffirms her funny/cute persona; Hollywood needs to build more movies around her. Or at least hand her a sitcom as it did for Tina Fey and Amy Poehler.

Newbies McKinnon and Jones acquit themselves well. Jones gets most of the good lines and, as she so often does on “SNL,” she makes each one a slam-dunk. ”I thought this was going to be like a book club,” she says when she first joins the others.

As for McKinnon, well, there’s no telling what she’ll do next – in this movie or her next one. Wire-haired and wild-eyed, she’s like Aykroyd’s techno-nerd as played by Harpo Marx.

The only one who suffers just a tiny bit is McCarthy and I chalk that up to her generosity as a performer. She’s already proved she can carry a movie (“Spy”) and that she can steal one (“Bridesmaids”). “Ghostbusters” doesn’t give her enough opportunities to, well, bust loose – mostly because she’s the one holding it all together.

Did we need a new “Ghostbusters?” Probably not. But we do need more of McCarthy, Wiig, Jones and McKinnon. Together or separately. Either way works for me.