In a city and region with incredibly high wealth disparities and a slim chance for economic mobility, career assistance programs and resource networks are critical. 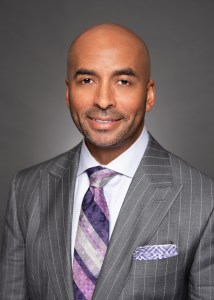 This month, Goodwill of North Georgia President and CEO Keith Parker reached the five-year mark serving in his head leadership role at the organization. He was previously CEO of MARTA, leaving the role in 2017 to join Goodwill.

During his tenure, the local Goodwill enterprise has seen great success. In the last five years, Goodwill of North Georgia has helped around 96,700 folks find employment. For the last consecutive three years, the local Goodwill has been recognized as the top in the nation for connecting people to jobs.

At Goodwill, the mission goes deeper than getting people jobs. The team emphasizes helping residents reach financial independence through the Goodwill ABC approach — first finding a job, then a better job and, finally, a career. 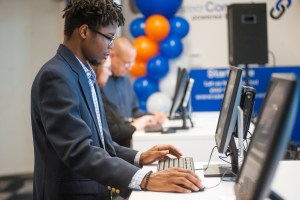 “We will help you find a job and get you all the training you need to be successful,” Parker said. “The only thing we ask is that you come through the door motivated to work.” (Photo courtesy of Goodwill of North Georgia.)

“While we stress that all three [steps] are extremely important, quite often, the most important job a person will have is that entry-level job,” Parker said.

Parker, a man with many high-level positions under his belt, points to his first job as an example.

“My most important job was the minimum wage job I had making slushies at Hanna–Barbera Land in Virginia, making $3.25 an hour,” Parker said. “I learned about customer service, how to work as a team and that the customer in front of you is the most important customer you’ll ever have.”

While entry-level jobs are great stepping stones, Parker doesn’t want folks to stay there. When he joined the Goodwill team, only about 16 percent of job seekers were able to secure a living wage job.

Since then, over 79 percent of job seekers have obtained living wage positions, lifting 36,278 families above the poverty line. This year, the team is on track to help 19,000 more families escape poverty. 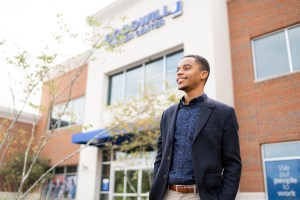 Parker has many stories of inspiring folks who have walked through Goodwill’s doors, like Quandarious Brinkley. Brinkley visited the South DeKalb Goodwill Career Center on a whim as a jobless 18-year-old father in 2010. He was hired as a janitor for Goodwill and with determination and hard work, he secured promotions and access to a network of professionals. Today, Brinkley works in a managerial position for Salesforce. He is completing his master’s degree and intends to pursue a law degree next.

“How many eighteen-year-olds would take a janitorial job seriously? But he did, and we saw something in him,” Parker said. “He’s an example of those folks who have moved up but are part of the Goodwill family forever. There are thousands more stories just like that.”

He continued: “Sometimes you get lost in the numbers, but you always remember the stories.”

With momentum from the organization’s recent successes, Parker looks to the horizon and sees room for improvement. At the forefront of his mind is serving those who are most vulnerable and face the greatest barriers to employment, including residents with disabilities, veterans, formerly incarcerated individuals, women and people of color.

In addition to the Career Centers, the Goodwill team is also focused on expanding the reach of its retail stores, which fund the nonprofit’s career services. With 69 stores and 50 donation centers, Goodwill has a larger retail footprint in Georgia than Target.

“It’s a fully-fledged ecosystem,” Parker said. “Shoppers and donors are the fuel for us to help people find the jobs of their dreams.”