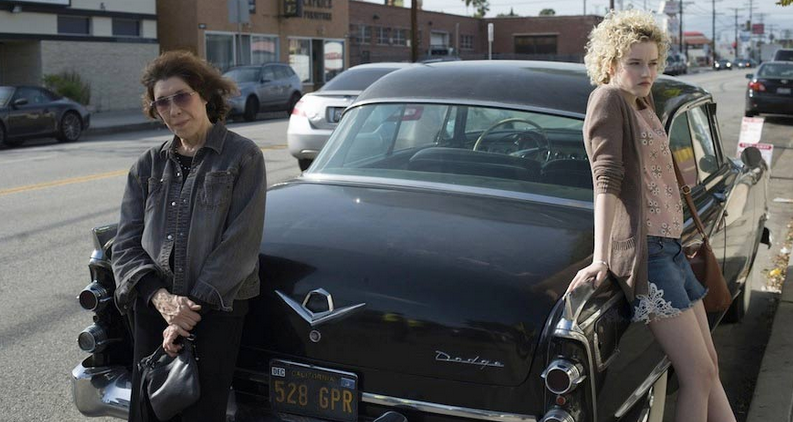 I’d sit through just about anything to spend time with Lily Tomlin.

Happily, “Grandma” is considerably better than just anything.

At a mere 80 minutes, Paul Weitz’s character-driven comedy may be slight, but it offers plenty of insight and humor. And, more importantly, as whole lotta Lily. 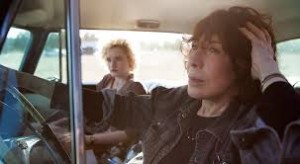 She plays Elle, a one-time fairly famous poet — “marginally well-known” is how she puts it. However, as she herself ruefully notes, she’s spent most of her life as a “writer-in-residence.”

When we first meet Elle, she’s in the middle of a break-up. Having spent 38 years with the now-deceased partner who was the love of her life, she dismisses Olivia (Judy Greer), her girlfriend of four months, as “a footnote.”

No sooner is Olivia out the door, than a cute teenager with a halo of Harpo-esque curls turns up.  She’s Sage (Julia Garner), Elle’s granddaughter. And she’s pregnant. And she needs $630 for an abortion.

Elle’s response isn’t a judgmental “who’s the father,” but a thoughtful bit of advice. Yes, an abortion is legal (for decades…). And yes, it’s Sage’s decision. Still, no one should equate an abortion with, say, having a root canal. 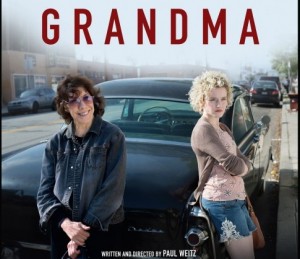 “This will be something you’ll think about every day for the rest of your life,” she tells Sage.

However, “Grandma” isn’t a debate over abortion. Rather, it’s a “day in the life” odyssey during which these two will argue, bond and encounter an assortment of people from Elle’s past.

Having cut up her credit cards and turned them into a sort of wind chime, Elle doesn’t have the money. So the two set out to find it. Asking Sage’s mom (Marcia Gay Harden) isn’t an option. The sort of driven woman with one of those treadmill-desks in her office, she’s a formidable and, to Sage, unforgiving presence. As for Elle acting as a go-between, well, no dice; mother and daughter have been estranged for years.

Driving around in Elle’s classic Pontiac, she and Sage hopscotch through a variety of people and places. Stops range from a feminist café run by an old pal to the beautiful home of an exquisitely aged hippie (an exquisitely aged Sam Elliott) with unexpected ties to Elle. 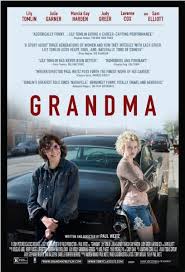 The funniest encounter is with Sage’s reprehensible brat of a (former) boyfriend (Nat Wolff), i.e., the sperm donor. Not only does he feel no responsibility for Sage’s situation (or, worse, any interest), but he mouths off to Elle. Not a good idea. As she explains, she doesn’t have anger issues; she has a**hole issues.

Probably one reason “Grandma” is so bluntly titled is that Weitz has a lot of fun with multi-generation gaps – and gaffes. When Elle mentions “The Feminine Mystique,” Sage has no idea what she’s talking about. Unless, maybe, she means Mystique from the X-Men.

Still, what’s important here is the shared journey. Elle and Sage are connected by blood but separated by a culture that has gone through massive changes in the past several decades. Why they need to find the money doesn’t matter. It’s more like Hitchcock’s McGuffin. Sage could just as easily owe the Mafia.

Most of all, “Grandma” is an exquisite showcase for Tomlin who’s never fit anyone’s mold, yet has somehow managed to stay a constant in our pop-culture consciousness ever since she became a breakout star on  “Rowan and Martin’s Laugh-In.” (Now, there’s an example of something that’s aged badly – not that it was very good to begin with…).

Like its star, “Grandma” is bright yet occasionally bruising, wryly acerbic yet open-hearted, laugh-out-loud funny but relentlessly human.

However, unlike the outspoken Tomlin who stood up for certain issues back when it took real guts to do so, the picture’s not especially political. Same-sex partners and difficult life decisions aren’t the Big Deals here; how we handle each other is what matters.