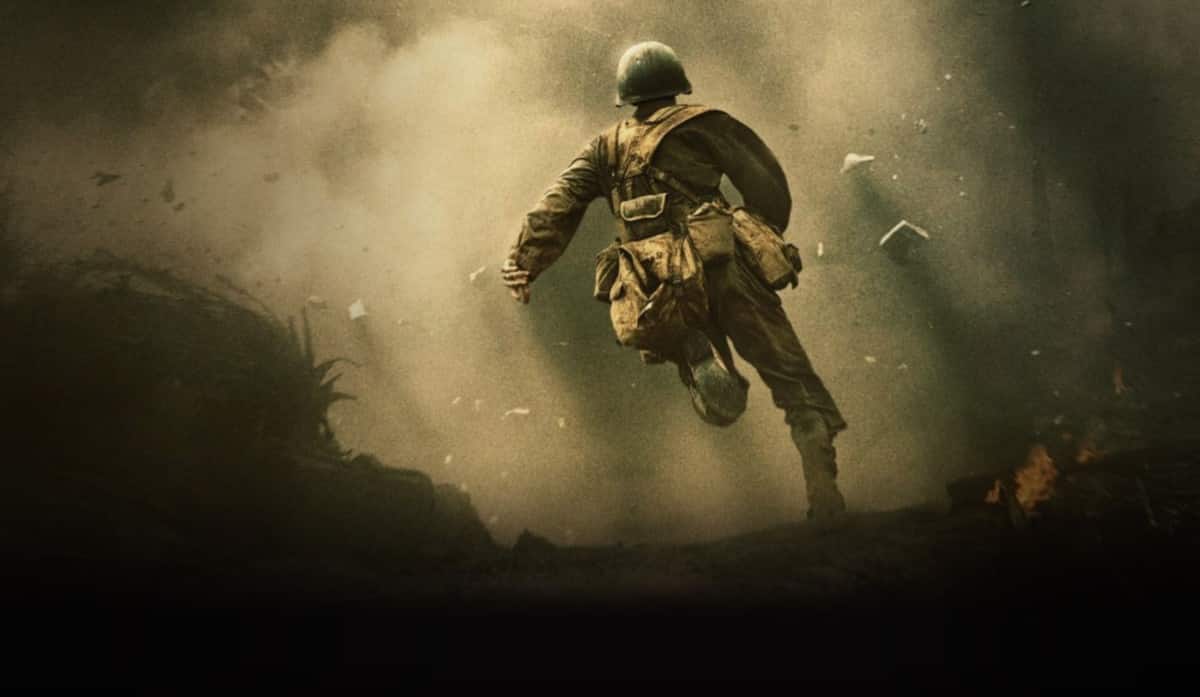 “Hacksaw Ridge” lets us know what we’re in for with its opening shot: a montage of soldiers in flames, caught in a slo-mo inferno.

Then it’s back stateside – rural Virginia where Desmond Doss lives with his brother, his beaten-down mom (Rachel Griffiths) and his dad (Hugo Weaving), a raging alcoholic who does the beating. His constant fury is an unwelcome residual of his service in World War I. 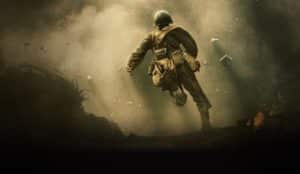 ‘Hacksaw Ridge’ portrays the true account of a Virginian who served as a medic in World War II and whose actions were recognized with a Medal of Honor. Credit: cwtheaters.com

Now World War II is in full swing. The grown-up Doss (Andrew Garfield) is a gangly guy with an infectious village-idiot grin and a fervent belief in the word of God. He also has an eye for pretty girls – especially a prettier-than-pretty nurse (Teresa Palmer) whom he intends to marry.

But first, he must serve his country. Doss sees himself as a conscientious cooperator rather than a conscientious objector. He will not touch a gun, but that doesn’t negate his feelings about his duty. He can’t sit safely at home while others fight and die.

As you might guess, his no-guns-thank-you attitude does not sit well with the military. His immediate superiors, an overbearing drill sergeant (Vince Vaughn, a risky casting choice that doesn’t work) and a self-serving captain (Sam Worthington, doing fine) want him court-martialed The rest of the regiment – who have picturesque names like Vitto, Lucky and Hollywood – would just as soon beat him to a pulp.

But as they – and we – soon learn, Doss doesn’t give up easily. In fact, he doesn’t give up, period. He’s with the guys when everyone’s shipped off to the Pacific and the deadly killing field known as Okinawa. They are there to take lives; he is there, as a medic, to save lives.

It’s in the heat of battle that “Hacksaw Ridge” kicks into full gear. Mel Gibson – oh, did I forget to mention he’s the director, returned from the wilderness after being virtually blacklisted in Hollywood – is a poet of blood, guts and gore. We’ve seen his gift for bloodletting in movies like the Oscar-winning “Braveheart” and “Apocalypto.” Doss’s incredible, true story – courage under fire like you’ve rarely seen – gives Gibson a strong framework on which to hang his yen for rat-infested corpses and severed body parts. 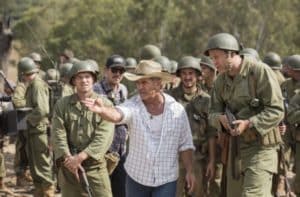 ‘Hacksaw Ridge’ is Mel Gibson’s first directing job since 2006 and may be his mea culpa for his past behavior. Credit: thenewdaily.com.au

But here’s the important thing: Doss actually did what we see him do in the movie. I’m not telling how, but he single-handedly rescues 75 men after Japanese force the Americans to retreat.

“Hacksaw Ridge” is visceral and vicious.  It rubs our faces in the hell of war even as it hints at some of the insane exhilaration that accompanies it. This is the sort of film in which your Hollywood close-up is likely followed by a bullet in the head or a grenade that blows your face off. And in the midst of it all, there’s Doss, being the hero that earned him a Medal of Honor.

Garfield is something of a revelation here. Having failed to catch on in big-profile pictures like “The Amazing Spider-Man” and “The Social Network,” he creates a persuasive and unusual protagonist – part Gomer Pyle, part Sgt. York (another pacifist hero enshrined by Hollywood).

Like the director’s earlier piece, “The Passion of the Christ,” “Hacksaw Ridge” is relentless. Gibson still doesn’t understand pacing, but boy, does he get the sheer kinetic power of film.  It’s as if the excesses that make him problematical off camera give him a kind of deranged genius behind it.

“Hacksaw Ridge” isn’t a great movie, but it’s a very solid and satisfying one. And you have to wonder if Mad Mel isn’t handing us his own odd mea culpa.  One of the most admirable figures in the film is a medic named Irv Schecter. Gibson can’t erase his alcohol-fueled nastiness of a decade ago, but he can try to make amends.