Georgia House Bill 426 started as a near-copy of a law most states already have: extra penalties for crimes motivated by hatred of the victim’s race, religion, gender or so on. More than a year later, and after nationwide street protests against police brutality, a state Senate committee heard the bill and proposed adding police to the list of those so protected.

And just a few days after that, another state Senate committee backed down and removed all references to first responders from the bill.

Which means the Georgia Legislature could be close to passing a hate crimes bill by the time the annual legislative session ends Friday.

“We think this is something that’s good for Georgia,” said state Sen. Bill Cowsert, R-Athens, presenting the state Senate’s latest take to its Rules Committee on Monday night.

The Senate’s version would apply extra penalties to all felonies motivated by hate, and the penalties could include more than two years in prison.

The Senate version doesn’t include most misdemeanors — even though some of those, like aggressive driving, shoplifting or vandalism — are more common, if less dramatic and dangerous, than felonies.

But the House-Senate difference is small compared to what came before. Indeed, the Georgia NAACP was tweeting its support before the Monday night committee meeting even finished.

If the traditional, commonplace hate crimes bill as first written doesn’t pass, “it really will be an embarrassment to this state,” said state House Rules Committee Chairman Richard Smith, R-Columbus, last week, when this pot got to boiling.

He’s pretty much second in power only to House Speaker David Ralston, R-Blue Ridge, who has for months used every chance he has to call for the passage of House Bill 426 as first written. 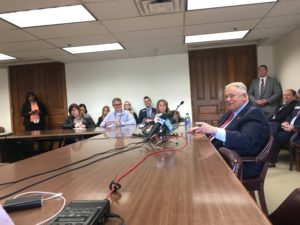 Cowsert, the Athens senator who would later present the bill dropping police from hate crimes legislation, said on Friday that police need protection for several reasons. For one, he said Atlanta police are walking off the job because they are not appreciated.

(Atlanta police acknowledged a higher-than-usual number of officers calling in sick one night after DA Paul Howard announced a murder charge against an officer in the shooting of Rayshard Brooks. The police said they had enough resources to maintain operations. The private nonprofit Atlanta Police Foundation gave every officer a $500 bonus.) 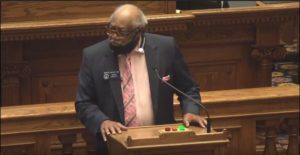 (Most people in the Georgia Legislature don’t know what that’s like, by the way.)

The full Senate is scheduled to hear its version of the hate crimes bill Tuesday.