Easily a candidate for dozens of Best of 2016 lists, “Hell or High Water” is one of those rare movies that feels exactly right from the get-go.

Five minutes in, you know you’re in good hands – that this picture is going to take care of you and take you along, almost effortlessly.  It makes you realize how disappointingly thin most of the year’s movies have been.

Jeff Bridges (left) and Gil Birmingham dine in a place so haggard the waitress, Margaret Bowman, asks: ‘What don’t you want?’ Credit: forbes.com

Tanner and Toby Howard (Ben Foster and Chris Pine) are brothers on a bank-robbing spree in the dusty nothingness that is West Texas. Tanner, the eldest, is an ex-con and a hothead. Toby is pretty much a law-abiding citizen. But as we soon learn, he’s the one that needs the money. For a good cause, of course: He’s trying to provide a secure future for his two young sons. It’s more complicated than that, but that’s pretty much all you need to know.
Not exactly hot on their trail (yet) are a pair of Texas Rangers: Marcus Hamilton (Jeff Bridges), an irascible old coot with retirement breathing down his neck, and Alberto Parker (Gil Birmingham), a stand-up guy, half Mexican, half Native American. He’s often the stoic target of his partner’s wheezy ethnic insults, but when he feels like it, he can give as good as he gets. . “You wanna’ to hear about these bank robbers or you just wanna’ sit there and let the Alzheimer’s take its course?” he asks when Marcus goes off on another rant.

Meanwhile, back to the brothers…

Mostly, they’re good guys, in the Jesse James/Bonnie and Clyde mode of bank robbing. They arrive early, just as the bank opens, so there’re no customers who could get hurt. They only take small bills, i.e., nobody’s life savings. And, aside from the occasional pistol whipping, they don’t hurt anyone. 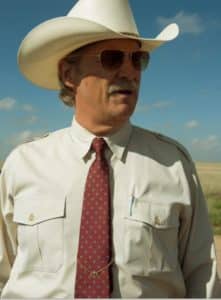 Jeff Bridges’ performance as an aging lawman is so strong he turned a supporting role into the film’s emotional core. Credit: blackfilm.com

In fact, they’re doing what a lot of the locals wish they could do: get back at the hated banks. One potential witness, when asked to describe what he saw, says he looked, “long enough to watch a bank get robbed that’s been robbing me for 30 years.”

Still, you sense there will be blood. And soon enough, there is.

Taylor Sheridan’s brilliant screenplay is essentially about the relationships between these two vastly different sets of men.  The give-and-take of trust and distrust is artfully drawn, as is a kind of womb-to-tomb loyalty.

The barren West Texas landscape is almost a character itself. Hard times have hit and they don’t seem to be going away anytime soon.  Everywhere you look there are “For Sale” signs or billboards that read “Got Debt?” Even the gas stations have shut down.

It’s as if we’ve somehow wandered into a desolate post-apocalyptic corner of the country where bush fires inexplicably rage and a scraggly (and scrappy) waitress asks her customers, “What don’t you want?”

The picture is full of moments like that – funny and weird, yet somehow telling.  Happily, the stars know they’ve been handed something special. Pine proves there’s a lot more to him than those blazing baby blues. Foster shimmers with volatile unpredictability. Birmingham pulls off the harder-than-it-looks trick of making a good man interesting.

And Bridges? Well, Bridges does it all – and more. He’s funny, annoying, smarter than he seems and, ultimately, cold-blooded. Simply put, he turns a supporting role into the film’s emotional core.

“Hell or High Water “ sometimes calls to mind “Bonnie and Clyde.” Or any number of movies about Jesse and Frank James.  You could even grant it a touch of  “No Country for Old Men” – except it’s much, much better. In other words, the Coen Brothers, at their very best, could’ve made this movie.

And they probably wish they had.