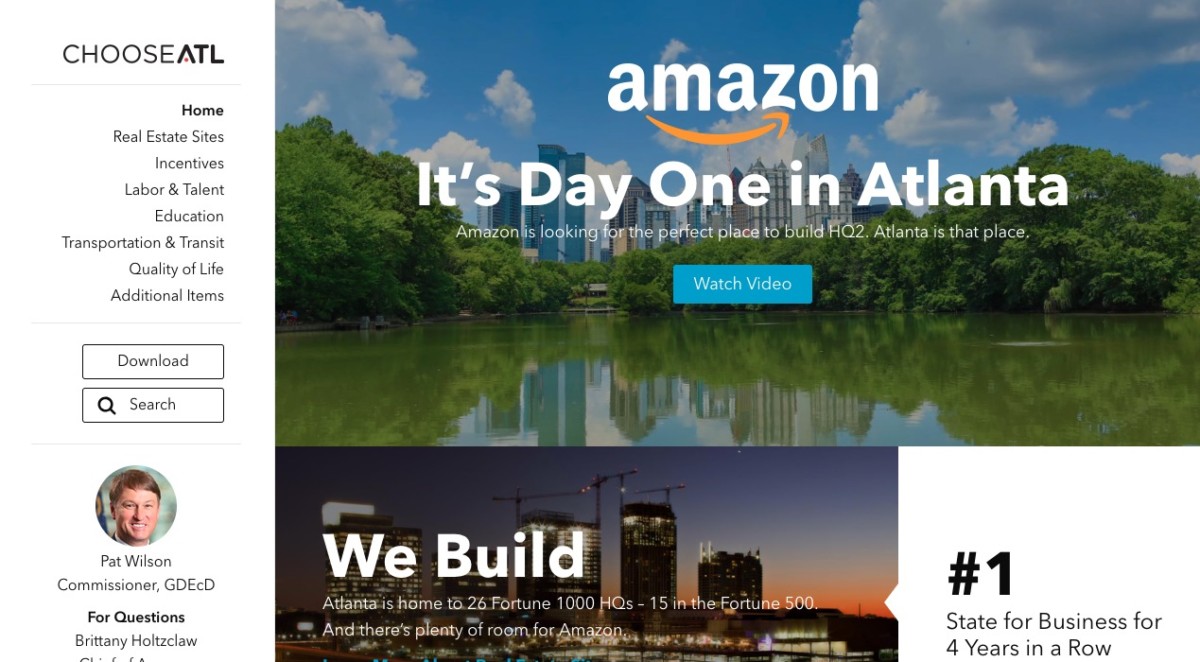 The contest among more than a dozen cities in the U.S. and Canada to host Amazon’s second headquarters is over and metro Atlanta didn’t win. But the list of incentives the state offered became a public document upon the loss. Here are some details of what was in the Georgia bid:

The Georgia Project Team, led by the Georgia Department of Economic Development, made its first response to Amazon’s call in October, 2017. Amazon said it wanted to build a second headquarters somewhere that would mean some $5 billion in construction for a place to employ some 50,000 people.

Georgia’s 2017 document was a standalone website, the department revealed today. Here are some of the things that were in there:

“Over $2 billion” in tax incentives: approximately $1.7 billion made up mostly by adding up the value of existing tax credit programs which would be accumulated over five years. (That number would have also required a tweak to the Mega Project Tax Credit law by the state Legislature.) It also included a $100 million state grant plus the “incalculable/TBD” value of a “stable, business-friendly inventing and working environment.”  The table outlining those incentives ended with ” + community + more to come.”

The page suggested nine locations. First ITP: Midtown around North Avenue MARTA, the Gulch, several buildings on either side of the Connector around 14th Street, along the BeltLine on either side of North Avenue, Quarry Yards at Bankhead MARTA and the site of the old GM plant in Doraville. Then OTP: a site in Cobb by Dobbins Air Reserve Base, a site by Gwinnett’s Infinite Energy Center and a site along South Fulton Parkway about 16 miles from Interstate 285.

The city of Atlanta, via its economic development agency, also made some pledges. One was that an unnamed Atlanta-based commercial real estate company had pretty much committed to invest equity capital and take on debt in time to finance the development of the first phase of HQ2. The value Invest Atlanta put on that was $700,000,000.

As for location, how about nearly 40 acres and 1.1 million square feet of existing “creative warehouse/office space” adjacent to the West End MARTA station controlled by Carter? “The project is fully leased, with 1-2 year terms. They have the ability, in a relatively short time period, to repurpose the entire development to provide an incredibly unique and cost effective option for Amazon,” an Invest Atlanta document read.

Invest Atlanta also offered the company a $25 million grant. The same document said the city would recommend that Atlanta City Council waive 50 percent of the Amazon Development’s impact fees, worth about $5.2 million.

In March, 2018, Georgia answered a second round of Amazon questions, via another website.

Much of it was details about existing law. Documents did mention an income tax cut that had recently been made from a maximum 6 percent to a maximum 5.75 percent. It also mentioned that a property tax abatement might be available worth something like $36.2 million over 10 years — which is a pretty standard incentive from Invest Atlanta.

In both rounds, the pitch also included typical elements from any such pitch: proximity to a busy airport, a promise to set up a bespoke employee training program, lots of college students who will become college graduates — the emphasis on Georgia Tech was strong.

One last document shows where Amazon bigwigs got taken when they came to visit Atlanta. Yes, places like Ponce City Market, the Goat Farm and the Beltline, but also maybe your favorite restaurant. The schedule included JCT. Kitchen & Bar, Two Urban Licks and Empire State South.

Tuesday morning, just as the news was made official, Ralston shared similar sentiments at a wide-ranging press conference after a day of a special legislative session. He said Georgia’s business climate is good, pointing out that Site Selection magazine has named it the best state for business six years running.

“I think we all knew northern Virginia, the Washington, D.C. area was always going to be a tough competitor. Frankly, I love New York but … I guess I want to know a little bit more about the rationale for that decision,” Ralston said.

“There are going to be other opportunities,” he said. “We’re going to keep going after them. It’s certainly not a setback.”

The state’s site that lists all the other sites

ATL, with or without Amazon, poised to cement its role as a major tech region
David Pendered November 6, 2018 7:08 pm
Partnering to Preserve Affordability
ANDPI March 26, 2018 10:59 pm

ATL, with or without Amazon, poised to cement its role as a major tech region
Partnering to Preserve Affordability