The new Hike for Health Challenge, with its $250 incentive from REI, is the latest example of the growing synergy among the leaders of 10 parks and greenspaces in metro Atlanta. 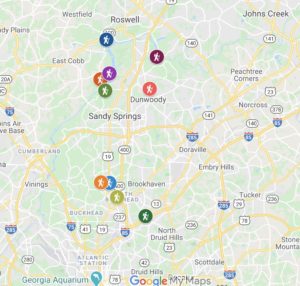 The Hike for Health Challenge encourages folks to walk trails in 10 parks in metro Atlanta during the next 10 months. The locations are marked with icons that display a hiker. Credit: hikesforhealthchallenge.splashthat.com

The challenge provides a structure intended to encourage folks to visit 10 participating parks during the next 10 months, and walk each of the parks’ trails. After their hike, walkers are encouraged to post their thoughts about their experiences along the trail in each park and use #HikesForHealthREI in their social media postings.

REI’s $250 gift card incentive is accepting registrations through Aug. 31, according to REI’s entry form. No purchase is necessary, nor is an actual hiking trip.

The idea of creating a program to encourage folks to explore parks beyond those in their own neighborhoods grew out of the ongoing, two-year conversation among the leadership of local parks and greenspaces, according to Melody Harclerode, executive director of Atlanta’s Blue Heron Nature Preserve. She has led Blue Heron since March, after leading the Sandy Springs Conservancy through a growth period.

“We’ve been meeting since August 2018, and in April asked ourselves what we could do to benefit in our region with an incentive that could really serve the public in a meaningful, exciting way,” Harclerode said Saturday.

At the time, the isolation brought on by COVID-19 was just beginning to be recognized as a threat to physical and emotional well-being. The benefits of outdoor exercise have only increased as the pandemic has lingered and its symptoms persist among a clinical group described in a recent report as long haulers.

This report, released July 25 by the Indiana University School of Medicine, found that COVID-19 symptoms go beyond respiratory and circulatory problems, topped by fatigue and body aches: 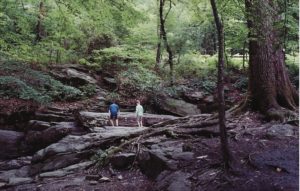 The findings seem to underscore the importance of exercise in maintaining physical and emotional health. That’s where the idea for the trail walk fits in, Harclerode said.

“This is an important time for people to strengthen their body, mind and spirit during a challenging time in our region,” Harclerode said. “We’re reading about people gaining weight, facing the stresses of job losses, with relationships both personally and professionally. To connect with nature is a proven therapy. Hike for Health is a wonderful incentive to do that.”

The organizations sponsoring the Hike for Health Challenge include:

Another benefit of the challenges is that the trails are located in the region and don’t require a trip to a distant destination to take in the benefits of the outdoors.

“Hike for Health is an opportunity to explore and raise your awareness of some of the most beautiful assets in our metropolitan region,” Harclerode said. “You learn about our communities, about history, and about the land.”