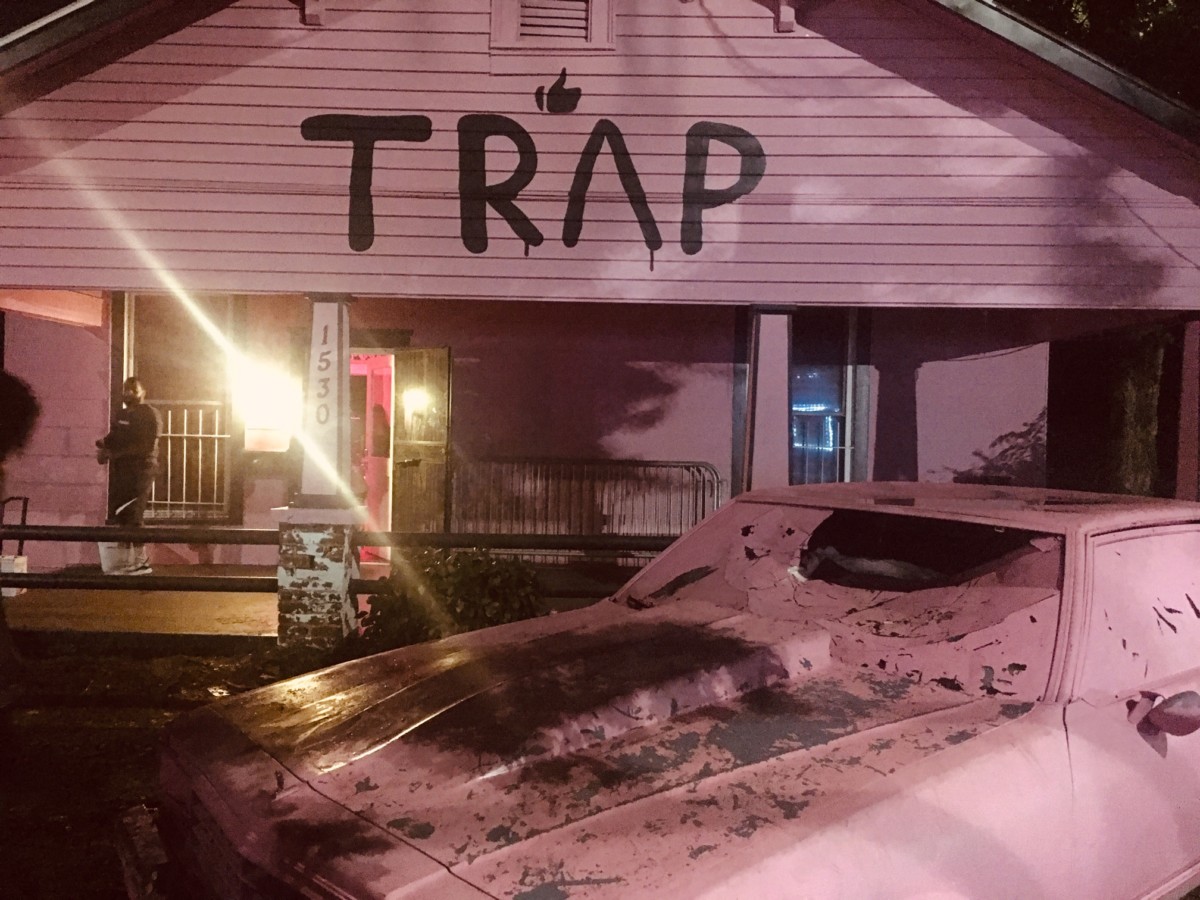 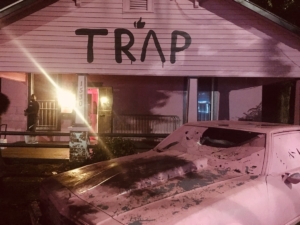 When it opened in June 2017, the Pink Trap House became an instant phenomenon, not only in Atlanta, but in the United States and the global Hip Hop community.

In a few short weeks, the Pink Trap House became the actual artistic, cultural and community gathering spot that so many gentrified real estate projects in Atlanta attempt to be.

By offering a mix of painting classes, church services, yoga, HIV-test screenings and an actual “third place” to hang for young people. The Pink Trap House was the ‘Statue of Liberty’ for Atlanta as 2 Chainz puts it, was the most culturally relevant idea to come out of Atlanta in some time, which garnered national attention.

This man drove from Philadelphia to see this, no one is coming that far the current nightlife amenities being built.

What was intended to be a marketing maneuver for Atlanta rapper 2 Chainz’s 4th album, ‘Pretty Girls Like Trap Music,’ became a bona-fide cultural and commercial signifier sorely needed for Atlanta.

This marketing maneuver led to a career reinvention for the rapper, and it changed the trajectory of many music releases since then. The Pink Trap House signaled for many the cool of Atlanta that can’t be replicated, that cool being immersed within Hip Hop and R&B.

In January 2019, the Pink Trap House aesthetic returned in grand fashion, this time with pop superstar Ariana Grande. The video for “7 rings”, led to charges of appropriation regarding Ariana Grande’s rap flow stylings of 2 Chainz as well as Atlanta rapper Soulja Boy.

Ariana Grande over the last six to eight months has been shifting her model of releases from the standard pop music rollout into the model pioneered by rappers, including 2 Chainz. This shift in releasing her music like a rapper, has led to the most successful stretch of her entire career – but there is a precedent for this.

The torchbearer for how all music artists interact with fans and utilize the internet for music success is Soulja Boy. Soulja Boy, digital music pioneer of the late 2000’s-mid 2010’s, who’s had his breakout and biggest career success while living in Atlanta.

In 2019, the most influential sound through-line of nearly every successful artist is Trap Music, a sub-genre of rap that started in Atlanta.

Whether it be well known US artists like Ariana Grande, Maroon 5 or Taylor Swift, who’s last album, 2017’s “Reputation,” which sold 1.2 million copies in its first week – featuring elements of “Trap” music as well as Atlanta, including Atlanta Trap rapper Future.

Atlanta is Hip Hop; Hip Hop is global – embrace it

Trap Music has also  created two completely new international genres of music, like Trap EDM, which has a foothold in the Electronic Dance Music (EDM) scenes, and Latin Trap, which has become a borderless staple amongst Latinx youth.

Both genres of Trap music have become their own ecosystems – containing thousands of artists, millions of sales and billions of streams.

And then there’s Saudi Arabia, where Trap Music becomes the celebration of women being able to drive for the first time in decades.

The sounds, vernacular and delivery of the genre of ‘ Trap Music can be found in songs as far as Korea, with K-pop groups such as BTS; Indonesia with Rich Brian; as well as Japan and China where Trap music is becoming its own genre to itself.

One of the biggest music artists on the planet, Cardi B, is managed by Atlanta-based Quality Control Music. Cardi B’s place as a bilingual rapper/singer and social media star is positioning Atlanta as a place we haven’t seen before.

This includes other Atlanta music labels such as Reach Records, in Christian music  or LVRN (Love Renaissance) in R&B, are also building bridges well beyond the borders I-285.

We should be building or supporting the next Tidal, Spotify SoundCloud and TuneCore here. Rather than using tax breaks to lure companies with no real vested interest in Atlanta, why don’t we actually develop an entire media and tech scene that supports homegrown music. 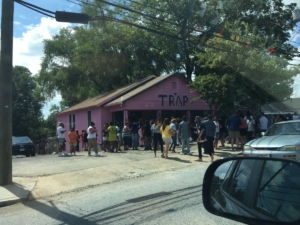 Outside of The Pink Trap House on Howell Mill Road for rapper 2 Chainz 2017 album ‘Pretty Girls Like Trap Music.’
Photo by King Williams

For many, Hip Hop is still mired in antiquated notions of violence and rowdiness. But that does not reflect how much it has grown since the dawn of the new millennium.

But only recently has the newly-gentrified Atlanta embraced what has been happening –  but only at an arm’s distance.

Everyone loves to quote “the South’s got something to say,” but only if it is commodified and stripped of its blackness. Hip Hop is rebellious, and it moves to its own drum. More specifically, it does not reflect the beat of the good-ole-boy system that still governs Georgia.

At the city level of politics, Atlanta’s Hip Hop connections really depends on who is Mayor currently, which corresponds to the level of engagement and on the state level, Hip Hop doesn’t exist.

It would behoove politicos and the business community to measure the economic and cultural impact of Atlanta’s Hip Hop and R&B music in the United States and across the world. Atlanta is the trend and the sound is everywhere…everywhere.

But there is some hope in some parts of the business community. Local tech entrepreneur Paul Judge, as well as The Gathering Spot owners – Ryan Wilson and T.K. Petersen – have recently purchased the All Three Coasts conference – A3C.

A3C is the SXSW of Hip Hop, it routinely draws north of 30,000 attendees and is one of the fastest-growing festivals in the country. It could be the flagship opportunity Atlanta needs.

The festival, which drew tens of thousands of attendees this year, had to move from Edgewood community because residents complained of the noise – despite its natural fit as a SXSW comparable event district.

If local leaders can learn from how the Atlanta United soccer franchise has embraced Hip Hop, I see no limit to how high Atlanta’s musical influence can grow.