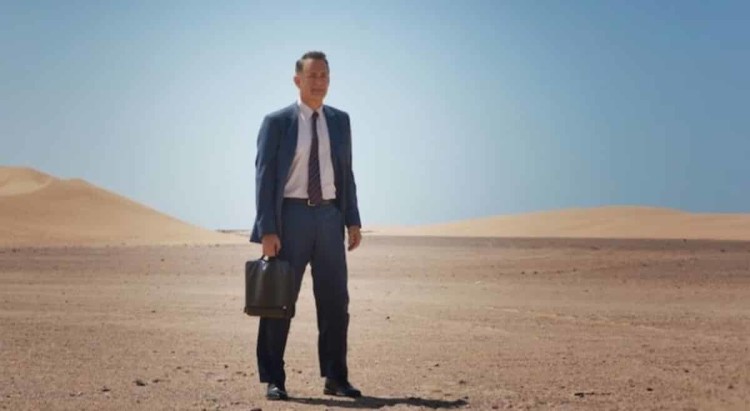 In the pensive and nimble “A Hologram for the King,” Tom Hanks isn’t waiting for Godot. But he might as well be.

Hanks plays Alan Clay, once one of the best salesmen at one of the best companies in America: Schwinn Bicycles. But then he became part of a move to outsource most of the company’s labor to China (“It seemed like a good idea at the time,” he ruefully explains) and before long, Schwinn was a mere shadow of itself, with hundreds of employees out of a job. (One of Alan’s recurring nightmares is the day he had to lay off all those people). 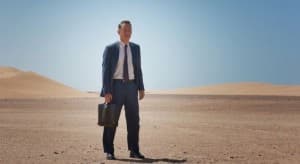 Now slightly past middle age, Alan struggles to re-invent himself in a business culture that no longer honors Willy Loman’s “smile and a shoeshine.” It’s a humbling experience — especially for someone used to being the consummate company man, a provider for both his wife (who’s divorced him) and his daughter (who understands that he can’t, just now, pay for college).

Direct Tom Tykwer (“Run Lola Run,” “Cloud Atlas”) jump-starts the movie with an irresistibly kicky opening – Alan watching his former life go up in bursts of lavender smoke while the Talking Heads’ “Once in a Lifetime” plays on the soundtrack.

An IT specialist, Alan has a new job with a company hell-bent on selling their technology, a holographic telecommunications system, to the King of Saudi Arabia (hence the title). “I need you shiny and bright,” his considerably younger boss says before shipping Alan overseas to become a stranger in a strange land.

The thing is, Alan is already a stranger in a strange land. As a Baby Boomer trying to keep up with, um, shinier, brighter colleagues half his age, Alan is as much an alien in the good ol’ U.S. of A as he is in the land of camels, burkas and no alcohol.

Each day he’s driven out to the proposed site where the King envisions a shining city on, well, not exactly a hill … more like a sand dune.  The concrete outline of that vision already exists – a weirdly ultra-modern ghost town of empty towers.

Still, they’re, well, there. The King is not. Day after day after day.

Alan tries to take care of his work force who are set up in a nearby tent with no Wi-Fi or air conditioning.  And he tries to get the charming woman who acts as the royal gatekeeper to tell him when – if? – the King will arrive.

Because he inevitably oversleeps and misses the shuttle from the hotel to the site, Alan makes friends with a talkative young driver (Alexander Black) who has a bobble-head camel on his dash, loves Chicago (the band, not the city) and is afraid he’ll be a victim of a car bombing.  Not terrorists, but a jealous husband whose wife he’s sleeping with.

The only other personal connection Alan makes is with a lovely doctor (Sarita Choudhury) who tends to a mysterious and somewhat threatening lump he’s developed on his back. Trying to get an idea what might be wrong, she asks him how he’s feeling. He talks about confusion, lack of energy, a loss of direction.  In other words, he talks about life itself, especially for someone adrift in a life he never expected.

At this point, there is probably no actor on the A List who can do this sort of role as well as Hanks. More than ever he recalls Jack Lemmon in the last part of his career – the decent regular guy who’s doing his best, but somehow discovers his “best” isn’t what’s wanted anymore. “Save the Tiger,” for which Lemmon won his second Oscar, comes to mind.

The film is filled with pungent cultural observations. Black-clad Saudi women pause briefly before a window display of sexy lingerie. Alcohol is disguised as olive oil. Certain highway exits are marked “For Muslims Only.”

On a side trip to Mecca, their car is surrounded by dozens of child beggars. Alan isn’t sure what to do. But Black is.  He points a finger toward the sky. Translation:  “Allah will provide.” That works? Alan gasps as the children melt away. “Well, it does in this car.”

Alan often finds himself lost in translation – much as Bill Murray did in Japan.  But Murray’s situation was more comic; Hanks’s has its funny moments, but at the film’s core is an underlying melancholy that slides into a surprising last-act affirmation. As it turns out, “A Hologram for the King” isn’t about the death of a salesman at all.  It’s about his re-birth.