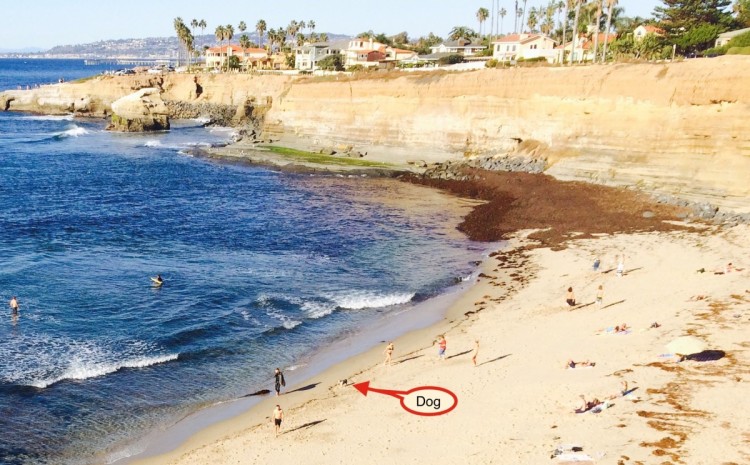 San Diego – San Diego built what a plaque says is the nation’s first leash-free dog beach, in 1972, at a time the beachfront community was blossoming into a surfing capitol and the Haight-Asbury of southern California. 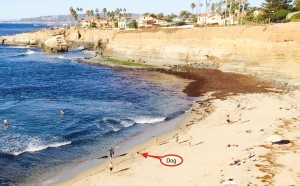 City leaders never turned back from their decision to provide a place for dogs and their owners to play together off leash. And they show it’s possible to combine leash-free with free-range play areas for pets, as opposed to the fenced-in areas common in Atlanta.

On any given day, dogs and their companion persons are playing catch with Frisbees on Dog Beach, said to be the nation’s first leash-free dog park; chasing balls at Doyle Community Park; and jogging together along the 5.2-mile asphalt path on Fiesta Island, a manmade island in Mission Bay.

Regulations are similar to leash-free dog parks in Atlanta. Folks enter off-leash areas at their own risk and accept full responsibility and liability for their dog’s actions. 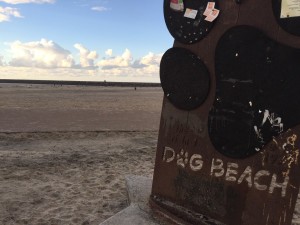 Owners are required to clean up after their dogs. However, one difference between the dog parks in San Diego and Atlanta is access to waste receptacles. In San Diego, bags filled with pet poop can be dropped in receptacles that seem to be abundant enough to be convenient. In Atlanta, receptacles sometimes seem to be few and far between.

A more meaningful distinction is that dog parks in San Diego are wide-open spaces. Meaning, there are no fences, as there are at the leash-free area of Piedmont Park and O4W Freedom Barkway.

Dogs are free to run where they choose, which often depends on where their companion person throws a ball. That said, they seem to stick with their friends as opposed to chasing after newcomers, chases that create those moments when humans wonder if their dogs will “play nice” with others.

The unofficial code of conduct is for humans to pay close attention to their dogs. That’s the case in Atlanta, as well. But at Cadman Dog Park, for example, dogs and humans tend to congregate in clusters that are closer together than is common at, say, Railside Dog Park at Castleberry Hill – which was built on a 2-acre site donated by Jerry Miller, who helped develop the neighborbood of former industrial buildings. 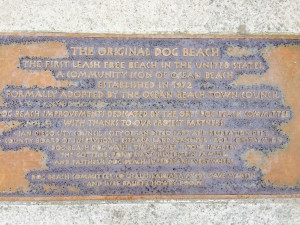 This plaque commemorates Dog Beach, which the plaque says is the first leash-free beach in the nation. Credit: David Pendered

At San Diego’s famed Dog Beach, in the Ocean Drive neighborhood just north of downtown San Diego, dogs and humans get out of their vehicles, cross a parking lot and sidewalk, and step onto sand. A fair number of folks arrive by bicycle. It’s not unusual to see a skateboarder being pulled by a dog.

Dogs have free range in the park, all the way from the San Diego River toward the Ocean Beach Municipal Pier, the longest concrete pier on the west coast. The only worry is run-off that occurs following rain events. Signs caution against getting in the water because of contaminants that may have flowed into the river and Pacific Ocean.

The plaque that commemorates the beach is placed in a concrete sidewalk near the main entrance to Dog Beach. It reads: 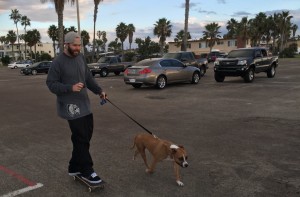 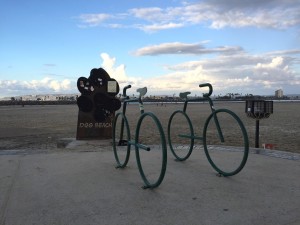 San Diego provides plenty of bike racks for those who prefer to peddle to a leash-free dog beach. Credit: David Pendered