No where has it been more apparent that metro Atlanta is in a, “best of times, worst of times,” moment for housing costs than at last week’s meeting of the Metro Atlanta Housing Forum.

Atlanta’s tale of two cities is evident in the burnt and boarded houses that are flanked by new apartments in this view from the balcony of a rehabilitated home in the Pittsburgh neighborhood. Credit: David Pendered

The best of times involves the infusion of $104 million into efforts to create stable homes for the homeless and low income. Bruce Gunter, a longtime provider of affordable homes, reminded the audience to savor the fruit being harvested after a lot of hard work by advocates.

The worst of times quickly followed Gunter’s remarks. Fulton County leads the nation in terms of the rate of home renters who are evicted or put on notice of eviction, according to a new report from the Federal Reserve Bank in Atlanta.

As one panelist observed, the situation involves more than just the cost of renting, let alone purchasing, a place to call home.

“We are in an unprecedented time in Atlanta in housing,” said Mitch Harrison, with the First Communities Management Company. “We are seeing rents outpacing wages at an alarming rate. That, ultimately, is the core of what we’re trying to solve. We need to have more people affording rent. That snowballs into all sorts of conversations.” 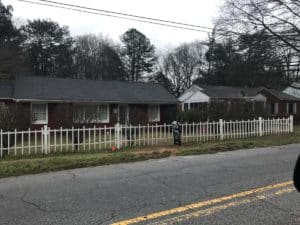 The eviction rate of 16 percent in the ZIP code surrounding the Jefferson Park neighborhood, near Atlanta’s airport, is the highest in Fulton County, which leads the nation in evictions and notices delivered, according to a report from the Federal Reserve Bank in Atlanta. Credit: David Pendered

Atlanta leads the nation in income gap, with the Brookings Institute reporting that the wealthiest households bring in nearly 20 times the income of those near the bottom.

The region’s loudest conversation about moving the needle is occurring in the neighborhoods located west of the new Falcons stadium. Money helps – a total of $30 million has been earmarked by Atlanta and Falcons owner Arthur Blank’s Westside Neighborhood Prosperity Fund to help improve Vine City, English Avenue, Castleberry Hill and other adjacent neighborhoods.

The Westside Fund vowed to allocate the entire $15 million by December 2017. The latest report on the foundation’s website indicates $4.8 million remains available. 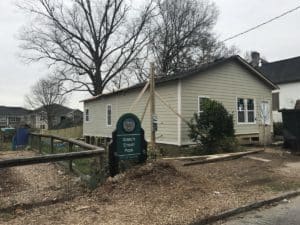 Atlanta has planted its mark on a community garden started by Pittsburgh residents by marking the area as a city park. Credit: David Pendered

Meanwhile, a renewed interested in home ownership is emerging Pittsburgh neighborhood, located across the Downtown Connector from Turner Field.

Pittsburgh still bears the mark of being the region’s ground zero during the foreclosure crisis. Some homes remain boarded or burnt. Investors, many of them fraudulent, had driven the median appraised value to $120,600, according to a 2008 report by the Atlanta Neighborhood Development Partnership, Inc. At the time, median sales prices were $38,500 in the surrounding 30310 ZIP code. ANDP is a non-profit created in 1991 to promote affordable housing.

The Annie E. Casey Foundation has been working in Pittsburgh for more than a decade. The foundation has purchased homes in hopes of protecting them for future redevelopment. The effort to move properties from land-bank to home-ownership status is underway. Casey launched a program in 2015 to rehab 53 homes throughout the Pittsburgh neighborhood.

Natallie Kaiser, the Annie E. Casey Foundation’s senior associate in Atlanta, celebrates the sale of a home to a buyer who received down payment assistance through a program of the Atlanta Neighborhood Development Partnership, which is headed by John O’Callaghan. Credit: David Pendered

The foundation is partnering with Atlanta and a number organizations to rehabilitate and sell homes at affordable prices. ANDP is one such partner and is working on at least a dozen properties. ANDP also is promoting homeownership in Pittsburgh with proceeds of a $25,000 grant from NeighborWorks, a national organization that promotes affordable homes and community development.

Natallie Kaiser, Casey’s senior associate in Atlanta, said green sprouts are emerging from the devastation that Pittsburgh experienced. Kaiser attended a March 17 event where ANDP launched its $2 million down payment assistance program for eligible homebuyers by showcasing a new homeowner.

“We are working to ensure a variety of people have an opportunity to live in Pittsburgh and create a community where people can really thrive,” Kaiser said. “Many people are working to protect the living legacy of Pittsburgh, and for many years to come. We intend to be promoting this opportunity strongly, and encourage people renting in the neighborhood to come buy now while there is such an opportunity.”