Housing prices are likely to remain high as the number of new residential starts in April was lower than in March. Rising construction costs prompted builders to delay new starts, according to a reading of two separate reports released Tuesday. 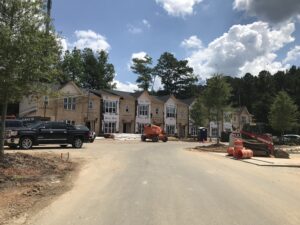 A new federal report shows the rate of residential construction declined in the past month, which is likely to result in continuing high prices for housing. Credit: David Pendere

For advocates of affordable housing in metro Atlanta, the reports underscore the shape of obstacles in increasing the number of homes priced for those earning salaries of schoolteachers and store clerks. Lower production rates will result in continuing supply shortages. This will maintain upward pressure on the prices of for-sale and rental residences.

One bellwether that’s not often mentioned is the number of permitted residences that haven’t started construction. This indicates a developer spent all the money necessary to start construction and secure a permit, but decided to wait.

In the South, the number of residences authorized for construction, but not started, has been climbing steadily this year, from 111,000 in January to 132,000 in April, according to the report released Tuesday by the Census and U.S. Department of Housing and Urban Development. Nationally, the number has risen from 204,000 in January to 232,000 in preliminary April estimates.

Robert Dietz, chief economist for the National Association of Home Builders, focused his comments Tuesday on the national decline in permits issued:

The National Association of Home Builders reports the ongoing rise in prices for lumber used in residential construction. Credit: nahbnow.com

Lumber costs are one way to measure cost of materials. Lumber prices continue the spike that began in April 2020, soon after the start of the coronavirus pandemic. The latest NHBA report, on Tuesday, shows the price of 1,000 board feet of framing lumber has risen to about $1,500 as of May 14, up from beneath $600 on Nov. 27, 2020. The price was below $300 in April 2020, NAHB reported.

The Biden administration has been requested by construction trade groups and some Republican senators to reduce tariffs on Canadian lumber and other imported building materials. U.S. Trade Representative Katherine Tai told senators last week that she will bring up tariffs with her Canadian counterpart in meetings next week, according to a report Sunday by reuters.com. Tai said Canadians have not expressed interest in negotiating over U.S. claims that Canadians dump their lumber into the U.S. market at low prices subsidized by Ottawa.

The South experienced a greater drop-off in residential construction than the nation as a whole, comparing preliminary April numbers to revised figures for March, according to a computation of numbers in the report issued by the Census and U.S. Department of Housing and Urban Development.

In the South, preliminary figures for April show 804,000 units were started. That’s down by 11.5% from the 908,000 units in the revised March estimate, according to the federal report.

New starts in the South also have swung broadly since late summer 2020, as the economy settled from the effects of the coronavirus pandemic. From a low in September 2020 of 763,000, the number reached a high of 908,000 in March before falling in April to 804,000 – a rate more typical of the past seven months.

Nationwide, the drop-off was 9.5 percent from March revised numbers to April’s preliminary estimate. The monthly fluctuations ranged from a low in September 2020 of 1.45 million to a high in March of 1.57 million.