With lumber prices nearly tripling since April, the nationwide rise in home prices was expected in the Beige Book report of economic conditions released Wednesday by the Federal Reserve. 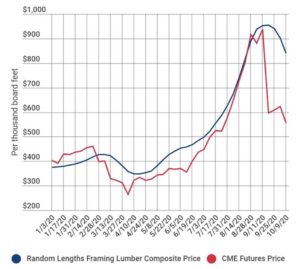 A spike in lumber prices that started in April has added more than $16,000 to the price of a typical new house. A drop in lumber prices is expected by mid 2021. Credit National Association of Home Builders

Only now are lumber prices beginning to ebb. Import duties of up to 24% on Canadian lumber are to be reduced to 8% by court order in November. Demand is softening, as do-it-yourselfers have gotten it done, and the winter slowdown in house construction begins in portions of the country, according to a report by forbes.com.

The bite inflicted by the price hike in lumber and other commodities showed up in the Beige Book, the national economic report conducted eight times a year by the Federal Reserve. The book is an anecdotal report from bankers and business leaders in each of the 12 Fed districts.

All but one of the 12 Fed districts reported much the same thing with housing since the Sept. 2 report – prices are up and supply is scant. New York was the only district to report a general abundance of housing and falling prices. Residents are leaving in droves, and not just because of the pandemic. 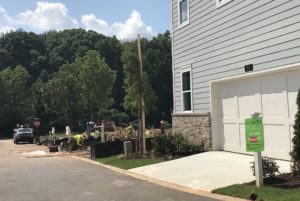 The Empire State exodus started in 2010 with middle-class workers and high-income earners, state lawmakers reported in January. The pandemic worsened the flight, with New York City residents heading to less densely populated areas and prompting Gov. Andrew Cuomo in August to urge city residents to return and resume paying city and states taxes, according to a report by thehill.com.

In the Atlanta District, residential construction was not keeping pace with demand across the district that includes Alabama, Florida and Georgia, and parts of Louisiana, Mississippi and Tennessee. The report observed:

The New York Fed covers the state of New York; northern New Jersey; one county in Connecticut; and Puerto Rico and the U.S. Virgin Islands. Of housing, the New York Fed observed: 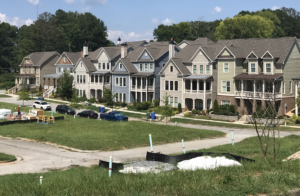 Construction continues at West Town, where house prices start in the mid $600,000s at the development located west of the Atlanta water reservoir, just off Huff Road. Credit: David Pendered

The Atlanta Fed’s snapshot of the overall economy showed a region holding its own during the pandemic. This is the entire section on the regional summary of economic activity: