A drop-off in housing starts in metro Atlanta will be one likely consequence of a state economy forecast to slow through 2021, according to a new report by Georgia State University’s top economist. A short supply of housing has already helped drive up sales and rental prices and fueled the lack of affordable housing, according to the Atlanta Regional Commission. 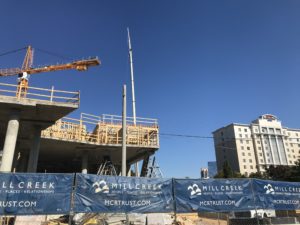 Metro Atlanta’s current residential construction is forecast to slow over the next two years, according to Georgia State University’s top economist. Modera Prominence, located in Buckhead at the intersection of Lenox and Piedmont roads, is to open in 2020 as construction is expected to taper off. Credit: David Pendered

Housing starts were cited just once in Report for Georgia and Atlanta, released Wednesday by Rajeev Dhawan, of GSU’s Economic Forecasting Center at Robinson College of Business.

The few words represent a chilling prospect for those who look to the sector to build more houses. A rising inventory would help alleviate a housing shortage that has helped drive up housing prices and rental rates, according to entities including the ARC. The one statement about housing in the forecast observes of Atlanta, meaning metro Atlanta:

The forecast comes as housing starts have yet to recover from levels leading up the Great Recession. As the ARC observed in a June 2017 report, Regional Snapshot: Affordable Housing, housing starts had fallen to a rate half that recorded before the recession:

Dhawan’s report observes that job creation has deviated wildly in Georgia this year – by almost 20,000 jobs from the first to second quarter. Job creation is a bellwether of the overall economy.

As worrying as the big shifts is the deterioration in the quality of jobs, compared to past cycles, according to Dhawan’s report.

The region’s affordable housing situation is exacerbated by the slowdown in residential construction, which has not recovered the rate preceding the Great Recession. Credit: ARC, June 2017, ‘Regional Snapshot: Affordable Housing’

First, the job gains by quarter:

Regarding the swings in job creation, Dhawan described them as both an anomaly and the consequence of short-term jobs that ended when they had run their course:

Of the jobs created at the end of 2018, 53 percent were in categories that Dhawan observed are a proxy for temporary jobs – retail trade, hospitality and administrative services.

Fast-forward to March and April, and two-thirds of the jobs lost were in these three categories – meaning their purpose was achieved and employers reduced their workforce. This helps explain the fluctuations in the first and second quarters, according to the report. 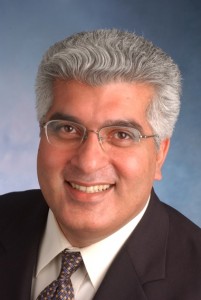 Second, the deterioration in both the number of jobs and their quality when comparing 2014 to 2018:

Woes in the global scenario mean the local jobs picture isn’t likely to improve in the coming year and a half, to two years, he predicted.

“Chalk it up to the ongoing global slowdown in Europe and Latin America, coupled with our trade spat with China and a weakening domestic investment climate,” he said in the statement. “Global and domestic headwinds are buffeting Georgia’s catalyst sectors, making for an overall lower future growth path.”

Dhawan’s report on the region and state includes a section of highlights that observes: