A broadside of the Declaration of Independence, such as this one by the Congressional printer John Dunlap, traveled to Georgia in 1776 with a letter of transmittal signed by John Hancock. The Hancock letter was sold Jan. 27 at Sotheby's. Credit: National Archives
Share14
Tweet
Share
Pin
Pocket
WhatsApp
Buffer6
Email
Reddit
20 Shares 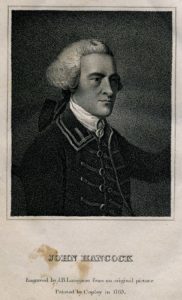 King’s I Have a Dream speech and the Declaration of Independence speak to fundamental human and civil rights at the core of the aspiration of the American experiment, according to Seth Kaller, the antiquarian who purchased the Hancock letter on Jan. 27.

“Hancock wrote that the Declaration should be, ‘considered as the ground and foundation of a future government,’” Kaller said Monday. “I think he was right. Despite the fact that slavery was part of their society and government, the founders laid out a vision of a government that leans towards freedom.”

The Hancock letter to Georgia has been in a series of private collections and first sold at auction in 1899, according to the provenance established by Sotheby’s. The Georgia State Archives was not established until 1918 and, even today, has few records related to the Revolutionary War and Archibald Bulloch, president of the Georgia Council of Safety in 1776.

Kaller has not set a public price on the document, though a “generous discount” is offered to a buyer who would return the document to Georgia, or place it in an appropriate museum or library. The letter was sold for $1,040,000. 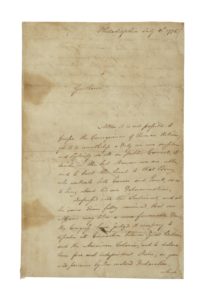 The first leaf of John Hancock’s letter to Georgia, announcing the adoption of the Declaration of Independence, was purchased Jan. 27 at Sotheby’s. Credit: Seth Kaller, Inc.

Kaller previously facilitated a transaction that brought to the Atlanta History Center 52 field orders handwritten by Union Gen. William T. Sherman, from the 1864 Battle of Atlanta.

Hancock wrote 13 nearly identical letters between July 5 and July 8, 1776 – one for each of the 13 former colonies. Each letter was delivered to its respective state, along with a broadside of the Declaration of Independence printed by John Dunlap, the official printer to Congress. As president of Congress, Hancock signed each letter under this closing: “I have the Honor to be, Gentlemen, Your most obedt & Very hble Servt John Hancock Presidt.”

Five of the 13 Hancock letters can be located. Kaller noted that all five are known because they were sold within the past 100 years, and Kaller said he hopes that at least some of the missing letters do exist. Maybe this sale will encourage them to be looked for, he said.

Just as King’s speech electrified the crowd gathered for the March on Washington, the public reading in Georgia of the Declaration of Independence was well received on Aug. 10, 1776. 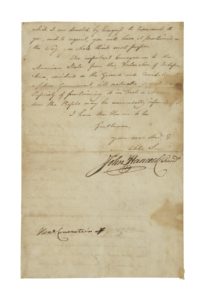 The Declaration of Independence, transmitted to Georgia in 1776 by this letter, was so well received in Savannah that residents conducted a parade and mock funeral for King George the Third, of Great Britain. Credit: Seth Kaller, Inc.

That night, residents staged a parade for the mock funeral of King George the Third: 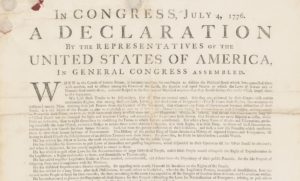 A broadside of the Declaration of Independence, such as this one by the Congressional printer John Dunlap, traveled to Georgia in 1776 with a letter of transmittal signed by John Hancock. The Hancock letter was sold Jan. 27 at Sotheby’s. Credit: National Archives

The Declaration of Independence states:

The text of these documents are readily available online, but Kaller observed that there is something special about seeing the originals.

“When we know we are seeing something authentic, we experience it differently,” Kaller said. “Roughly 100 percent of all people wouldn’t be able to tell a fine copy of the Mona Lisa from the original, but we will wait on line to see the original. I’m thrilled to be able to play a part in this story. Bringing Hancock’s iconic letter back to Georgia I hope can inspire renewed interest in the founding, and more conversation about the meaning and vision set forth in our founding documents.” 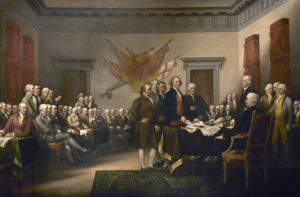 Thomas Jefferson stands before John Hancock, seated at the table, in this painting by John Trumbull that depicts the signing of the Declaration of Independence. Credit: Architect of the Capitol