Advocates of the call to remove a cannon from the Decatur Square, used in the expulsion of Native Americans from Georgia, are now framing the cannon in the context of international human rights. 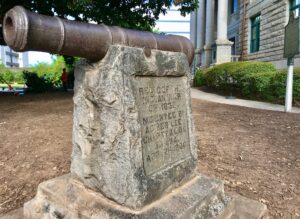 This cannon is memorialized as a ‘relic of the Indian War of 1836,’ which was part of the campaign to remove Native Americans from Georgia. Credit: Kelly Jordan

At an event Monday, the cannon was tied to the discovery of more than 700 unmarked graves in Canada, all thought to be of First Nation school children. Coincidentally, on Monday a Canadian tribe announced that at least 160 previously unknown graves have been discovered outside a former boarding school, according to a report by theguardian.com.

The recently discovered graves are located at multiple sites in Canada. They share locations near Catholic-run boarding schools, now closed, that the government required First Nation youths to attend. Starting in 1894 with the Indian Act, Canada’s stated goal regarding Aboriginal people was to separate youths from their parents, language and culture, and Christianize and assimilate the youths into white culture, according to the final report, in 2015, from Canada’s Truth and Reconciliation Commission.

The connection between the cannon and graves near schoolhouses is that both represent tools used by colonialists to remove Indigenous peoples and erase their culture, according to Paul McLennan, who co-chairs the Beacon Hill Black Alliance for Human Rights’ Decolonize Decatur Committee.

Advocates for removing the cannon made this case Monday, at a rally to renew the public outcry to remove the cannon, as a Confederate memorial was removed in 2020. An ecumenical group of faith leaders signed a petition supporting the removal of the cannon. 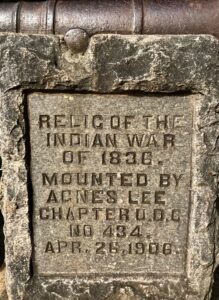 This cannon was installed by the United Daughters of the Confederacy on the Decatur Square in 1906, according to the plaque. Credit: Kelly Jordan

“Genocidal policies were used in both countries,” McLennan said Tuesday. “I thought that connecting those dots, the cannon and schools, is important because, going back to the Doctrine of Discovery, the complicity of the Christian church in colonialism is well established.”

The Doctrine of Discovery is a series of rulings issued by the pope in the 1400s to give explorers the ecclesiastical authority to claim land in the New World, despite its occupation by Indigenous people. These papal bulls authorized explorers to take control of the local inhabitants and seek to convert them to Christianity.

The doctrine found its way into western laws and is alive today. In 2005, the U.S. Supreme Court cited the doctrine in rejecting a claim by the Oneida Indian Nation regarding ancestral land in New York. The ruling was written by then-Justice Ruth Bader Ginsburg.

An ecumenical group of churches signed the petition requesting the cannon to be removed. The pastor of a Lutheran church said his role as a faith leader won’t permit him to not join in the call.

“If you try to detach Jesus from everyday life, you’re missing the whole point,” said Josh Linman, pastor of Common Table Decatur. “The ‘good news’ can’t exist when people are suffering. Walking by this cannon, as they did the Confederate oblisk [removed in 2020], reminds them of the hatred that exists in this country.” 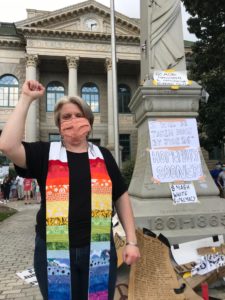 The day the Confederate monument was removed from Decatur Square, on June 18, 2020 protestors had continued a routine of calling for the monument to go. Credit: Kelly Jordan

In Canada, public pressure is mounting for accountability on the treatment of children in the boarding schools.

Prime Minister Justin Trudeau has asked Pope Francis to apologize for the church’s role in treatment of First Nation children, according to a report by abcnews.go.com.

Five Catholic leaders of Saskatchewan wrote a letter July 3 to their archdiceses. The say a fundraising effort is underway to help compensate families and survivors of the boarding schools. Signed by two archbishops and three bishops, the letter begins:

One signer, Don Bolen, archbishop of Regina, wrote a June 24 letter to the chief and people of Cowessess First Nation that observes:

Previous Article
How Atlanta might — and might not — share its controversial public safety training center
Next Article
Dueling political hearings on crime, election reform set for July 19