A 35-count federal indictment for allegedly stealing money from the Hurricane Michael recovery effort was released last week in Panama City, Fl. The sum of $5 million was cited in the case against five defendants – including the former city manager and the community services director of Lynn Haven, a town clobbered by the storm. 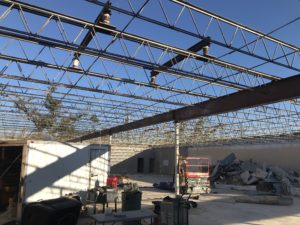 The former city manager used the emergency powers vested in his office after the storm to secure bogus clean-up services and other matters related to Hurricane Michael, according to a statement released with the indictment.

The indictment alleges the city manager’s inside accomplice was the city’s community services director, who signed off on bogus invoices and committed other unlawful acts. Three area business operators were their partners, according to the statement. 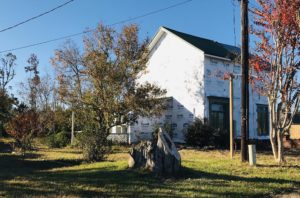 The locally famous Bolinger-Cooley House, in Lynn Haven, had been restored for ‘continued life as a landmark home.’ Hurricane Michael evidently blew off siding, which is being repaired. Credit: David Pendered

A sense of betrayal permeates statements from three law enforcement authorities issued after the indictments were unveiled on Nov. 20: 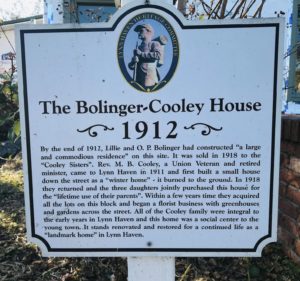 Built in 1912, the Bolinger-Cooley House in Lynn Haven was a noted residence that had been restored before Hurricane Michael and now is undergoing addition restoration work. Credit: David Pendered

Lynn Haven didn’t make many headlines during or after the Category 5 storm that came ashore Oct. 10, 2018 at Mexico Beach, Fl. and left a path of snapped trees, ruined crops and devastated structures all the way to Augusta.

But Lynn Haven suffered its share of damage. More than a few area residents fled to Lynn Haven, thinking it was far enough inland to be a safe haven. It wasn’t. Blue tarps spread across leaking roofs are still common. Drainage ditches are still being cleared of fallen pine trees that stem the flow of rain water and turn some low-lying areas into breeding grounds for insects and nuisance critters. 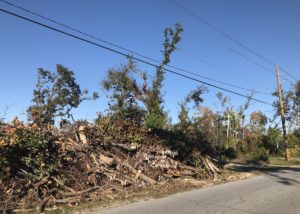 Debris collected after Hurricane Michael awaits haul-off in Lynn Haven, in a neighborhood where most of the storm-damaged homes have been repaired. Credit: David Pendered