In debate on saving a historic West End house, everyone can agree there’s gotta be a better way

Last month, I told you about 731 Lawton St., a 120-year-old house in the West End Historic District that’s on the verge of collapse after years of neglect. I wondered if a preservation process with more collaboration and fewer crackdowns might be a better way of saving the many such buildings around town.

I didn’t hear from the homeowner, Jordania Williams, for that column, but since then she’s reached out to say her experience has been far from collaborative. On Aug. 25, after months of deferrals, the Atlanta Urban Design Commission finally approved her plan to rebuild much of the house — but with a condition that requires redesigning it, a move Williams calls “talking in circles” and has her more inclined to pay an attorney than an architect. Then there’s the review and ongoing commentary from the Preservation & Urban Design Committee of West End Neighborhood Development, which Williams feels treated her unfairly and where some mutual distrust has simmered.

But before we get to that, let’s talk about what the homeowner and the committee agree on, because that collaborative future might still be in reach for future projects. They agree the surviving part of the house — a porch decorated with a cherub — deserves to be saved. And they believe a more effective method, especially for imminently endangered buildings, would include a pre-application meeting with property owners and City experts, rather than today’s iterative process, which can become a guessing game that drags on for months or years and hikes the costs.

“I think they should take into account a homeowner is paying for these things to happen and it’s not a cheap process,” said Williams, who describes the current process as often “working backwards.” She estimates the back-and-forth has cost her an extra $10,000 to $20,000 so far.

“There is a better way,” says Caleb Racicot, the WEND committee’s co-chair and a professional planner with expertise in writing historic codes. The City review of alterations to historic properties can include an “onerous” requirement for the applicant to conduct a survey of surrounding properties themselves and provides short notice on requested changes prior to UDC votes, he said. He suggested more proactive studying done by the City itself, an ombudsperson to help applicants and, like the City does for major rezoning cases, a pre-application review with staff members so everyone knows the playing field before UDC votes. And maybe that could all be “streamlined” in urgent cases.

“Can there be public resources to figure this stuff out?” he asks “… [B]ecause I hate, hate, hate spending every other Wednesday with applicants [offering the committee’s advice] because we don’t know what the City will be saying.”

Fact is, there aren’t many public resources right now in the City’s tiny Historic Preservation Studio, which in many ways is already punching above its own weight. Atlanta is actually ahead of the curve on nationwide changes in how historic preservation is defined and enforced, but many of its good ideas remain on paper. One change on the proactive side is the recent hiring of a code enforcement officer specifically for historic preservation and districts, which will supplement the staff’s other independent reviews.

“This can be an additional source of information about a property’s situation that can be taken into account by the Urban Design Commission,” said Paula Owens, a spokesperson for the Department of City Planning.

Of course, an election year is a good time for citizens to request more such resources. 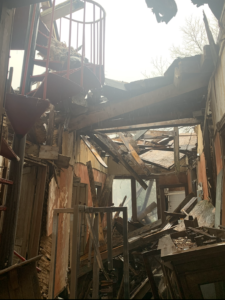 The damaged interior of the rear of the historic house at 731 Lawton St. in the West End as it appeared in late July, provided by owner Jordania Williams.

Williams, who runs a daycare and an online clothing boutique, grew up next door to 731 Lawton and wants to return to the West End. She says she loves the historic homes, and her mother still lives next door. Williams bought 731 from an owner who had let it fall into major disrepair, with a caved-in roof, and she thought preservationists would be thrilled she sought to rebuild it. Instead, she says, she feels viewed as unworthy of the work and subjected to a process dragged out to wear her down mentally and financially so she has to sell to someone else.

“It’s just dragging it out on purpose,” she said. “I really do believe it’s personal. It’s very personal.”

In government, as they say, nobody’s entitled to a perfect process, just a fair one. There are of course good reasons to have a bureaucracy to temper decision-making and whose technocratic expertise may not match outsiders’ ideas of common sense. Neighborhood associations are notorious for internal dramas and inevitable deeply personal tensions between homeowners and community rules.

All that being said, the review of 731 Lawton does not always seem focused on the urgency that the surviving historic facade might fall over or catch fire any day.

There’s the traditional disconnect between the UDC and the police-operated Code Enforcement, which again ordered a safety-related demolition of 731 Lawton Aug. 26, the day after the UDC approval. (Never fear, the City’s glacial permitting pace means any tear-down would be six to 12 months away, Williams said she was told.)

Williams says she’s been confused by the UDC decisions, which can be hard for the general public to follow as well, and came after months of deferrals and other wrangling. To paraphrase “The Princess Bride,” the UDC’s “approval” may not mean what you think it means. An April approval of demolishing the house really meant an attempt to save the porch from the already ruined rear. And the approval of the reconstruction plan really meant a size-and-style do-over in collaboration with City staff — which could speed things along after all, but at the moment left Williams’ architect repeatedly asking what the decision meant.

Then there’s the WEND preservation committee, where personal conflicts have eroded the advisory relationship. (Marquise “Tony” McNeal, president of WEND, did not respond to a comment request.) Williams said she felt targeted by hyper-scrutiny, starting with pre-meeting posts on community and personal Facebook pages by Racicot and his co-chair, Kathi Woodcock. A rumor that seemed to come from that early discussion, and mentioned by the co-chairs in interviews, was that Williams might be taking over the property from another family member who let it fall into disrepair, which she says is not true and put her on the defensive from the start. The committee also began calling it the “Cherub House,” Williams said, a name it never had before that makes it stand out from other requests.

Williams said that such rumors and Facebook comments to the effect that she might not be able to afford the rehabilitation work made her feel the process got too personal and has become biased. “There’s nothing wrong with them loving historic homes. I do, too,” she said. “But why create this type of space? … It’s always craziness.”

Supporting her in those concerns are two other residents formerly associated with WEND: Joanne Rhone, a longtime neighborhood activist who helped create the historic district and until recently served on the preservation committee; and Larry Carter, a former board member now running for City Council.

Rhone said she believed committee reviews often went off track on such personal issues as the size of a car an applicant owned and that she quit in 2018 over concerns that Racicot had a “conflict of interest” because he had a code-writing contract with the City and his husband got a job in the City Planning department. Rhone is also a Williams family friend and has other issues with WEND’s direction. Racicot said he had no conflict of interest in any legal sense, and the City confirmed that his husband does not work with UDC or Historic Preservation in any capacity.

Carter went through the UDC process for changes to his home in 2017-2019 and said the preservation committee got personal with him as well. In early 2019, he got a Fulton County court to issue a temporary protective order against Woodcock related to her involvement in the process, which included complaints about information she sent him about the house and about going onto his property. Woodcock says Carter misinformed the court about her actions and that she only sent him legitimate info and visited once with permission. She believes the order was intended to bar her from UDC comment — which it did — after she reported that work was done on his property without a permit.

Racicot and Woodcock say the committee doesn’t play favorites. “We treat everyone, residents, investors, and applicants, equally,” said Woodcock in an email. “The Historic Regulations are City of Atlanta ordinances. We work with applicants to formulate plans that comply with the law, we help them navigate the AUDC process, and express our recommendations at the commission’s public meetings.”

And, Woodcock noted, the committee ultimately supported Williams’ plans, albeit with the conditions requiring alterations.

But, Racicot acknowledged, the tone sometimes gets confrontational. “Kathi is — I don’t know how to say this, I know you’re taking notes — she’s not as diplomatic as me. We tend to play good cop/bad cop,” he said. “I think part of it is personally driven, given that some people don’t have as good people skills as others.”

And, he says, the committee has its internal differences on the big changes underway in historic preservation. “This is a really important, not only Atlanta conversation, but a national conversation [about]… what is the future of historic districts in this era of Black Lives Matter, this era of housing crisis, this era of global warming,” he said. Some members, hewing to classical views, “see a historic district as freezing something in time,” he said. “I tend to take the approach that neighborhoods are not museums. They are reflections of people who have [inhabited] and currently inhabit them.”

Williams says she thinks some of the historic details preservationists might prefer in the new construction are over the top, but that she’s sincere about attempting to save the porch. She feels the process, rather than extending a helping hand, has thrown more obstacles in her way while the clock ticks.

“It’s just getting worse and it’s getting worse,” she said of the house’s condition. “…But I am determined to get it right to get it done. And for all the people who thought it wouldn’t happen.”

Update: This story has been updated with information about the temporary protective order case Carter obtained against Woodcock.