Inside the loop: A look at who’s behind the push for a transportation sales tax

This story was updated Tuesday morning. The flow chart depicting the campaign structure was changed to reflect new information on its social media vendor as provided by Citizens for Transportation Mobility, Inc.

A baker’s dozen of community leaders serve on the boards of two campaigns to promote passage of this summer’s vote on a proposed 1 percent sales tax that is to raise $6.14 billion to build roads and transit.

The two campaigns are run by two distinct organizations. Both MAVEN and Citizens for Transportation Mobility, Inc. are set up with the Secretary of State as non-profit corporations, and one is registered as a fund-raising committee with the Georgia Government Transparency and Campaign Finance Commission. 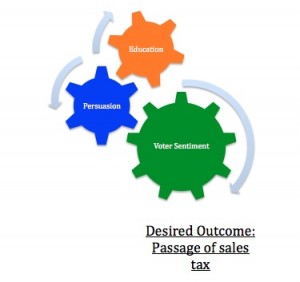 The campaign strategy is to educate voters about transportation congestion, then persuade them to vote for a sales tax to build roads and transit. Credit: David Pendered

The campaign strategy is for MAVEN to educate voters through April. CTM then will start a persuasion campaign to convince voters to actually go to the polls during the July 31 primary election and support the referendum.

CTM first registered with the state campaign finance commission on June 2, 2010. CTM has not filed a campaign disclosure statement and is not required to do so until 15 days before the election, which is set for July 31. A grace period extends the filing deadline to July 23.

CTM spokesman Jeff Dickerson said the organization expects to file a financial disclosure in May. CTM released a partial list of donors to The Atlanta Journal-Constitution, which ran the list Sunday next to an editorial that was generally supportive of the sales tax.

CTM first registered as a non-profit the same day it filed with the state campaign finance commission. The paperwork shows the initial board of directors included three local business leaders: Bill Linginfelter, an area president of Regions Bank; David Stockert, president/CEO of Post Properties; and Sam Williams, president of the Metro Atlanta Chamber of Commerce.

The purpose of the corporation is to advocate for passage of the 1 percent sales tax for transportation. It is not a political action committee, or PAC. Instead, it filed as a ballot committee, meaning that it intends to campaign on behalf of a question that will be posed on a ballot.

This is the same system used by the organization that campaigned for Atlanta’s effort to extend the sales tax for water and sewer upgrades. That organization, Citizens for Clean Water, also registered as a ballot committee.

Stockert now serves as CTM’s CEO and board chairman. Ligenfelter and Williams are not on the board, which now consists of six community leaders.

MAVEN’s three top corporate offices were filled by Renay Blumenthal, the chamber’s senior vice president for public policy. She stepped aside, according to papers filed in January, and was replaced as CEO by Bob Voyles, principal/CEO of Seven Oaks Co.; and as secretary/treasurer by Brad Alexander, now a senior vice president at McGuireWoods Consulting and former chief of staff to Lt. Gov. Casey Cagle.

MAVEN is the more widely known entity of the two campaigns. It is affiliated with two other groups – Transform Metro Atlanta, which provides information about the campaign; and First Friday Transportation Forum, a consortium of nearly 100 organizations that meets the first Friday of the month to learn about efforts involved with the transportation sales tax.

Previous Article
Joel Babbit isn’t sure he even believes in Moments, but finally picked a Mother of one
Next Article
Atlanta Housing Authority board to meet Wednesday; leadership is still in limbo