Jessica Chastain dazzles in ‘Miss Sloane,’ a woman who burns through glass ceiling 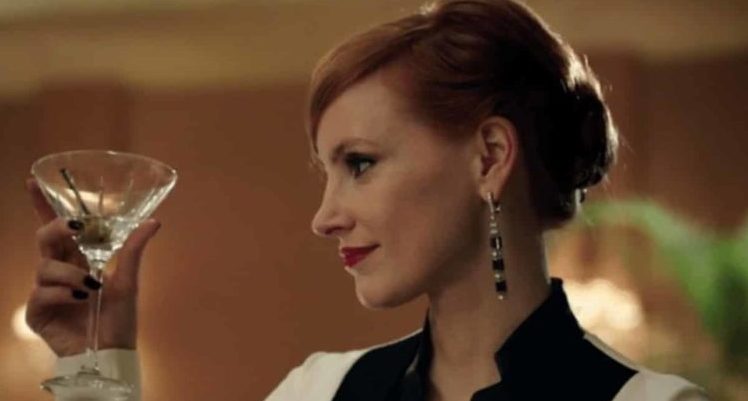 Miss Sloane thrives as a woman in a man's world, amoral and inventive as she burns through the glass ceiling. Credit: awardscircuit.com

Elizabeth Sloane (Jessica Chastain), the protagonist of the lively political thriller, “Miss Sloane,” is one tough cookie. Some might even say of her, “Such a nasty woman.”

No, Sloane isn’t running for president. She’s a high-powered Washington lobbyist, whip-smart and utterly ruthless. And her tactics are as amoral as they are inventive.

Miss Sloane thrives as a woman in a man’s world, amoral and inventive as she burns through the glass ceiling. Credit: awardscircuit.com

Need people at a protest?  Hire movie extras. What if some well-connected fat cat wants a free trip to somewhere nice?  Arrange for a non-profit to pick up the tab.

Her creed, simply put, is: “Make sure you surprise them and they don’t surprise you.”

Sloane certainly surprises her boss (Sam Waterston) when he approaches her with a new client: a pro-gun lobby. They want a woman on the front lines so they can convince mothers that guns mean protecting their kids, not killing them. “Dressing up the pro-gun movement in a pink frock” is how she sees it.

But rather than taking notes, she takes a walk. And takes most of her team with her, the sole exception being a fresh-faced (but potentially lethal) young woman  (Alison Pill) who opts to stay on with Waterston.

Then Sloane stubbornly goes one step further. She joins a small feisty firm that’s working against the gun guys she’s so dramatically shunned.

Most of the picture is told in flashback, framed by a stacked-deck hearing in which Sloane is being raked over the coals by a huffy John Lithgow and a committee of all-white all-male politicos (Anita Hill’s experience inevitably comes to mind). And Sloane just might be found guilty. Because, like many in her line of work, she’s bent the rules just a bit … well, sometimes a lot … sometimes a whole lot…. 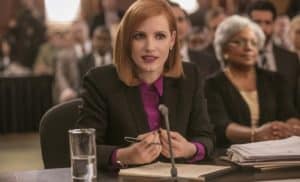 ‘Miss Sloane’ is framed by a stacked-deck hearing that reminds of Anita Hill’s testimony during the confirmation hearings of Clarence Thomas to become a justice of the U.S. Supreme Court. Credit: awardscircuit.com

Admittedly, the early scenes can come off as simplistically leftist and self-righteous. Think, an Al Pacino picture from the early ‘80s. And neophyte screenwriter Jonathan Perera, who’s clearly been brushing up on his Aaron Sorkin 101, initially tends to spoon-feed us in order to make certain we understand what’s going on. But once he settles down, his script becomes more self-assured and his zingers more barbed.

Like Steven Spielberg’s “Lincoln,” “Miss Sloane” is a character study wrapped inside a political battle. What we learn about how things get done in D.C. is fascinating, but hardly surprising to anyone who’s a fan of “Veep” or “Scandal.”

It doesn’t matter because Chastain is stunning. The more we get to know her, the more impressive the movie is. She’s sleek, chic and thoroughly amoral. Plus, she does precisely what her male counterparts do, but in high heels and a feather boa (as they used to say about Ginger Rogers and Fred Astaire)

Chastain’s electrifying, shrewdly honed performance shows us someone who doesn’t worry about shattering glass ceilings. Why should she when a blow touch is so much easier and more effective?