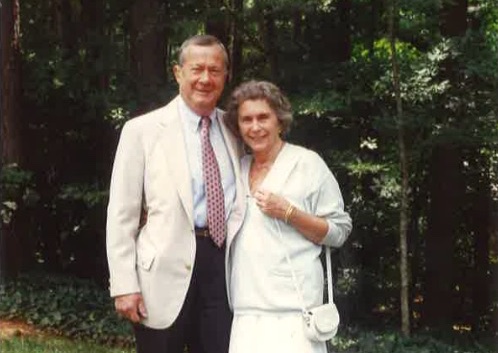 Over the years, Jimmy Sibley and I would joke about the “when I’m dead” column.

He would tell me certain things in confidence, and then tell me in his Southern gentlemanly way that it could go in the “when I’m dead” column.

Well this is a column I never wanted to write.

Jimmy Sibley passed away on Sept. 17 at the age of 96 – telling friends in recent days he was looking forward to being reunited with the love his life, his wife Karen, who died in 2014 at the age of 92.

A service honoring Sibley will be held on Tuesday, Sept. 22 at 11 a.m. at All Saints Episcopal Church. The family will greet guests at a reception following the service. 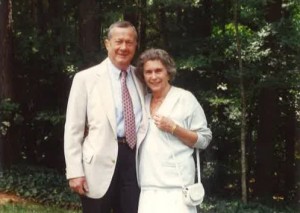 Jimmy and Karen Sibley (Special from the Sibley family)

I remember one of the first times I interviewed Sibley. I was writing a column about the Robert W. Woodruff Foundation, on which he served as a trustee until his death.

“I get to be a philanthropist with somebody else’s money,” he said with a twinkle in his eye.

Sibley was a quiet, but influential, force in Atlanta. When I first started writing a business column for the Atlanta Journal-Constitution, I asked executives who were the most powerful leaders in the city.

People soon started telling me about “the two Jimmys.”

The late Larry Gellerstedt Jr. told me in 1991 that the most powerful man in Atlanta was Jimmy Williams, also a director of the Woodruff Foundation and the Coca-Cola Co. board who later became CEO of SunTrust Banks.

But when I asked Williams, he said the most influential person was Jimmy Sibley, then a senior partner with King & Spalding who had just retired from Coca-Cola’s board.

Of course Sibley said his influence was waning and that Jimmy Williams was more powerful. “He’ll ask the right questions because his mind is so quick,” Sibley said of his longtime friend.

That’s the way it was with Sibley. He never sought the limelight. He much preferred sitting in the background – observing all that was taking plac.e in the city that he loved.

In April 1992, Coca-Cola held its annual meeting in Atlanta instead of its customary spot in Wilmington, Del.

As I entered the large meeting room at the Georgia World Congress Center, I was surprised to see Sibley sitting on the next to last row. After all, Sibley had just retired as a director of the company – and he would have been welcome on the front row.

That was the year when Roberto Goizueta, Coca-Cola’s highly-respected CEO, had just received an award of 1 million restricted shares of Coke stock – then worth $83 million – if he stayed with the company through April 1996.

The magnitude of the stock award had made national news and had become extremely controversial.

As a way to diffuse a possible outcry from shareholders, Goizueta pre-emptively explained his stock award to shareholders saying he would do well only if they as owners of the company did well – that their interests were aligned.

As Goizueta was talking, Sibley leaned over and whispered in my ear:

“I don’t believe a CEO should make more than three times what his secretary makes,” he said.

What a great quote – so appropriate then, and probably even more appropriate today – as I furiously wrote it down.

“You can’t write that,” Sibley said.

“Why not?” I challenged. “You’re retired. What do you have to lose?”

“My friends. My family. My business associates….,” Sibley said. “You can write that when I’m dead.”

They just don’t make them like they used to.

There was a time when executives were aware of how much money they made relative to how much – or how little – money other people around them made.

Sibley was one of those people.

And that’s one of many reasons why I hate to finally have to write Sibley’s “when I’m dead” tribute.