A scene from the movie "Jockey"

For fashionistas, the Big Day (or rather, night) is the first Monday in May, when the Met Gala is held, with star-studded names like Rihanna, Kim Kardashian and Anna Wintour.

For the horsey set, it’s the first Saturday in May when the Kentucky Derby is held, with star-studded names like Secretariat, Citation and American Pharoah.

A scene from the movie “Jockey”

The Derby is the oldest continuously held sporting event in America, and its 148thincarnation is this Saturday. So, the timing couldn’t be better to catch “Jockey,” a 2021 film currently streaming on home video.

Derby glamour isn’t the point here. Writer/director Clint Bentley’s picture mostly takes place at a racetrack in Arizona where veteran jockey Jackson Silva (Clifton Collins Jr.) fights injuries and an aging body in his attempt to keep doing the only thing he knows how to do: ride thoroughbreds.

Two things happen. His usual trainer (Molly Parker) may, finally, have what, for her and Jackson, could be The Big Horse. Not Derby material, but a potential winner nonetheless, a filly described as “a swan with teeth.”

There’s also this new kid on the circuit, a rookie named Gabriel (Moises Arias) who’s been shadowing Jackson. Yes, the older jockey’s expertise factors in, but there’s more to it than that. Gabriel claims to be his son.

Where the movie excels is in its evocation of life on the backstretch, from the early-morning workouts, punctuated by pounding hooves and the animals’ soft snuffling, to the realities of making weight (a career-long punishment) and safely negotiating a field of racehorses hurtling down a track at full speed. 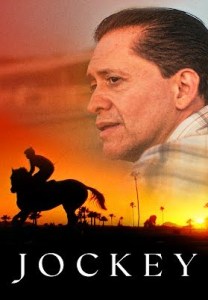 A movie poster for “Jockey”

Much like “Nomadland,” “Jockey” has a documentary feel, mixing, as it does, professional actors and regular folks who actually live the life. The film is full of telling details, from the track chaplain who hangs around the jockey room to rueful war stories of broken legs and punctured lungs.

But there are moments of purely cinematic genius as well. At one point, Bentley shows us an entire horse race by focusing on a jockey’s face.  That’s it. No heaving butts, no straining necks, no steering a large animal at full speed through a small opening. Just a camera fixed on an athlete’s face.

The drama of “Jockey” is, perhaps, more familiar than compelling. After all, The Big Horse is a story older than Seabiscuit (the equine and the movie). And for a picture about one of the fastest animals on earth, “Jockey” can be surprisingly s…l…o…w.

Still, it holds us. Partly through its lived-in feel – you can all but smell the hay and manure. And partly through Collins’ wise, intuitive performance. He’s utterly convincing as a slightly over-the-hill jock, well aware he’s in the homestretch, so to speak, of his career.

Going out in one piece would be great.

Going out a winner, well… they do call it racing luck, don’t they?