The John Ripley Forbes Big Trees Forest Preserve, in Sandy Springs, has been designated part of the Old-Growth Forest Network, a national network of mature forests that are protected, native and publicly accessible. 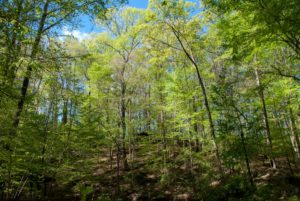 The Big Trees Forest Preserve joins a small group of forests in Georgia to be so designated. They are located in DeKalb County, and in Floyd and Hall counties, according to a page on the OGFN’s website.

The Old-Growth Forest Network has a legacy, and purpose, that is plain and simple: Creating a national network of protected old-growth forests. Founder Joan Maloof wrote that the goal of the non-profit organization that dates to in 2007 is to, help stop the destruction of what old-growth remained, help some forests recover, and enable more Americans to experience an old forest.

Sandy Springs has owned 20 acres of the 30-acre Big Trees Forest Preserve since 2006, when Fulton County deeded the land to the city that was incorporated in 2005. The State of Georgia owns 10 acres.

The designation for Big Trees is the latest commemoration for a tract of rolling, wooded land named after Forbes (1913-2006), who was a lion in the nation’s nascent environmental movement. 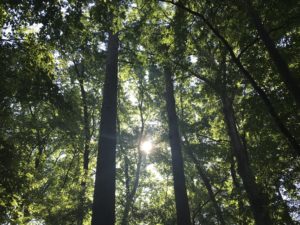 In 1953, Time magazine proclaimed Forbes to be the “Johnny Appleseed of the museum world.” The moniker recognized Forebes’ enthusiasm, and fund-raising ability.

Forbes became a household name in metro Atlanta because of his works in the region.

Forbes came to Atlanta in the go-go era after World War II, working in 1946 to help organize the first Fernbank Children’s Museum. Forbes met and married in 1951 the Atlanta field Director for the Camp Fire Girls, Margaret Sanders. The couple moved to metro Atlanta in 1971, following which he helped establish the Outdoor Activity Center, Chattahoochee Nature Center and the nonprofit Southeast Land Preservation Trust, to help protect open space in the region.

Forbes’ name lives on in the forest he helped preserve from development. This is the story the Southeast Land Preservation Trust tells of how Big Trees came to be: