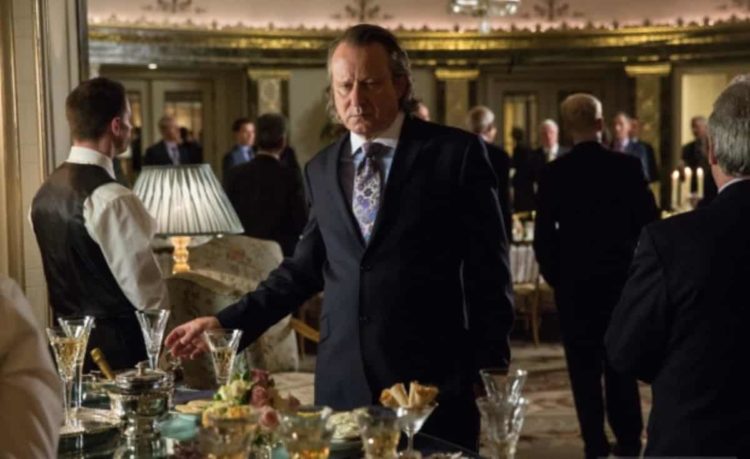 Stellan Skarsgard delivers a blustery performance of a man who knows too much. But it's wasted in a movie that's too blah to support it. Credit: moviestillsdb.com

If you’re having a hard time remembering the title of the movie you plan to review – and you’ve just seen it – well, that probably isn’t a good sign.

Alas, such is the case with “Our Kind of Traitor,” a disappointing bore based on a 2010 John le Carre thriller. The ostensible hero, Perry Makepeace (Ewan McGregor), is a hangdog professor of poetry at the University of London. He and his barrister wife, Gail (Naomie Harris), are on vacation in Marrakesh, where they’re trying to repair their marriage. 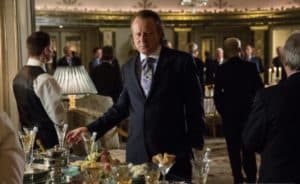 Stellan Skarsgard delivers a blustery performance of a man who knows too much. But it’s wasted in a movie that’s too blah to support it. Credit: moviestillsdb.com

The transgression is his – the usual student-teacher affair – and he’s apologetic.  But before dinner is over, she’s apoplectic and heads back to their room, leaving Perry by himself.

And therefore an easy target for Dima (Stellan Skarsgard) a bear-like force of nature with deep connections to the Russian Mafia. Poor Perry doesn’t stand a chance. An invitation to join the charismatic Dima for a debauched night on the town leads to … well, what things usually lead to in le Carre land: Spy vs. spy intrigue with lots of dirty politics and dead bodies.

A high-living money launderer with a list of names and bank accounts British intelligence would kill to get its hands on, Dima wants to trade his secrets for his family’s safe passage to England. Bespectacled M16 agent Hector (“Homeland’s” Damian Lewis) is all too willing to play ball, but Dima has one special request: Perry and Gail be part of he transaction.

Thus, for who-knows-what-reason (the trained professional’s answer: Otherwise there wouldn’t be a movie), Perry and the initially reluctant Gail agree to help bring Dima and his loved ones to safety. 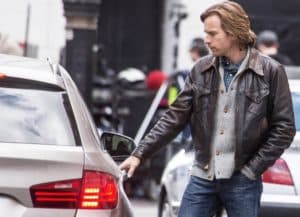 Ewan McGregor never got into the driver’s seat and delivered a performance that’s nothing but relentlessly bland. Credit: aceshowbiz.com

You keep waiting for some – any? – sort of twist.  Is Hector to be trusted? Is Dima? What’s behind Perry and Gail’s sudden transformation from regular citizens to 007 wannnabes?

However, though “Traitor” globe trots to glam spots like Paris and Bern, there is no twist. The movie manages a couple of interesting turns, but nothing really takes you by surprise.  This is the sort of film in which a supposed safe house in the Alps may not – surprise! – be all that safe.

Perhaps the problem is built into the premise, i.e., that a milquetoast like Makepeace (geez, the name itself is a problem) would somehow discover his inner Bond. But Jimmy Stewart did exactly that in “The Man Who Knew Too Much” (so, of that matter, did his movie wife, Doris Day). But McGregor, who can be a shatteringly powerful actor, remains relentlessly bland. And poor Harris is so underused you almost wish she’d been given the chance to hum a few bars of  “Que Sera Sera.”

To his credit, Skarsgard steps up magnificently. His blustery, rip-roaring Dima is a man who does know too much. And doesn’t give a damn as long as the vodka flows and his loved ones are okay. It’s a flamboyant, boisterous performance in a movie that’s too blah and confusing to support it.