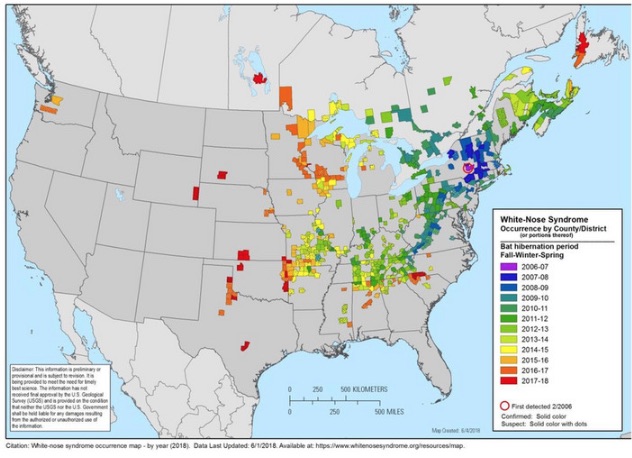 White-nose syndrome has spread across the country from New York, where it was first detected in 2006. Credit: view.publitas.com

Kennesaw State University is on a team that has won a national grant to combat a disease that is decimating the bat population in Georgia and other states. The team is charged with testing methods to eradicate the disease by cleaning bats’ homes in hopes of slowing the spread of the disease.

The disease has wiped out more than 6 million bats nationwide and Georgia has been hit hard, according to a report by the Georgia Department of Natural Resources.

The situation is so severe that the U.S. Fish and Wildlife Service called in March 2009 for a voluntary moratorium on caving in states where the disease has been found. Georgia has developed a response plan and researchers have limited their scientific activities in caves, according to the DNR report, which quoted Wildlife Biologist Katrina Morris:

The white-nose syndrome is so named because it causes bats to develop white fuzz on their face. WNS is caused by a fungus that scientists say was introduced to caves in the United States from Europe, according to a report by the U.S. Fish and Wildlife Service.

The disease was first confirmed in Georgia in 2013 and the number of hibernating bats reported at monitored sites fell by 36 percent the next year, according to another DNR report.

The cleaning that’s being funded by a grant from the National Fish and Wildlife Foundation is to be done in Texas.

The Texas Parks and Wildlife Department is the primary grantee of a $365,642 grant from the National Fish and Wildlife Foundation. The total funding comes to 559,949 counting the matching grant of $194,307. Two sub-awards are included in the grant – one to KSU and one to Lock Haven University, located in central Pennsylvania. 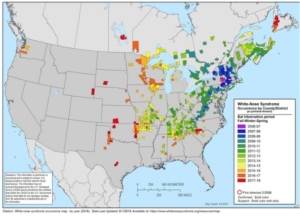 White-nose syndrome has spread across the country from New York, where it was first detected in 2006. Credit: view.publitas.com

KSU microbiologist Chris Cornelison, director of KSU’s BioInnovation Laboratory, is one of the co-principal investigators of the grant.

“Invasive fungal diseases have a terrible history of devastation and without intervention, these pathogens can drive susceptible species to extinction,” he said in a statement. “This reality is responsible for the sense of urgency around white-nose syndrome and the development of feasible management techniques.”

In Texas, the team will treat manmade culverts where the bats roost. The process involves applying high-pressure steam disinfection. In addition, an antimicrobial, polyethylene glycol, will be applied to the surfaces within the culverts to suppress environmental proliferation of the disease. Another process involves applying anti-fungal fumigants, which are being developed at KSU, to the sites while the bats are hibernating, according to KSU’s statement.

Cornelison said the disease-fighting effort is important because of the significant role of bats in the environment.

“Bats represent 20 percent of all known mammals,” Cornelison said. “This evolutionary lineage is a precious portion of Earth’s biodiversity and worthy of significant conservation efforts.”

The grant to Texas is one of four awarded by NFWF. The total award was $1.1 million and grant recipients generated more than $900,000 in matching grants, bringing the total project to $2 million, according to a statement by NFWF.