A view inside the Lake Charlotte Nature Preserve. (File photo)

The Lake Charlotte Nature Preserve, the huge Southeast Atlanta forest acquired last year by the City, has quietly opened to the public.

The roughly 216-acre forest acquisition was approved in April 2020 as a cornerstone of the South River Forest, a vision of 3,500 acres of interconnected green spaces in DeKalb County. Since then, prep work has been underway, and a soft opening came a few weeks ago with no official announcement.

“It really speaks for itself once you set foot in that site,” Stacy Funderburke of The Conservation Fund, a nonprofit that long championed the preserve and helped the City make the purchase, said. “It’s one of the most spectacular forests in the city of Atlanta.”

It’s among the largest “older-growth” forests in the city and features many huge trees, he said. 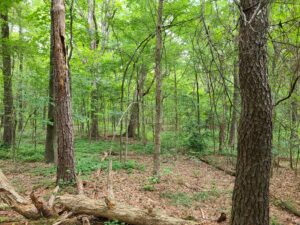 A view from the edge of the nature preserve earlier this year, prior to its public opening. (File Photo by John Ruch.)

“Other parts of town get all kinds of other investments, so it’s great to see the City of Atlanta investing in the most impressive asset this part of town has to offer — its forest,” said Ryan Gravel, the urban planner who helped create the South River Forest concept as part of the City’s “Atlanta City Design” vision. “Lake Charlotte is an essential part of the South River Forest, and also a hint at what is possible if the City wants to truly invest in climate resiliency, public green space, public health, and the value of wild urban lands.”

The City acquired the property through a pioneering use of its tree fund, which developers and property owners pay into when they cut down trees.

Meanwhile, the City’s use of another nearby property intended to join the South River Forest, the former Atlanta Prison Farm, has generated controversy. Planning and protests are both proceeding on a concept of turning that site into a new City public safety training center along with some form of parkland.

As for the Lake Charlotte forest, the City says the opening is a “first phase” with more to come. Right now it includes a “relatively short loop trail,” along with new fencing and a gate, said Funderburke.

The City lists the entrance to the trail, called Woodsey Way, at 3018 Forrest Park Road SE, but the main gate is about 1,000 feet to the north on that road. On-street parking is available along Forrest Park Road near the nature preserve’s signage.

Update: This story has been updated with information about the location of the main gate.