When I attended Leadership Atlanta’s opening retreat two years ago as a new member of the 2020 class, I wrote a column saying I had joined a cult.

The close-knit network of class members and alumni I witnessed two years ago was only reinforced this past weekend when 150 alumni volunteers welcomed the class of 2022 at Camp Twin Lakes.

Nearly half of the 80 members of the 2020 class volunteered at some point over the weekend – giving us an opportunity to re-establish the bonds we had developed during the fall of 2019, the winter and spring of 2020 up until now. 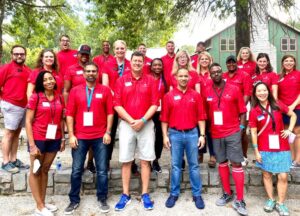 Leadership Atlanta selected members for the 2021 class in 2020, but because of the COVID-19 pandemic and the limitations of holding in-person events, it was decided to skip a year. The 2021 class became the 2022 class. (That has given the 2020 class the unique description of being the longest class ever).

Pat Upshaw-Monteith, Leadership Atlanta’s president and CEO, spoke of the agonizing decisions the organization has had to make over the past couple of years to maneuver through the pandemic.

“When all of this started it was very clear to me that I didn’t want to do a class year via Zoom,” said Upshaw-Monteith, who has been with the organization since 1992. “So much of what we do is interactive.”

In order to hold the in-person retreat, every class member had to be fully vaccinated (a rule set in April). Every class member and every volunteer had to have had a negative COVID test within 72 hours of the retreat. And then everyone was given a rapid COVID test upon arrival at Camp Twin Lakes. Despite all those precautions, class members and alum had to wear masks whenever there were programs inside.

Dr. Kenneth Taylor, a member of the 2022 class, observed that this was the safest gathering he had been part of since the beginning of the pandemic. 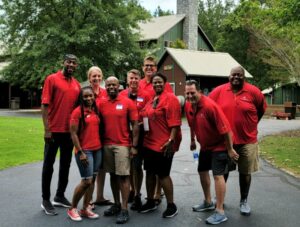 Spending time with my fellow classmates and with incoming class members caused me to reflect on the importance of Leadership Atlanta to the fabric of our community.

One anecdote, fellow 2020 classmate Adam Walker was unable to come to the retreat. But he posted a message to the 2020 class on Saturday through our special WhatsApp channel saying his son was having trouble walking, and that he needed to borrow a pediatric wheelchair so his son could attend school on Monday.

“I reached out and had a wheelchair in my car within 24-hours,” Walker wrote me in a text.

So, what is the special sauce that is part of the Leadership Atlanta stew?

Fellow 2020 classmate Faraz Iqbal, who was one of the volunteers, shared his thoughts in an email saying that our fellowship and bond has gotten deeper since we started our journey two years ago.

“There was a genuine feeling of love between the class members – just being able to hang out and talk about anything (literally anything),” Iqbal wrote. “Topics ranged from family/personal life, to work to how do we continue the work to dismantle racism. The latter discussions were being discussed with the same fervor as when we were discussing in our study groups and our workshops. I think the difference now is that people are putting in the effort beyond the talk. People are pushing the envelope in their respective areas of influence to make a difference. People want change. I felt inspired and blessed at the same time. Of course, change will take time, but walking away from the retreat I felt uplifted and hopeful.”

Historian Jamil Zainaldin (Class of 2001) and president emeritus of the Georgia Humanities Council, credited Leadership Atlanta and its network for helping keep the city on an even keel during times of racial tensions.

“Leadership Atlanta is an affair of the heart,” said Zainaldin, who regularly gives an overview of Atlanta history to each incoming class at the retreat and talks about the “complexities” of Atlanta. “It is a one-of-a-kind organization. There’s something about Atlanta, and there’s something about Leadership Atlanta. You are challenged to think about the place where you live. When your eyes are open, a light can turn on. It’s about having a conversation mid-career. Race is at the center of all of this. Leadership Atlanta is a place where we can go to have that conversation safely.”

Leadership Atlanta has been criticized for being too focused on the dynamics between white Atlanta and Black Atlanta while not giving enough attention to the Latino/Hispanic and Asian American populations or other groups, such as LBGTQ.

From my perspective, it’s all part of the evolution of Atlanta. I went back and looked at the original class of 1970. Of the 46 members, it appears only one member was female.

Of the 77 members in the 2022 class, 34 are female. Class members also are racially and ethnically diverse, and I would venture to say the yearlong programming of Leadership Atlanta also will become more diverse as the city continues to evolve.

Kathy Waller, retired chief financial officer of the Coca-Cola Co. and a director of Delta Air Lines, is one of the 2022 class members, wrote me in an email that everyone she’s met who has gone through Leadership Atlanta has called it transformative. She shared her impressions after this weekend’s retreat.

Leadership Atlanta alums get ready to welcome the 2022 class (Special)

“There are two impressive sights from the moment you arrive,” Waller wrote. “One sight is the sea of red shirts present and active at 7am on a Friday morning. The red shirted people are the alumni. I met alumni from the early 2000’s to the class of 2020.  I found it impressive, and I think it speaks to the true value of the program that so many incredibly busy alums actively participate in the support of the program and in ensuring the next class has a similar exceptional experience at the opening retreat and throughout the program year. The second sight is how visibly and actively Delta Airlines is committed to ensuring an exceptional Leadership Atlanta experience for another group of people who will eventually do great things for our city through their community projects and after they graduate from this program.”

Waller explained that because of the one-year delay, the 2022 class used the year to get together in small, virtual groups.

“In those small groups we started the process that I suspect in a normal year, starts with the opening retreat,” she wrote. “By the time we all got to the opening retreat we already recognized the opportunity and the responsibility afforded to us as part of the next Leadership Atlanta class, and we are all in it for all the right reasons.”

My friend, Annie Hunt Burriss, a professional who has worked in the space between economic development and academia, who is in the 2022 class. She asked Doug Hertz, founder of Camp Twin Lakes, about the status of “the Atlanta Way,” often given as the reason why Atlanta did not have as much racial unrest as other cities in the South.

She said Hertz responded that new CEOs in town realize Atlanta operates differently than other major cities because of its cultural mindset. “He closed by saying it’s why Leadership Atlanta is important and needs to help cultivate and expand that mindset,” she wrote. 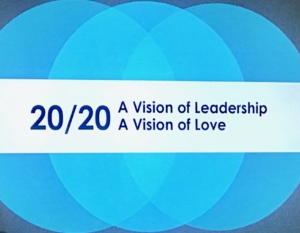 That caused me to think of the relationship between the words: “cult” and “cultivate.” Yes there is a connection, one that Leadership Atlanta has leveraged over the years.

“Over the 52 years, 4,000 people have gone through this program,” Upshaw-Monteith told me. “I do feel like Leadership Atlanta has had a lot to do with Atlanta not having the racial outbreaks that other cities had.”

Classmate Faraz Iqbal zeroed in on his experience with our class.

“I know every class probably says this about their class, but the class of 2020 is magical,” Iqbal wrote in an email. “It’s hard to describe why, sometimes it’s hard to describe a feeling, and this is one of those times for me. I do know that I feel this class will continue to be part of a greater cause that will enact positive change. I’m a changed person going through Leadership Atlanta and being part of 2020. I can also say that by going through this process my family is also changed. A phrase that will always stay with me: A vision of leadership. A vision of love.” 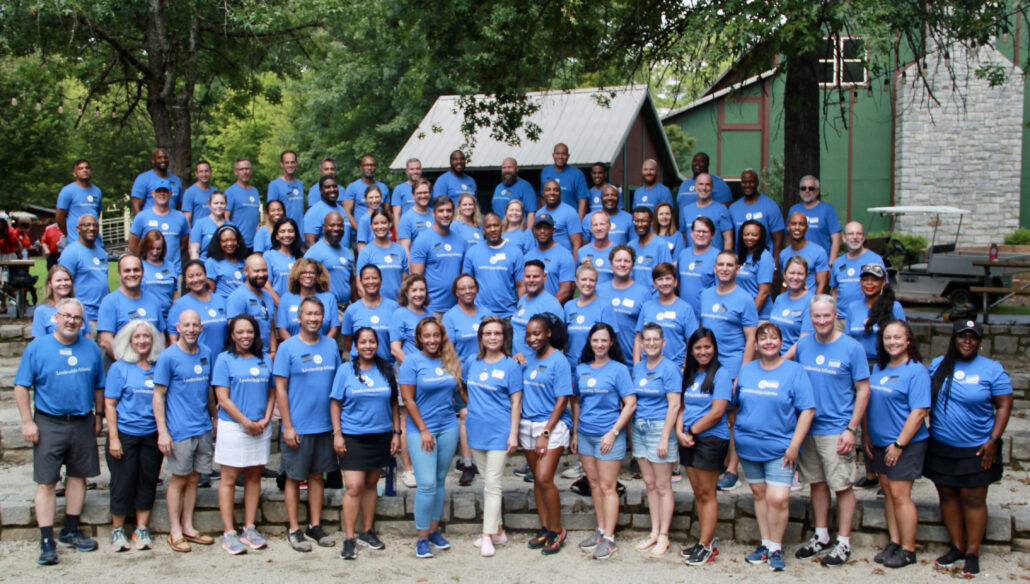 Previous Article
Endless water war: Army Corps still an issue in tri-state dispute
Next Article
In debate on saving a historic West End house, everyone can agree there’s gotta be a better way